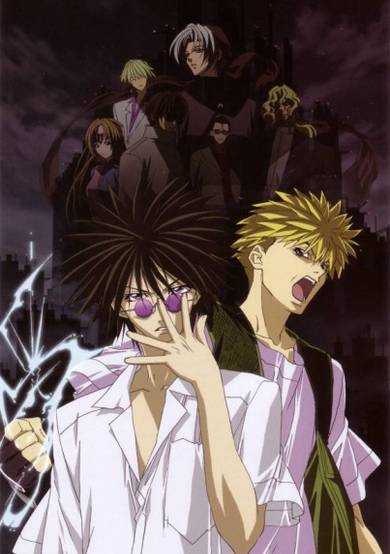 Mido Ban and Amano Ginji are known as the Get Backers, retrievers with a success rate of 100%. Whatever is lost or stolen, they can definitely get it back. Despite their powerful abilities and enthusiastic behavior, Ban and Ginji are terminally broke no matter what they do simply because few people would actually desire to hire them. As a result, the pair of them tend to do dangerous jobs, often leading to unwanted re-encounters with their old (and dangerous) friends.
User Count7806
Favorites Count55
Start Date5th Oct 2002
Next ReleaseInvalid date
Popularity Rank1460
Rating Rank2279
Age RatingPG
Age Rating GuideTeens 13 or older
SubtypeTV
Statusfinished This episode introduces Ban Midou and Ginji Amano, aka the GetBackers. Their recovery service is "a near 100% rate", meaning they can't fail at recovering things. Things get wild when a schoolgirl named Natsumi loses her toy kitty when a cop sees her in the alleyway. The cop was giving "information" to some gangsters and he thought she took a picture of him (she was really taking a picture of an alley cat). Ban and Ginji accept the case. After failed plans, car tows, and parking tickets, the Getbackers finally retrieve the stolen object, but Natsumi has been captured by the cop and gangsters. The Getbackers rush to the scene. Now the Getbackers aren't just a pretty face, they obtain incredible powers. Ginji was once known as "Raitei" (The Lightning Emperor) at the Limitless Fortress (more on that on later episodes). He is able to summon lightning from his body, like an electric eel. Ban Midou has a few tricks: First, he has a 200 kilogram force grip and second, has a power called the Jagan. Ban's Jagan gives the recipient a horrible dream for one minute. Anyway, Ban uses the Jagan on the crooked cop. The dream contains the cop killing both Ban and Ginji, Natsumi faints, and the SWAT team arrives. The cop tries to tell them that he's a cop, but gets shot to death. Once he wakes up, Natsumi is with the Getbackers and the cop is arrested (supposedly). Later, Natsumi obtains a part time job at the Honky Tonk, a place where the Getbackers hang out, but can't eat because of their tab is too high. 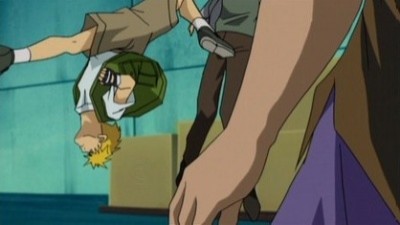 Get Back The Rusted Bonds!

Ginji and Ban are out of jobs and are starving to death but are rescued by a hobo who feeds and shelters them, later revealing he use to be a factory owner but due to continuous recessions and pressure from the yakuza his daughter is kidnapped. He then asks Ginji and Ban to get back his daughter from the yakuza. After breaking into the mansions to save her, the daughter betrays Ginji and Ban admitting that she has every thing she needs from the yakuza. However, the yakuza admit that they planned on taking her and that they forced her father to sell her. After a short battle with help from the Evil Eye, she runs to her father who suffers a fatal heart attack. The Getbackers are ordered to get back a box that's being guarded by a mysterious group of professional transporters. Three new characters are introduced: Kuroudou Akabane (Dr. Jackal), Himiko Kudo (Lady Poison), and Maguruma Gouza (Mr. No Brakes). The Get Backers fight it out with Doctor Jackal, Mr. No Brakes and the mysterious girl from Ban's past, Himiko. We find out that Ban killed her older brother. Ginji is captured and the professional transporters escape in their truck. In a flashback, we find that Ban, Himiko and her brother, Yamato, were a former recovery service. Ban goes to rescue the captured Ginji. 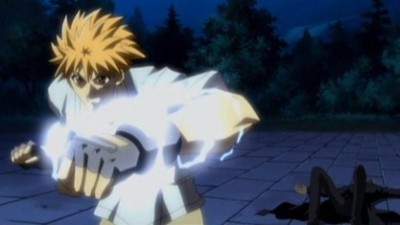 Deathmatch at Sunrise: The Lightning Emperor vs. Dr. J

As The GetBackers return with the package, the semi comes charging through the alleyways, eventually being cornered at a shrine. After a big battle, Ban renders Himiko unconscious and Genji pulls all the knifes out of Jackal using electromagnetic powers and then they take off with the package. As they near their destination, Ban realizes, a little to late, the Himiko used timed perfume on them to paralyze them. As Genji lays stunned, the semi comes rolling in and as all hope seems lost, Ban uses the Jagan on a flock of birds to make them swerve away. After they return the package, they are both given one tenth of a platinum melon. 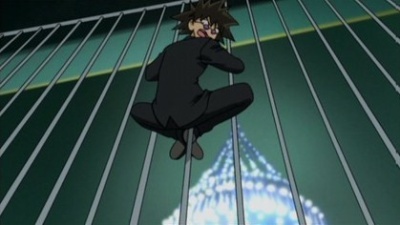 Get Back The Devine Melody

After a morning incident with a blind violinist, she seeks the help of the get backers, one of whom saved her! Ginji and Ban are asked to retrieve a valuable violin. Later they realize they pretty much have no choice! 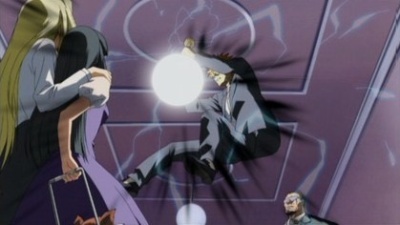 The Animal Transformation of The Beastmaster

Soon after the get backers infiltrate the mansion to the one who took their clients violin every thing goes to chaos! Ban fights one Ginji's old friends. One of the former Four Kings of the VOLTS - Shido Fyuuki, the Beastmaster - while the others look for the violin. 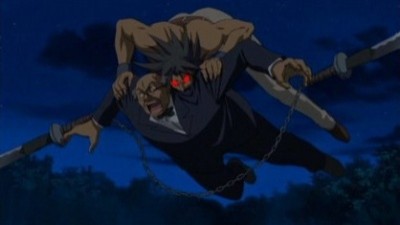 Ginji electrifies himself, shocking Hishiki until leaving him unconscious. Ginji apologizes to Ban for causing Shido to attack the group, as he blames himself for abandoning Shido. As Ban and Ginji try to find Shido, Hevn and Madoka help out as well. Ginji tries to help Shido who asks him to fight alone. After defeating Kurobe, Shibo discreetly commands Mozart to steal the Stradivarius violin and return it to the estate. Madoka, in turn, says that she will allow herself to play a regular violin during her performance in the evening. Later on, Shido returns the Stradivarius to Madoka. In return, Madoka offers to perform for Shido in the streets in the afternoon, attracting Visconti, Madoka's violin teacher. Visconti later compliments her performance with the others, jokingly noticing that Madoka is in love with Shido. Later in the evening, before a performance, Ban uses the Evil Eye on Akutsu, thereby ruining the performance. The next day, Shido hangs out with Madoka in her backyard as both start getting closer. 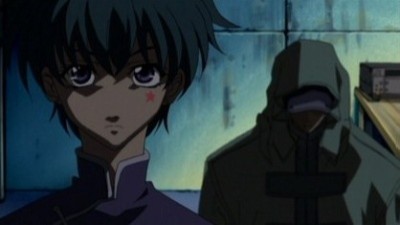 Get Back The Phantom Sunflowers! Part One

They receive a job by a mysterious person named Clayman and are to take back the painting of Van Gogh's sunflowers as there is believed to be a thirteenth sunflower upon it! 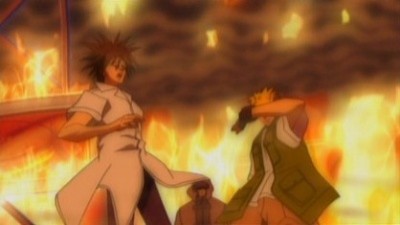 Get Back the Illusive Sunflower! Part Two

They receive a job by a mysterious person named Clayman and are to take back the painting of Van Gogh's sunflowers as there is believed to be a thirteenth sunflower upon it!

I remember this anime back when i was in middle school. I remember it being freaking awesome and the fighting styles are pretty cool.

Start a new discussion for GetBackers anime. Please be fair to others, for the full rules do refer to the Discussion Rules page.