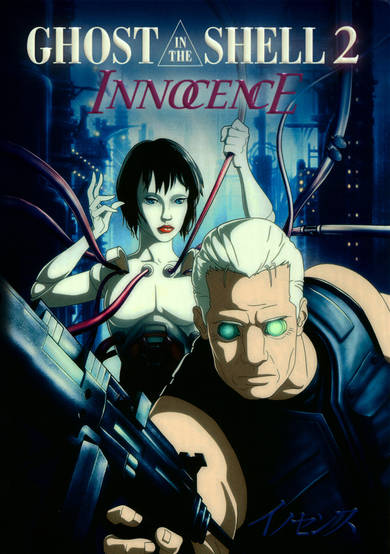 Ghost in the Shell 2: Innocence

The heavily cyborged police officer Batou, newly partnered with the mostly-human Togusa after the disappearance of Major Motoko Kusanagi, is assigned to investigate a series of murders committed by prototype "sexaroids"—female androids created for sex. (Source: ANN)

All Ghost in the Shell 2: Innocence released episodes

Ghost in the Shell: Innocence, is the sequel to the movie Ghost in the Shell. It was released in 2004 by Production I.G, who are known for many other works, such as Psycho Pass and Guilty Crown.Story: The story of GitS 2 doesn't depend on the first movie as much, as you might think considering it's something like a sequel. After the Major vanished, Batou and Togusa, are investigating a series of murders commited by Androids that kill their owners, before comitting suicide. The story is just as complex as the one of it's prequel, but a bit better to understand.8/10Characters: The characters are pretty much the same as in the first movie with the sad exception of the Major. It is not much to say since we simply dive a bit deeper into those we already know.8/10Visuals: The visuals of the 2nd GitS movie are outstanding for it's age. Another great work by Production I.G. at this point. The Animations are always fluent. It does use a whole lot of CGI, does this in such a good way, that I wouldn't have expected by something that got released in 2004 (if you consider that the dragon from Fate/Stay Night got released in 2006...what a shame). The backgrounds look gorgeous too and the character design isn't bad.9/10Sound: The Soundtrack at this point was composed by Kawai Kenji, who we know from such titles as Higurashi no Naku Koro Ni and Fate/Stay Night. The music always fits the scenes, and has some parts that are really good. But in total nothing too memorable. I didn't watch the sub, which I don't like to comment on normally. I actually watched the dub of this and have to say, that it is surprisingly good in my opinion. With the best performance having Richard Epcar as Batou.Enjoyment: In total, GitS2:Innocence has a pretty good mistery story about characters we all learned to love. If we include the art to this one it really does become quite a good movie and is of course really enjoyable.8/10

While conceptually brilliant, this film suffers from somewhat lackluster execution. Overall a disappointment compared to the otherwise exemplary record of the franchise. Despite this, the film still carries enough philosophical weight to interest those who do not mind dialogue heavy narratives with less emphasis on action. The main philosophical quandary of the film is the increasing arbitration of the distinction between man and machine. Innocence depicts a universe wherein humans have begun using androids as supplements to roles filled by other humans. The demand for more realistic dolls most likely came from those involved in the sex droid industry. The drive towards more humanlike dolls seems to allow the dolls, once created, to develop sentience. Early on in the film, and in fact throughout much of the latter parts as well, the theory was advanced that through immensely humanlike dolls spawned from the ingenuity of humanity, the androids could achieve sentience as autonomous entities, attaining ghosts(essentially human consciousness) by the sheer mechanical prowess of their designers. This notion was hinted at in the first film as well. The dialogue in this film contains references to many things, such as religion and fantasy, and some philosophy as well. This sounds like a delicious combination for a pretentious bastard such as myself, yet once again execution bogs down an aspect of the film. The problems are two, realism and pacing. The dialogue feels stilted. Many lines seem like something that no real person would ever say, while others appear to be blatant attempts to shoehorn in the vernacular, which can throw off the rhythm of a conversation. Perhaps this is just an issue with the dub, however, seeing as how the main cast from the first film and Stand Alone Complex returned for Innocence, this seems unlikely. The second problem is the pacing of said references. The characters all reference something or other, and often multiple times within the same conversation. These references fly by, some even seem to have little correlation to the themes of the film, though a scant few are rather poignant. Yet I endured both of these problems in the hopes that some greater contextualization would give me that cathartic moment of philosophical enlightenment that Innocence was allegedly supposed to inspire in the viewer.  This moment never really occurs, unfortunately. This is a film that requires multiple viewings to fully contextualize and compartmentalize the information. Not because the film is intricately layered, mind you, rather because of the bullet-pace at which these seemingly meaningless references are hurled at the viewer. Thus, Innocence requires re-watching, however the aforementioned issue of stilted dialogue may serve to dissuade one from undertaking this arduous task. As always with the Ghost in the Shell franchise, Innocence is visually stunning. The staff at Production IG clearly spared no expense agonizing over the details and sheer quality of this world. A difference must be noted between this film, and in fact the first as well, and Stand Alone Complex. Both films in the franchise have a much, much darker atmosphere and tone than the series. This definitely gives style points and establishes both films as visually unique entries in the franchise.

Start a new discussion for Ghost in the Shell 2: Innocence anime. Please be fair to others, for the full rules do refer to the Discussion Rules page.