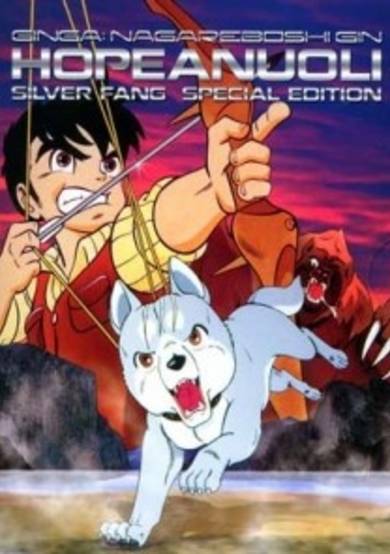 Gin is a silver Tora-ge named after his coat color. Shortly after being born, he watches his father, Riki, get killed by Akakabuto, a bear that terrorizes everything in his path. Being the third-generation of bear-dogs to try to stand up against Akakabuto, he ventures out to find dogs to join him in his fight.

The Little Hero... Gin Is Born!

Gin! Beyond the trials, tomorrow awaits!

The life-saving friendship of Gin!

The Challenge of giant Bear, Akakabuto!

Howl! The Mountains are calling!

Engraved into your soul! The burning oath of the soldiers

Now! The departure of the fighters!

[(From my blog).][1] True anthropomorphism is very difficult for most people to swallow. But the only functional difference between this anime and something like Fist of the North Star is that the main characters happen to be canine. If you can get over this however, what awaits is one of the most original, heroic and brutally violent adventures of the anime medium. **<u>Anthropomorphism</u>** There are almost no films about a serious animal tale. The concept is difficult to grasp even in theory - how can it be anything but utterly ridiculous? But characters in Fist of the North Star have ridiculous powers. The characters in Ghost in the Shell are androids. In this universe - dogs are ultra smart and ultra capable. Their speech is translated. Is this an impossible thing to accept? No... the Japanese have been able to do it for years. If you can get over the talking dogs aspect of this series (and it took myself a year after dropping it to do so), a truly original story awaits you. We see characters with a brand of morality unlike any other - a sense of purpose unlike any other. It's a worthy story and has been remembered as such. **<u>Purpose</u>** As a warrior, your purpose is linked to your mortality. Warriors often fight to fight another day over the course of a life of war. You have time to evaluate your fight, time to think of your future exploits, time to think about love and romance in-between. Wild dogs don't have this luxury. These dogs have short lives to begin with - and with this sense of mortality comes a sense of purpose. They have enough time to dedicate themselves to one goal, or to sacrifice their lives to other hounds. If you're lucky enough to find a mate it is only to further your line - there is no time for love. The wild dogs in this story have decided on a dangerous path - to defeat the bears on Ou mountain. For this purpose (and realizing that many will die) they spend the majority of the series recruiting dogs from all over Japan. Sacrificing your own life to recruit dogs stronger than yourself is worth the risk to complete the grand goal. This leads to very strong character development - when dogs begin to utilize their limited mortality for greatness, almost like vikings. Dogs also have a great sense of loyalty (as is famous of them) and the selfless teamwork between the dogs is very inspiring. It also means they can be stubborn - following a bad leader out of misplaced loyalty and refusing to join another, possibly greater cause. The only way to convert a dogs loyalty is to defeat them in combat and many "boss" fights take place though the series. <u>**Blood and Snow**</u> This series is extremely violent. It's not just the sheer number of characters that are massacred over the course of the series, but the visceral nature in which it occurs. Limbs are ripped, heads decapitated, guts slashed. This series glorifies violence, in the sense that the characters are defeated in the most gruesome manners possible. After all, humanity isn't an element here. The winter Forrest setting of the series is very atmospheric - especially for fight scenes. You don't know whether the bear is in a tree or behind a rock when a blizzard reduces visibility to barely a meter ahead of you. It also gives the series a "lone wolf" feel at the beginning, when It's just one man and a dog against the foreboding elements and monsters. <u>**Music**</u> The music of this series is excellent. Tension-inducing violin tremors, triumphant trumpeting battle songs, evil electronic lair themes - the OST of this series is very kind to the ear and full of apocalyptic vitality. The music gives the series a classical theme and rounds the structure and events of the series - almost turning it into a viking opera. <u>**Conclusion**</u> A series like Ginga Nagareboshi Gin is unlikely to be repeated even in concept, perhaps because a tale of animals is difficult for Humans to get into or perhaps because this series really has mastered it. If you're open to a different type of story and you think you can listen to talking dogs - try this. [1]: http://seaofstars.co.za/index.php?/archives/13-Ginga-Nagareboshi-Gin;-Silver-Fang-1986.html

GNG is the best shonen anime i have ever seen (I haven't seen FMAB yet). Great story, animation is great for it's time, audio is pretty good but maybe too quiet, characters are some of the best in anime in general, only anime show that was better experince to me than this is AoT. Overall great anime and pretty unknown in almoust everywhere because most of people that has watched this anime are swedish or finnish or japanese. If you are, let's say american then please watch this show!!!!

Start a new discussion for Ginga Nagareboshi Gin anime. Please be fair to others, for the full rules do refer to the Discussion Rules page.