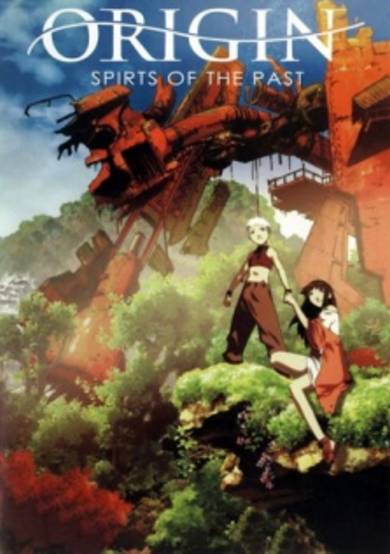 Giniro no Kami no Agito

A failed DNA experiment with plants has changed the world forever. Having demolished the moon, the intelligent and aggressive plant-life has spread to the earth and destroyed the human civilization. The few humans that remain struggle to survive, while maintaining an uneasy truce with the restless forest. One day, a villager named Agito stumbles across a stasis unit hidden deep in the forest and awakens a very cute girl from the past. Having slept for the past 300 years, Tula steps into a very different and strange world. The neighboring high-tech village of Ragna is still locked in a bitter war with the forest and when they become aware of Tula, they realize that she is the key to activating her father's final and ultimate weapon of humanity—a weapon designed to totally destroy the forest. When Tula is taken by the warriors of Ragna, Agito makes a pact with the forest to gain the strength and incredible powers to not only save her, but to stop the weapon from destroying both the forest and his village. (Source: AniDB)

All Giniro no Kami no Agito released episodes

*Giniro no Kami no Agito* (A.K.A. *Origins: Spirits of the Past*) is like watching a baby take his first steps and tumble headfirst down a flight of stairs- it starts off beautifully and manages to get worse and worse until it passes the threshold from "so mediocre it's embarrassing" to "so bad it's funny" and on into "so bad it's insulting my intelligence". *Origins* is set in a postapocalyptic world in which humans grapple with vicious mutant plants; the whole setup is a little reminiscent of *Nausicaä of the Valley of the Wind*, with a few changes. Overall, I really wanted to love the world of *Origins*, and initially, I did. The film's protagonist, Agito, is your average plucky shonen main character- cheerful, slightly mischievous, lively- mostly there for the film to have a hero. I didn't take issue with Agito- I rather liked him, and was drawn into his life in a little village, where he tended to his father, who was slowly turning into a tree. One day, Agito discovers a mysterious underground ark turned mausoleum, where thousands of people lay in a sort of high-tech hibernation. Unfortunately, all but one of these people have died. The sole survivor is a mysterious girl (Tula) who*, surprise*, becomes the protagonist's love interest. It was a sad and predictable cliché to see a girl born a few centuries ago, at the end of her world, to wake up in what is entirely another and have a somewhat minimal reaction to what is essentially an alien environment, but being completely alright with it and falling for the protagonist. It's one of many things that went wrong in this film. I'm going to stop talking about the world and story here, because the grand finale of this film is so stupendously stupid that it begs to be seen. Aesthetically, I adored it- [this song drew me to the movie][1], and I was blown away by the film's intro- I really thought I was in for a treat. I have to give *Origins* credit in this aspect- the absurd final few scenes of the film are made watching by their visual fidelity and fantastic music. If you enjoy dramatic, grandiose pieces with strong vocals, you might want to check out the music of *Origins*- it's worth buying the soundtrack. My main gripe with *Origin*s wasn't just that it was awful, but that it started off so beautifully. It's as if I woke up and was suddenly draped in a fine silk robe by incredibly friendly surgeons, only to wake up in a tub of ice an hour later to the realization that I'm hallucinating and my kidneys are missing. Overall, this isn't a film I'd watch again- not without friends. If you enjoy laughing at movies on account of their being awful and breaking the laws of logic, or if you enjoy movies that have gorgeous scenery and great music and don't care much about the story, give *Origin* a look. Otherwise, you'll want to call it a pass. [1]: https://www.youtube.com/watch?v=6k2b3cvb9tc

I can summarize this anime really quick: Because the forest! It seemed rather good at first, but shit its the fan and isnt explained in anyway, but dont worry because the forest

Personally I liked this movie VERY much, and I suggest to anyone who might either like this type of style, story or genre (sci-fi), I suggest that they watch it. It has  a good concept, however anyone will/ would interoperate it as.

To sum the story up, it's all about: Tuuuuulaaaaa! Could have become a good movie, though. Well.

Origin: Spirits of the Past follows Agito in a world where humans and the forest no longer live peacefully. In Agitos attempt to get extra water for his father he is caught by the forest and in his attempts to escape he stumbles across, Tula a girl put to sleep inside of experimental coffins in which people from the past can awake in the present day. Throughout this series you see humans struggle against the forest or so they thought. This is a heart warming story of preservation of humans, the earth, and a love story of two kids from another time. I personally think this series is fantastic with a great art style for the time. Along with a great story and characters to grip you into the story. There are very few minor things I didn't really like I'm not sure it really held up with time. I still really did enjoy the series anyway, I love the meaning behind the story and really recommend this film.

This movie is....an awkward subject to be honest. >.> World wise I love it, the Dryads have a cool design, the characters are likeable, but it sort of has one of those "I want to like it" feels. I loved it the first time I saw it and I was so into it that I asked a friend to watch it with me, but then when I did I started to feel a bit embarrassed, seeing a lot of issues the second time around. It draws things out a bit too much in some parts, has really unusual imagery that is meant to seem meaningful but comes off more pretentious. I can't bring myself to say it is a bad movie, it has so much potential in it to be interesting, but the way they go about it makes things feel a bit forced like they wanted it to be so much more than an interesting tale. They clearly did as well, and though I have nothing against making a story hold meaning, trying to slide that meaning in where it doesn't belong hurts this movie more than it helps.

Start a new discussion for Giniro no Kami no Agito anime. Please be fair to others, for the full rules do refer to the Discussion Rules page.