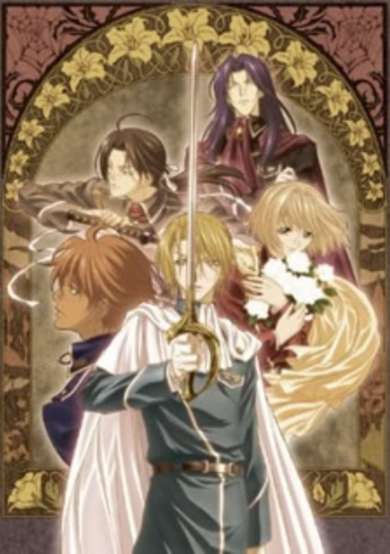 The first season begins with introducing the characters, their past and their ambitions. Orpherus, Eduard, Camus, Lui, and Naoji are five noblemen who attend the prestigious Rozenstolz academy, and who are a part of the Strahl class—a class for potential candidates for the advisory positions in the royal palace in the small European country of Kuchen. Isaac is an English writer who visits Kuchen. While still students, the five noblemen are forced to deal with corrupted politicians, secret agents, attempted murder and ambitious individuals from both inside and outside of school who threatens to break the fragile peace in their country, and even assassinate the king.
User Count845
Favorites Count0
Start Date4th Nov 2004
Next ReleaseInvalid date
Popularity Rank5126
Rating Rank6788
Age RatingPG
Age Rating GuideTeens 13 or older
SubtypeTV
Statusfinished

Orphe has a dream about the day his sister died. He is in a foul mood when he wakes, and is swept into an argument with Lui. A few days later a note is spread in the academy revealing the fact that Ed is not of noble blood by birth and that he is his father’s bastard son. Orphe, sure that Lui is behind it, challenges him to a duel.

Ed remembers the time he came to live with his father, and his step mother’s hatred. He is pining for his lost sister, who was sent away. One day in the town he encounters a girl with the same name as his sister, who tempts him to run away with her. It is later revealed that the girl was hired by his step mother to tempt him to break the academy rules and consequentially being thrown away, but Orphe and a mysterious man helps him out. Lui refuses to allow the headmaster to check the dormitory for the missing boys, claiming that they should govern themselves.

Camus tells Ed and Orphe about his childhood and his first meeting with Lui. A graduate of the academy, Victor Griffith, visit the academy. Camus, who has a special ability to sense both people’s emotions and see into the future warns one of his classmates of approaching misfortune but is treated with fear and hatred in return. Griffith tells Camus he has the same ability and offers him to come with him and live a sheltered yet exciting life, but his motives are not as pure as they appears. Orphe and Ed meet the man who helped them the last episode, and learns that his name is Isaac.

Naoji remembers his family away from Japan, and begins to have doubts regarding his right to belong in the Strahl class. The headmaster holds a simulations turnery and wants Naoji to fight with Orphe, but Naoji’s doubts effects his performances. In an attempt to encourage him Ed takes Naoji to town, where they are approached by an inn keeper who invited them to visit a Japanese man on his death bed. Naoji stays with him all night and through that man’s autobiography finds his strength back.

Lui’s father calls him back home to attend a ball where he is introduced to a local beauty, the daughter of a nobleman that Lui’s father wants Lui to marry. Lui agrees, while his friends try to persuade him against it. At the engagement party, the king’s elder brother makes an appearance but soon after he leaves an explosive device is set off and only through Orphe Lui is saved. Lui cancels his marriage, having achieved his goal to make the family’s rivals tense with his approaching beneficial political marriage.

Isaac visits an old friend of his, wanting him to write him a recommendation letter that will get him into Rosenstolz. Claiming to be a foreign writer who writes about the academy, Isaac talks to the students, but is disappointed with the Strahl class. He tells them about his time as a soldier. Someone breaks into the headmaster’s office, and Orphe and Lui chase them but get locked in a warehouse. Isaac confronts other undercover agents like him, and refuses their hush money in order to save Lui and Orphe.

The Headmaster plans a game to alleviate the stress on campus. Orphe and Naoji are paired up for the game, and have their first serious talk. Naoji tells Orphe why he is such a good friend of Lui. They find the lost object, a key, while not even looking for it. The headmaster shows them that they key is actually a key to his secret safe where he stores news from the academy alumni from all over the world before relaying it to the king.

A recording device is discovered at the school. Due to a student exchange Naoji and Ed are sent away, while the academy hosts three students from a sister school. One of the students is a girl names Ishtar whose charismatic speech enflames the entire school, but makes Camus uneasy. She admits that her goal is to use the students’ sympathy in order to get into Rosenstolz and bent the management to her will, and in a surprising act Lui joins forces with her. When Ishtar admits to Lui that she wants to take over the king’s position Lui reveals that he never was on her side and threatens to uncover her if she will not leave immediately.

It’s Orphe’s sister’s memorial day and in an attempt to cheer him up Ed takes him to a walk to town at night where they meet up with Isaac, who brings them to a local pub. Orphe meets with the local drunkard Douglas and discovers the tragic circumstances of his life, but he is forced to decide between the memory of the dead and the living when Douglas steals his most precious possession.

A graduate of Rosenstolz Academy is disturbing the students with his offers of unimaginable pleasures. The five Strahl candidates set out to meet up with Josef Torger, but Orphe is surprised with what he discovers. Torger tells Orphe that his money comes from blackmailing the noblemen and politicians of Kuchen, and gives him a notebook with a documentation of those people’s illegal activities. Headmaster Bartholomew goes to Torger’s mention himself and offers Torger a teaching position in Rosenstolz, but Torger refuses, leaves Orphe his notebook and sets himself and his house on fire.

Start a new discussion for Ginyuu Mokushiroku Meine Liebe anime. Please be fair to others, for the full rules do refer to the Discussion Rules page.