All Shuichi ever dreamed about was following in the footsteps of his pop idol, Ryuichi Sakuma and the band Nittle Grasper. Together with his best friend Hiro, Shuichi's formed a band called Bad Luck and they've even managed to get signed to a major recording label! Unfortunately, the studio deadlines are looming and Shuichi still hasn't finished the lyrics for any of the songs. What he needs is a little inspiration... but he's been running a little low in that department lately. While Hiro recommends finding a girlfriend, fate has other things in store for him... Walking through the park late one night, Shuichi's latest lyrics flutter away and land at the feet of a stunning stranger that takes his breath away. Unfortunately, that mysterious stranger happens to be the famous novelist Eiri Yuki, who completely crushes the young singer by telling him he has "zero talent". Now, Shuichi's so annoyed that he's managed to finish his song just so he can find and confront Yuki once again. But, are his actions really motivated by anger, or has he actually fallen in love? (Source: RightStuf) 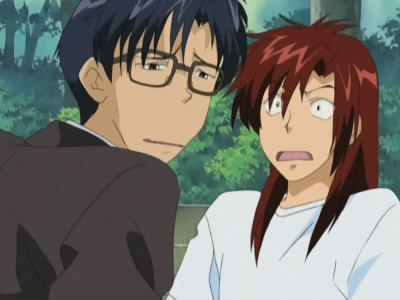 Shindou Shuichi is the main vocalist of the new band "Bad luck". One night as he was walking home through the park, his lyric sheet flew out of his hand, and was caught by a mysterious blond haired man. He makes a snide comment, and this leaves Shuichi anxious to find out who he is. He later sees the same man in his car and jumps in front of it to stop him so he can confront him about his nastiness. The man takes him home and gives him a towel and more insults. When Shuichi comes back to confront him again, he gets a kiss... Is this a new beginning for Shuichi or just a quaint misunderstanding? 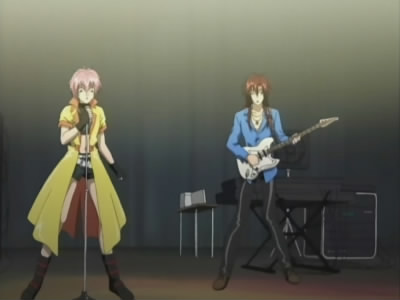 When Shindou is taken out of his band practice, Yuki's sister asks a favour from him, if he can get Yuki to spend more time with his family, they will give his band more commercial access. Yuki finds out and asks Shindou why he did it, but Shindou demands that he didn't do it for the commercial access, he wanted to know more about Yuki, will Yuki accept it or will he suspect? 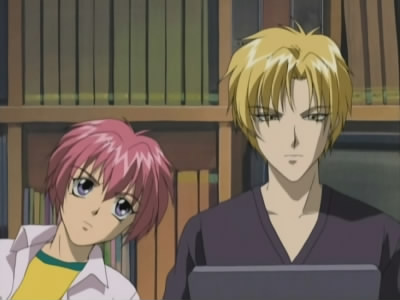 After the performance they had given last night, Mr. Touma decided that there should be another member added to the Band because he felt that there was something strongly lacking in their performance. And Sakano was fired as the Band's manager, but later in the episode he is told that he can become the bands producer. Shuichi can't understand why they aren't good enough and can't accept another member in the band which he and Hiro have been members of for a while, He believes that a new member would mess up what they already have. Hiro and him get in a fight when Hiro believes that a new member would improve them and Shuichi runs away into the park. Ryuichi and K ("Nittle Grasper's" previous manager, he now currently the manager of Ryuichi) find him crying and try to calm him down. Shuichi goes to see Hiro but confronts a little boy on the way that claims to be the new member in Bad Luck. That night Shuichi tells Yuki all his problems and Yuki tells him he's being very foolish and childish and tells him to leave. The next day he finds out that Fujisaki Suguru, the new member in the band ends up being very talented. Shuichi suddenly lost confidence in him, and even worse! The new guy is trying to change his song! This hurts Shuichi's pride and leaves him depressed... at least until Hiro goes and tells Yuki to give Shuichi some confidence. Can Shuichi accept the new member? Can Yuki convince him? Who's to know; you have to find out yourself!!! 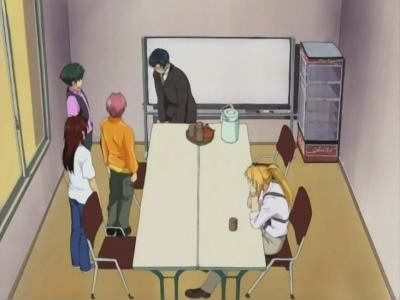 When Shuichi invites himself into Yuki's home, Yuki gets rather mad, although he does not decide to chuck him out. In the morning Shuichi goes to band practice, but cant leave because K has gotten the band a gig on Tv! It actually turns out its a game show, but they do not want the money, so they ask if they win, can they perform there song. They agree and when Shuichi answers the last question correctly (the last question was fixed by Tohma), they perform on set. Later on, Shuichi and Hiro here some fan girls talking about Yuki, and Shuichi wonders, does he deserve Yuki? 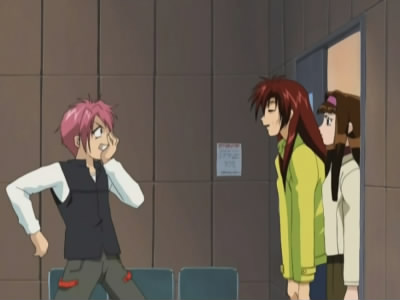 When Hiro and Shuichi are taking a walk in the park after there rehearsal, they notice that two older men and trying to have there way with a young lady, and they save her with some cocky insults etc. After wards she tells both of them shes looking for someone very important to her. Hiro offers to get her in a hotel, and Shuichi decides to leave to go to Yuki's. Although, when he gets there, he does not find Yuki, but his brother, Tatsuha. They both get along very well, because they both have a huge obsession with the Lead Vocalist from Nittle Grasper. Then Tatsuha gets a little to teasing and gets to close to Shuichi, and Yuki walks in. Later on Shuichi finds out that Ayaka is Yuki's fiancee!. It only gets worse when the Bad Luck concert is coming very soon. When at the concert Shuichi see's Yuki and Ayaka in the crowd, and cant help but scream in between the song, YUKI IS MINE! after seeing that Shuichi does have self courage after all, he tells Shuichi he will be his lover. 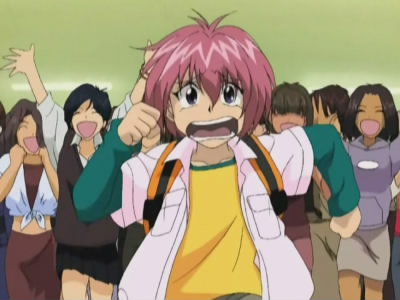 When Yuki's sister tells Shuichi that she doesn't know anything about her brother, Shuichi starts asking questions and because of it, Yuki becomes very cold and distant. On top of everything else, with Shuichi's rising fame and Yuki popularity already, rumors are spreading very fast about Shuichi and Yuki. Yuki, deciding to get away from his stress, decides to dump Shuichi. In the meantime, Tachi of ASK is up to no good again, what is he going to do? and will Yuki and Shuichi get together again? 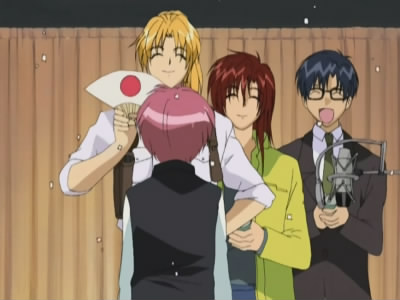 Shuichi doesnt want to do anything to hurt Yuki, and he would do anything to protect Yuki, he would even quit bad luck. Yuki resolves the Tachi situation, and he arealises something in Yuki's eye. Yuki needs to get away from Shuichi and his stress, and he knows that if he tells Shuichi to go alone, he will come back again. He decides to go away, what will Shuichi do when he hears the news?....that hes getting married. 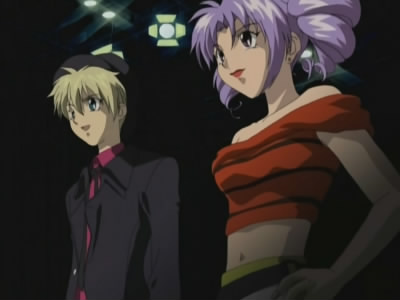 During one of Bad Luck's interviews, a member of ASK comes up to Shuichi and warns him that Tachi is up to no good, but Tohma has other plans for Tachi and his business. When ASK is out of the way, by a massive surprise to Shuichi, Nittle Grasper is back, and better than ever. Now a problem arises with Shuichi as whether he can accept Nittle Grasper as rivals, when they have been his Idols throughout his musical career. Meanwhile Yuki is having troubles, the barrier he's built around his cold heart is crumbling, and Shuichi needs to help him soon, but can he tackle this and his own problems? 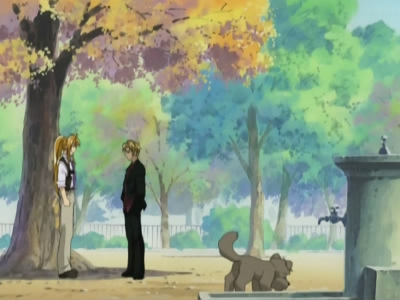 When Bad Luck's new album is too be released, Mr K decides to ask Yuki Eiri a favor. It definetely seems Mr K is eager to get a million sales, and so is Shuichi. Meanwhile, the press have finally found out that Yuki and Shuichi are living together, and they wait outside there apartment, how is Yuki going to react when he finds out, and what will he say about there relationship? 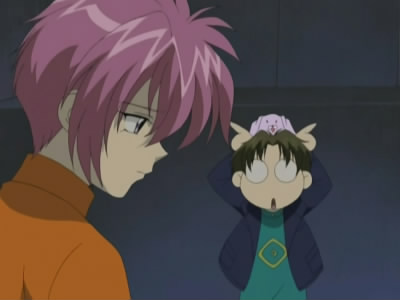 When Hiro quits the group, he says hes decision is final. No matter what Shuichi does, Hiro is not coming back. Shuichi refuses to go along without Hiro, after all, him and Hiro were the original members, and hes his best friend. Ayaka Chan gets told by Hiro that he likes him, even though Hiro thinks she will never return the feelings. And Yuki takes a surprise visit to Kyoto.

A long time ago, I started watching this show. Now, three years later, I can say that I have finished it. Unfortunately, I can't say that I was very thrilled by the output. While I have to give them credit for trying to make a good story out of this, the plot tended to drift off course at times and when it did seem like it was on track, there would be random overly comedic bits that often broke up whatever serious tone the show had. There were many scenes that could've been very heartfelt between Shuichi and Yuki, but Shuichi's personality always got in the way. I also have to point out that the ending did not resolve the romance at all, and as such was a major disappointment. Animation wise, there are moments when the show looks really good, usually during concert scenes, but there are also times where it falls flat on it's face. The movement looks very strange, especially when someone is walking or running, and it's very hard to keep track of characters when they all have the same face. The music in the series was supposed to be a main focal point, but out off all the songs including the opening, ending, all background music, and the songs the bands themselves play, the only one I could find myself liking was "Rage Beat". Just hearing that song played within an episode brightened my mood during watching. Unfortunately, that was it. Neither the opening nor ending did anything for me, and were skipped every time. In the argument of sub vs dub, I have to say sub, and even then you're gonna listen to some painful audio. The dub has got to be one of the worst dubs I've ever heard, like to 10. Maybe not top 5, but top 10. The voices feel either too forced or too flat, or make it seem like the character is younger than they actually are, the biggest problem being Ryuichi, especially in the sub. The characters in Gravitation, honestly, are the best part. While I couldn't bring myself to like Shuichi at all, as I found his hyper personality to be too much to handle, Eiri Yuki was a joy to have on screen for his sarcastic personality but also the depth of his character. When he needs to be, he can be very emotional, something I like to see from a guy who's main archetype is that he's and Ice Queen. Hiro was also fun, but he developed some issues at the end of the series that bugged me. Everyone else isn't worth mentioning, as they basically have one or two quirks and that's it. But Yuki alone is enough to make up for that. The big question is did I enjoy what I was watching, and in the case or Gravitation, I can't say I liked it enough to recommend it to anyone. It's a tough sell with a limited market. There were times I felt that I was really enjoying the series, but other times I was having to force myself through it, and it's those moments that force me to score this show low. I give Gravitation a score of 5.20 out of 10. There are some people out there that will love this show. Unfortunately I am not one of them. Give it a try only if you know you will like it.

It's upsettingly subpar. The iconic yaoi tropes all amalgamated into this one.

Start a new discussion for Gravitation anime. Please be fair to others, for the full rules do refer to the Discussion Rules page.