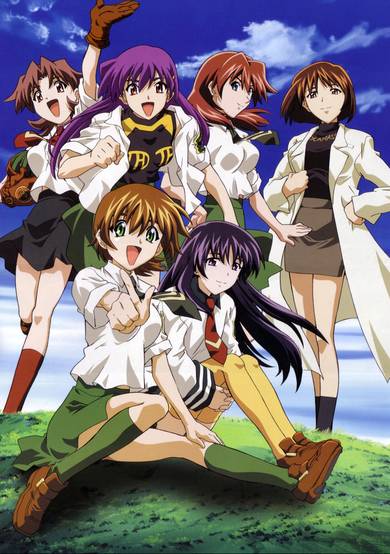 Kanenone Gakuen is an all-male boarding school located in the countryside of Japan. Although an all-male school is nothing new, life can become quite difficult when there are no female students for miles around. In order to help the psychological health of everyone involved, the school board has decided to try and merge with the nearest all-girl boarding school in order to become co-ed. The boys of Kanenone are more than thrilled at the prospect, and the girls are curious as to how interesting school life might become if there were more boys around. Before any serious decisions are made, the girls have been invited to stay at Kanenone for one month as a test.Green Green follows Yuusuke Takazaki and his naughty room mates called the Baka (Idiot) Trio, and their ability to talk to the girls without making complete fools of themselves. But as soon as the school bus with the girls arrives, things become weird, hormonal, and hysterical. In particular, a girl named Midori Chitose leaps off the bus and immediately embraces a very confused Yuusuke. Is he a natural ladies' man, or do the two of them have a shared history that he is not aware of?
User Count6952
Favorites Count9
Start Date12th Jul 2003
Next ReleaseInvalid date
Popularity Rank1614
Rating Rank10549
Age RatingR
Age Rating GuideMild Nudity
SubtypeTV
Statusfinished Excitement in the Woods!

A busload of girls from an all-girls school is on its way to Kanenone Gakuen for a month-long trial run of integrating the two schools. At Kanenone, Yuusuke leads the boys in preparing a welcoming party, with the Baka Trio acting as lookouts. Once the bus finally arrives, Midori leaps out, knocking Yuusuke unconscious in her excitement over finally meeting him, and declares that they will change their fate "this time". 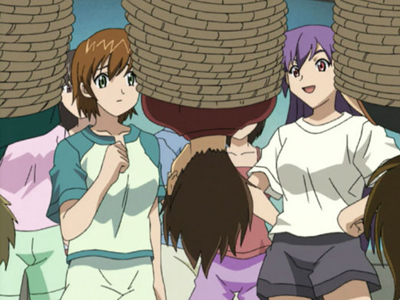 A Fall into the Bath

The girls are dismayed at the antics of the Baka Trio and the spartan facilities at Kanenone, but are cheered up when they discover the place boasts an outdoor hot spring. The Baka Trio decide to peep on the girls as they bathe, while Yuusuke takes it upon himself to stop them. 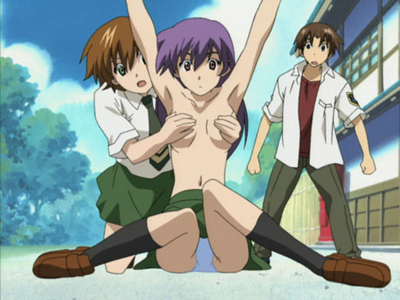 Hard Times in the Forest

Outraged over a prank pulled on her by the Baka Trio, Futaba decides to leave Kanenone for home. In her search for a short cut to the bus stop, she gets lost in the surrounding forest and injures her ankle. Yuusuke, Midori, and the Baka Trio attempt to find and bring her back to Kanenone. 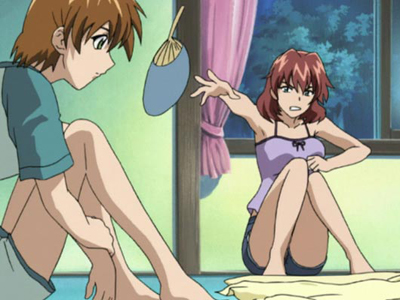 Trouble at the Girl's Dorm

Futaba realizes she is starting to develop feelings for Yuusuke. Midori notices this and confronts Yuusuke about Futaba. That evening, the Baka Trio (and a reluctant Yuusuke) attempt to break into the girls' dormitory while the girls are asleep. 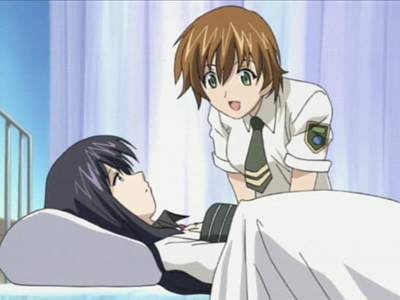 Fall Down in the Infirmary

Sanae misplaces her medicine box, but Yuusuke helps her find it. His good deed is seen and misinterpreted by Reika, who decides to try to bring the two together; and by a jealous Tazio, who enlists the help of the other members of the Baka Trio to come up with a way to win Sanae's heart. 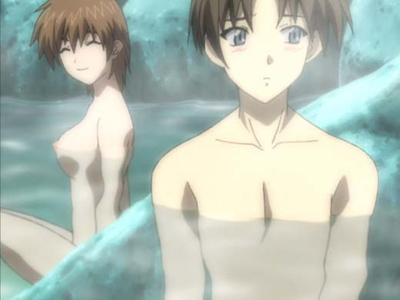 "A Steamy Time in the P.E. Equipment Room" Midori and Yuusuke are assigned to scout for locations for a school affair. Midori decides to treat the assignment as a date, and gets Reika to promise not to interfere. In order to prevent the Baka Trio from getting in the way, Reika locks them inside the PE storage room, where the heat soon causes them to have vivid hallucinations about the girls they desire. 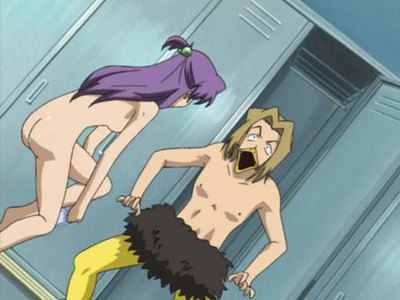 Soaking Wet by the Pool

After repeated failures to win Futaba's heart by following the dubious recommendations of a dating guidebook, Hikaru turns to Midori for help, with the rest of the Baka Trio in tow. Unfortunately, they take her suggestion to put themselves in the girls' position much too literally. 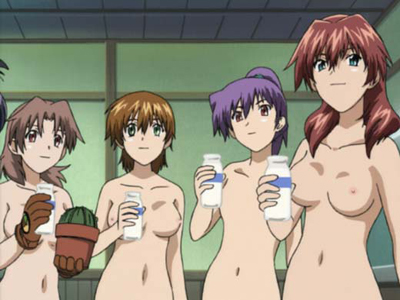 Alone in the outdoor bath, Reika delivers a surveillance report on Midori and her attempts to attract the interest of Yuusuke. Soon after "signing off", she is joined by Chigusa-sensei and the rest of the girls. They all talk about their experiences at Kanenone to date, unaware of the presence of the camouflaged Baka Trio. Hightailing It out of the Test of Courage

Chigusa-sensei organizes a late-night "test of courage", with the boys and girls pairing off. To Midori's dismay, Yuusuke draws Futaba as his partner. Reika sees this as an opportunity to bring Yuusuke and Futaba closer. Meanwhile, the Baka Trio try to take advantage of the girls they were paired with. 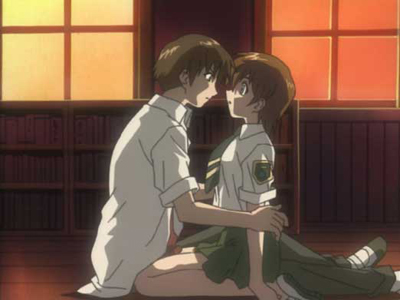 Stumbling Around in the Library

After a failed examination, Chigusa-sensei assigns Yuusuke to tutor Midori in the hope of bringing her grades up. As an incentive, she tells Midori that Yuusuke will give her a reward if her test results are above average. Wakaba mishears this, and soon a rumor that getting an above-average test result will allow you to receive a reward from the person you like goes around the entire school.

As of right now the community rating for Green green is hovering around 50%. Which is fairly accurate, 50% of the people will hate it, and the other 50% of the people will love it. Green green has the stereotypical ecchi harem story, which can turn off some viewers because it really bland. There are some parts of the story that really feel like it doesn't fit in, but I can't go into too much detail without giving away spoilers.  As far as characters go, there is the male lead, Yuusuke, and the infamous Baka-Trio. All three members in the Baka-Trio have enjoyable and interesting personalities, and the interactions involving them with Yuusuke and the other characters was kept me laughing the entire time.  If you like comedy animes with pervertness (which is pretty much comedy animes, because which one <i>doesn't </i>have some kind of fan service?) you'll love this series. Even if you don't, I'd still suggest watching the first or second episodes, it might just get you hooked.

Green Green was awkward at times and sometimes weird, but overall was enjoyable. It was a very interesting slice of life that I would like to be continued.

This anime is not on my dropped list because I did not finish it. I left this insult to modern animation in the unsavory corner of my list because there is simply no other place more shameful that I could categorize it in. It is on the same level of bad jokes that Boku no Pico is on. There is a reason this anime is not anything I would seriously recommend to anyone but the biggest media companies that produce anime. This is for the sole reason of giving them a bright example of all of the things not to do with a series. Even in the light of watching this series to laugh at how bad it is, as one would watch an old, low budget film from the 80s simply to giggle at the poor special effects, it falls pitifully short.

Start a new discussion for Green Green anime. Please be fair to others, for the full rules do refer to the Discussion Rules page.