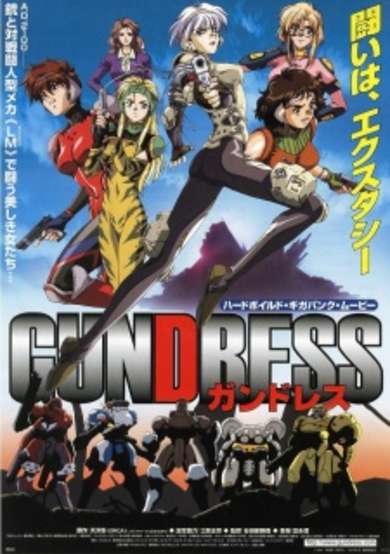 In 2100, the newly built Bayside City serves as Japan's premier international port. The Angel Arms Company is established by a former policewoman named Takako, to help wage war on terrorism with armed security suits. When the mayor is assassinated, the women of Angel Arms end up protecting the evil crime-lord Hassan, in hopes that his information will help bring down a global terror ring. Takako's back is to the wall as a band of criminals plot to kill Hassan, and the organization's leader is revealed to be the former lover of Angel Arms' own Alisa. (Source: ANN)
User Count329
Favorites Count0
Start Date20th Mar 1999
Next ReleaseInvalid date
Popularity Rank7499
Rating Rank10253
Age RatingR
Age Rating GuideMild Nudity
Subtypemovie
Statusfinished

Gundress is a very 90's mech anime, about a groups of female mech-suit pilots working for a private company called the Angel Arms, hired by the government to deal with a group of  terrorists. All the characters are very cliche and have very limited development, This may have been fixed if this were a series instead of a movie but as it is, its very disappointing. the story wasn't the most intriguing either. all and all this movie was a anime that would have been better as a show but even then it wouldn't have been anything special. If I were to recomend a anime in a similar genre to this It would Be any and all of the Ghost in The Shell series or movies. Ghost in The Shell is a much better Anime and exceeds everywhere Gundress doesn't, which is just about everything

Start a new discussion for Gundress anime. Please be fair to others, for the full rules do refer to the Discussion Rules page.