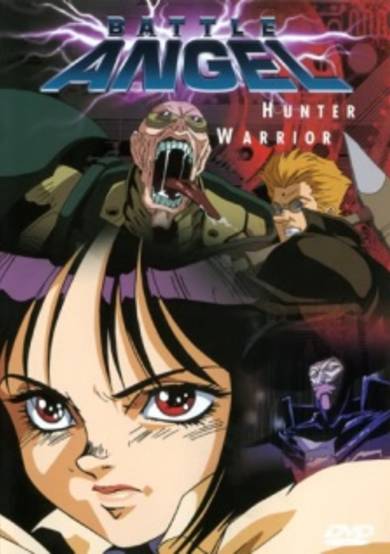 Doc Ido, a doctor and mechanic who lives and works in the hellish, postapocalyptic "Scrapyard", finds the—miraculously preserved—remains of a female cyborg in a junk heap. After he revives and rebuilds her, the preternaturally strong, amnesiac "Gally" begins to forge a life for herself in a world where every day can bring a fight for life. Adapts the first two volumes of the "Battle Angel Alita" manga.

As he scavenges the Zalem dump heap for useful parts, cyberphysician Daisuke Ido comes across the remains of a female cyborg, who is still alive. Ido takes her home and decides to restore her, transferring her into a new cyborg body. Shortly after, Gally becomes interested in Yugo, a local boy who is performing maintenance work for Ido. After Ido returns home late that night, the following day Gally notices his injured arm, which he explains away as the result of a fall. After introducing herself to Yugo, he convinces her to go with him and the two leave just as Chiren arrives. Yugo and Gally try to climb onto the roof of an abandoned factory, but they both fall. Instinctively, Gally manages to catch Yugo and land safely. On the roof, they contemplate Zalem as Yugo discusses his interest in the floating city. Gally makes her interest in him known, but Yugo's obsession with Zalem blinds him to this. Ido and Chiren go out for a drink. Chiren is obsessed with returning to Zalem, and views being in Scrap Iron City and Ido's acceptance of his lot in life as a waste. He warns her not to get involved with The Factory, and says he has no regrets about what happened in Zalem. That night, Gally is awakened by Ido going out. Curious, she decides to follow. Elsewhere in Scrap Iron City, a lone woman on her way home runs into the criminals Rasha and Grewcica. Before they can do anything to her, Ido appears and attacks Rasha with his rocket hammer, slicing off his left arm, but getting stabbed in the shoulder. Gally then arrives, killing Rasha by punching his head off. Grewcica, enraged at Rasha's death, manages to deflect one of Ido's attacks. He then fights Gally, who slices off his right arm with a kick before knocking him into the sewers. Surprised at Gally's abilities, Ido also notices her bloodlust and regret at not being able to finish Grewcica off. Ido takes Rasha's head to The Factory to collect the bounty, explaining the nature of his work as a hunter-warrior. Gally, realizing that something has awakened within her, decides to become one as well, but Ido will have none of it, so she runs off. After sealing their deal with sex, Vector tells Chiren that her part of the bargain involves upgrading the coliseum gladiators. Soon after, a damaged Grewcica arrives at Chiren's apartment, begging for help. His mention of Ido and Gally catches Chiren's attention. The next day, Ido realizes that Gally's life is hers to lead, but wonder if her desire to follow him as a hunter/warrior is a result of some residual memory. Gally returns to The Factory and registers herself as a hunter-warrior, but when she asks about Zalem, the only answer she gets is "no comment". In the meantime, Chiren starts to rebuild and upgrade Grewcica to defeat Gally. Gally returns to Ido's, where he accepts her decision to become a hunter-warrior. That night, they head out to Bar Kansas, while elsewhere in Scrap Iron City, Yugo robs a cyborg of his spinal column. Just as they arrive at Bar Kansas, Gally and Ido are confronted by a newly-rebuilt and upgraded Grewcica, who uses a cutter installed in one of his fingertips to shred a stray dog that Gally picked-up to pieces. Without help from the other hunter-warriors, Gally accepts Grewcica's challenge. Chiren then appears, wondering which of the two cyborgs will prevail. The scene shifts to the Zalem dump heap, where Gally and Grewcica's fight is watched by Ido, Chiren, and an unnamed hunter-warrior (Gime). Grewcica has an initial advantage, but Gally is able to dodge his subsequent attacks. Using her superior speed and ability to generate plasma, she first disables one, then both of Grewcica's arms before slicing him in two, killing him. Chiren hysterically acknowledges her loss, but vows vengeance. As they leave the dump heap, Gally assures Ido that she will still remain Gally no matter how much she changes.

Hmmm, a half decent action anime that consists of 2 parts. It's a bit short, but it's not too bad. The animation is ok... the face of the doctor is longer than that of a horse, but apart from that there isn't anything seriously out of place. "Battle Angel Alita" had nice background music going for it, which lent it some good atmosphere. The story had some good ideas, but is somewhat incomplete. Heh, that's the main trouble with "Battle Angel Alita" actually. It felt like a chunk was missing between the two parts that it comprises, with the relationship between the characters suddenly taking a giant leap forward going from one episode to the other. Although it's probably meant to be that way, the result is that it simply felt like they were too lazy to actually flesh out the character interactions properly and just took a short cut. The characters were somewhat interesting at first, but due to the lack of polishing, the potential went to waste and they ended up as the weakest aspect of the anime."Battle Angel Alita" felt slightly rushed in general, maybe because the anime was made to fit into 2 episodes, and the character development suffered the most because of this. I like the idea behind it, although it's definitely been done before.

I thought it was a bit over-rated, but I have heard better things about the manga and it covers the entire story rather than the 2 episode snippet we see here

I watched this when I was 7 and was my first experience with Anime. It will always have a special place in my heart

If you enjoyed the movie Elysium you should enjoy this anime. Elysium re-skinned much of the plot. That being said, it's different enough that if you have seen Elysium it will not ruin the story for you.

Start a new discussion for Gunnm anime. Please be fair to others, for the full rules do refer to the Discussion Rules page.