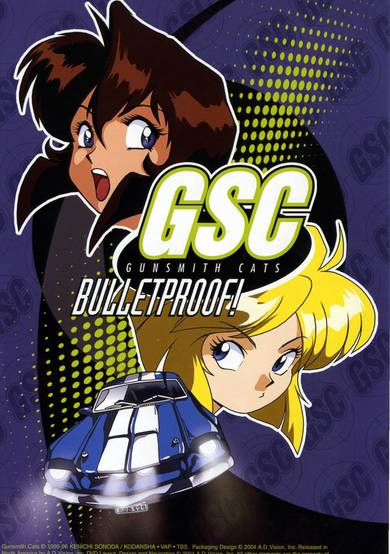 Rally Vincent knows her weapons well, while her partner Minne May Hopkins loves to play with explosives. The pair run a gun-shop illegally and one day Bill Collins of the ATF, blackmails Rally and Minnie May into working for the ATF. Little do they know, that they are getting involved in a mission larger than they could imagine. (Source: ANN)
User Count3244
Favorites Count39
Start Date1st Nov 1995
Next ReleaseInvalid date
Popularity Rank2679
Rating Rank2776
Age RatingPG
Age Rating GuideTeens 13 or older
SubtypeOVA
Statusfinished

A Russian serial killer named Natasha Rednov assassinates Jonathan Washington. While the Gunsmith Cats are investigating a gun shipment, Rednov tangles with them.

"Gunsmith Cats" is one of those anime that tries to emulate the style of those retro 70's/80's american day time TV shows. It's set in Chicago, and tells the adventures of a pair of girls who, on the surface, are just the owners of a firearm store... except they actually earn a secret living as bounty hunters. It features all the things that are common for the genre: flamboyant gunfights, high speed car chases, and even the villain, an ex-KGB Russian woman (why is it that all the Russian villains that appear in these things are ex-KGB??), is ripped straight from some Hollywood list of cliches. Everything is done well enough for the OVA to be fairly entertaining, which is the whole point of it. The story, like the anime itself, is nothing special, but is good enough to keep me vaguely interested. Compared to other stylish gunslinging action anime like "Mezzo Forte" however, "Gunsmith Cats" feels a little lacklustre. Not only that, it doesn't fully adopt the style either. And unlike anime such as "Cowboy Bebop" that manage to combine western and eastern styles perfectly, the fusion in "Gunsmith Cats" feels a bit jarring. The Gunsmith Cats themselves (as in the main characters) look like they belong in a different anime from the rest of the characters - they look so much more... kiddy-ish with their large eyed, cartoonish cuteness. The fanservice also seems kinda out of place."Gunsmith Cats" may not be the best thing since slice bread (though slice bread itself is rather overrated in my opinion), but it's pretty decent. And since it comprises just 3 episodes, it's worth checking out as you won't be wasting away too much of your life even if you don't like it. Plus, seeing Hollywood cliches in anime makes a refreshing change from just seeing anime cliches in anime.

Start a new discussion for Gunsmith Cats anime. Please be fair to others, for the full rules do refer to the Discussion Rules page.