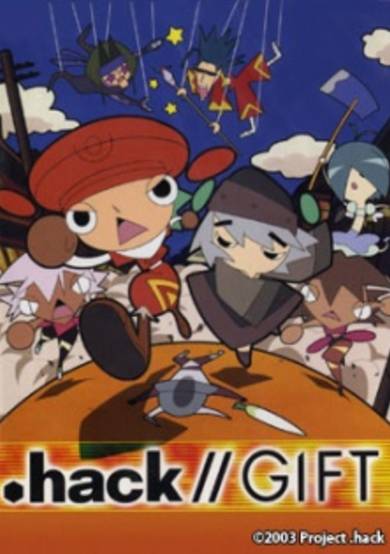 As an expression of gratitude for the heroes of both the ".hack//Sign" and the ".hack" game series, Helba has prepared a special event for all the characters to find the newly established "Twilight Hot Springs." The characters can get their well deserved rest and relaxation by having a soak in the wonderful hot springs, but there is only one problem—the hot springs are hidden and there have been mysterious player murders. With the only clue being the word “GIFT," the race has begun to find the culprit and the location of the hot springs. [Written by MAL Rewrite]
User Count1858
Favorites Count4
Start Date16th Nov 2003
Next ReleaseInvalid date
Popularity Rank3646
Rating Rank9903
Age RatingR
Age Rating GuideMild Nudity
SubtypeOVA
Statusfinished

Critic’s Log - Earthdate: September 5, 2014. Supplemental Review for .Hack//SIGN   This may be pointless of me to review an OVA that is only 1 episode, but I don’t mind reviewing stuff related to an anime that I previously reviewed. With that said, here’s .Hack//GIFT. Helba has created the Twilight Hot Springs for the heroes from the .hack game series and the heroes from the .hack//SIGN series. Now the characters race to see who finds it first, and to solve some mysterious player-killings. To be technical, this is a Bee Train production and the drastically different art style and cartoony character designs are done on purpose with .Hack//GIFT. This special OVA was made after the game and it definitely feels like a “Thank You” note to those that bought the games and/or watched the anime. The art style does feel a little odd for my taste, but at the same time… It was intentional and considering that it is not mainly connected to the main series and made as a parody to .Hack//SIGN and the games. I don’t have anything negative to say about the animation. The soundtrack by Yuki Kaijura is pretty much recycled and not even used lightly… So there’s that… One thing that is interesting to note that this OVA does not have a dub, this is because there were some jokes that would get lost in translation if dubbed and would not make sense if a Dub were to be made of it. To be honest, this anime is non-canon compared to .Hack//SIGN and I guess this isn’t much of a problem. The characters are fine… but everything to do with character development is not necessarily to talk about because of the nature of its OVA The same applies for anything to do with plot. In the end, you aren’t really missing much if you give this OVA a pass, Unless you want to see a little nudity. In other words, take it or leave it. .Hack//GIFT was available by Bandai Entertainment and it is currently out of print since Bandai went under. Even though .Hack//SIGN was picked up by Funimation, there’s a good chance this OVA may come with it, but who knows… Since this is only 1 OVA and this was only 26 minutes long, I don’t have much to offer on this one but with everything said and done, .Hack//GIFT is a nice breath of fresh air compared to .Hack//SIGN. Because of its end result, all I can say is just take it or leave it. I give .Hack//GIFT a 5.2 out of 10, it is AVERAGE! Feel free to leave a comment.

Start a new discussion for .hack//Gift anime. Please be fair to others, for the full rules do refer to the Discussion Rules page.