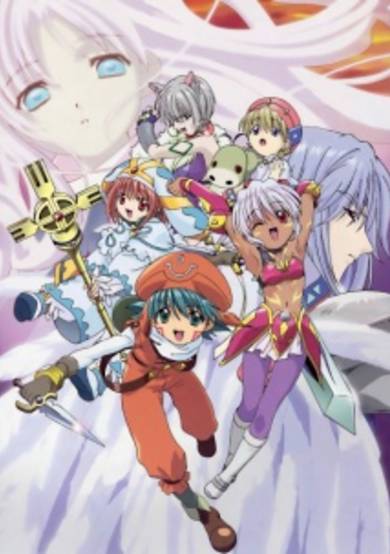 Winning the legendary characters "Kite" and "Black Rose" from an event held by the creators of the MMORPG "The World," Shugo and his twin sister Rena steps into "The World." Together they completed events and quests, along with their new friends Ouka, Mirelle, Hotaru, and Sanjuro. Soon after, mysterious monsters appeared, and death by these monsters caused players to slip into a coma in the real world. Only Shugo and Rena can solve this problem, but why are they being targeted, and what secrets is the game hiding? [Written by MAL Rewrite] 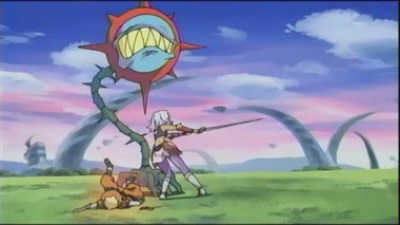 A boy named Kunisaki Shugo checks his email to find that he has won a contest that allows him to play The World as the legendary .hacker Kite. Shugo calls up his twin sister to tell her the good news and she informs him that she too has won the contest and that her character will be remodeled after the character Blackrose (also a legendary .hacker). Shugo mentions that he never entered in any contest and that he does not even have the software to play the game. That is when Rena informs Shugo that she entered him in the contest and that just incase one of them won, she installed the world on his computer.When he logs in, he meets up with his twin sister Rena and they decide to go to a field. On the field, Rena and Shugo watch as a Level 1 class monster appears in front of them. Shugo attacks, but is easily knocked to the ground by the monster. Rena performs Calamity Cut to take out the monster and then she offers her brother a healing potion. After being reprimanded by Rena, Sh 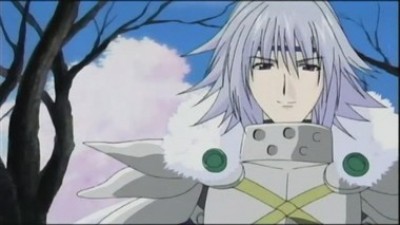 Shu-go and Rena encounter Mireille, a Wavemaster intent on collecting rare items. At her invitation, the two participate in an event that has them figShugo logs in, and Rena immediately scolds him for being late. During this scolding, Mireille shows up ready to join the party and go out on an adventure. Instead of politely turning Mireille down, Rena grabs Shugo's hand and uses a Speed Charm and makes a run for it.When Rena and Shugo stop, they realize that there was a special event going on today involving trying to make the Cherry Blossoms bloom. Shugo is really interested in getting over to the field and winning a rare item, but Rena suggests that the field might be tough and they could use a wavemaster. Luckily Mireille just happens to be around and ready to lend a helping hand. At the field, Mireille does her best to try to get the trees to bloom, by casting healing spells. Realizing that doesn't work she wanders off thinking that a rare item might help. Shugo takes this t 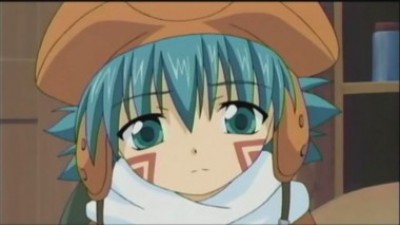 Late one night in the world, a reddish-brown haired girl asks another girl named Hotaru for a favor. She is going to be logged off for 3 days, and was hoping Hotaru would watch her Grunty. Although Hotaru knows nothing about raising Grunty's, she accepts.The next day, Shugo learns that since his bracelet is such a high level, his level must be higher in order to use it properly. Rena, Mireille, and Ouka convince Shugo that they should go train in an intermediate level area. This will help him level up faster and hopefully be able to control the powers of the bracelet. Balmung and Reki get together to talk about the Kite and Blackrose contest. CC Corp claims that they did not authorize the contest and that they know nothing about it. Balmung thinks that either they truly know nothing about it, or that they are refusing to talk. Balmung tells Reki to report is as a number one emergency claim. Hopefully then someone will decide to talk.On the field, Ouka, Mireille, and Rena te 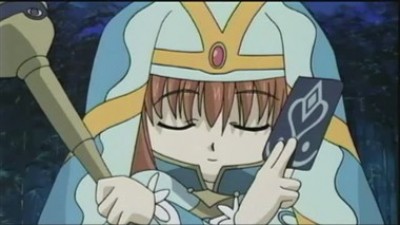 The episode starts with Sanjuro training Shugo about how to fight the monsters in ""The World"" When they are done, they teleport back to the city where Rena is waiting for them, and she tells Shugo the he has spent a lot of time playing with Sanjuro lately. Shugo replies that they were not playing they were training. Sanjuro chimes in and says that a warrior needs to train. Rena replies that Shugo is not a warrior and that she is feeling neglected that they should spend more time together.In Mac Anu, the Shugo and Rena learn about the Festival of the Weaver Maiden that will be held later that day. In the field Distant Azure River, where the festival of Tanabata is scheduled to take place, Shugo is already there waiting for the others to arrive. When Mireille shows up, she is wearing a rare yukata that she received as a rare item from a very tough battle. Shortly after, Hotaru, Ouka and Rena teleport in and they, too, are wearing yukatas. According to Tanabata tradition, everyone 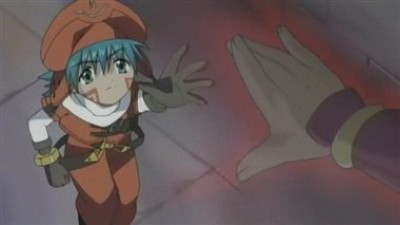 Four kids are sitting around computers discussing how their modified monster just lost. They realized that their opponent used data drain and the only person to obtain such a power is Kite and that he must be eliminated.Shugo and the girls decide to head to the beach. Rena and Shugo see a couple of boys trying to take a rare ball from a little girl on the beach. So, they head over to the girl and get her ball back from them. When Shugo gives her back the ball, the girl takes his Member's Address and then quickly teleports away.In the real world, Shugo finds out that he has an email from Aura asking him to help her. Most of the text is fragmented and difficult to read so Shugo asks Mireille to decipher the information. She tells Shugo that Aura wanted him to go to Haunted Woodland Muderhouse. When Shugo and the others arrive at the mansion Rena gets scared and determines to show them how brave she is so decides to go off on her own. While the groups is searching for Rena, th 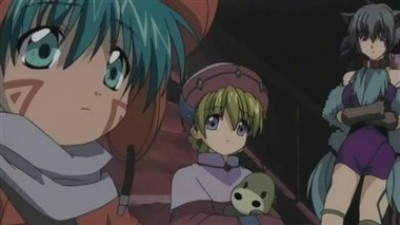 Trap of the Hot Steaming Water

Rena goes missing during the battle with the monsters, so Shu-go and the others look for her. Just then an anonymous e-mail arrives, its sole contents being a certain Area of the game. Shu-go and the others think that perhaps Rena's disappearance is simply an ""event"" bulit into the game. They head to the Area named in the e-mail to check it out. 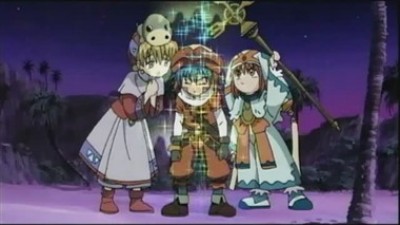 Shu-go and the others sweep the Area looking for Rena but come away empty-handed. Balmung and Sanjuro therorize that Rena's disappearance may be a result of someone wanting to get their hands on Kite's bracelet, an item Shu-go currently possesses. The two of them at last Shu-go in on the secret details of their past. 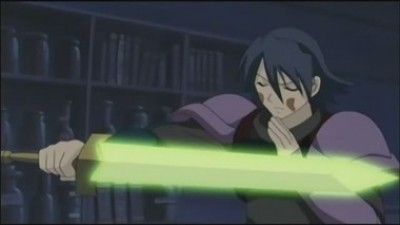 Shu-go decides to make use of the illegal ""Data Drain"" skill in order to locate Rena. CC Corperation , the company that oversees the online gaming envoirment of ""The World,"" also has sentries that patrol the game, locating characters whose conduct is against the rules. It's not long before the sentries get word of Shu-go's Data Drains... 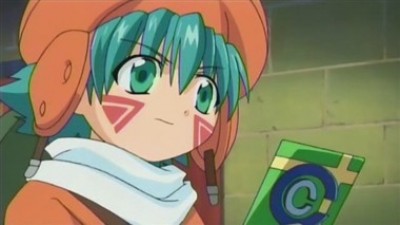 Shu-go and the others finally uncover a clue to Rena's whereabouts. Unfortunately, that place appears to be on a server that's not open to the average player. Shu-go tries to enter the server via ""Data Hacking"" another power of the bracelet he possesses. 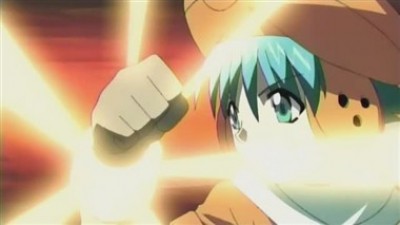 Shu-go and the others -well aware of the danger but determined to help Rena arrive at a sever that's not yet open to the average player. When they enter the sever(which connects to the Area where Rena is located), they encounter a monster that by all rights shoudn't appear in that Area. What's more, the monster's data has been altered to the point where Shu-go and the others' have no effect on it. They find themselves on the defensive. Meanwhile, Rena wanders around alone, looking for a way out of the Area she has been imprisoned in. In her wanderings, she encounters a mysterious individual who emits a faint light.

Start a new discussion for .hack//Tasogare no Udewa Densetsu anime. Please be fair to others, for the full rules do refer to the Discussion Rules page.