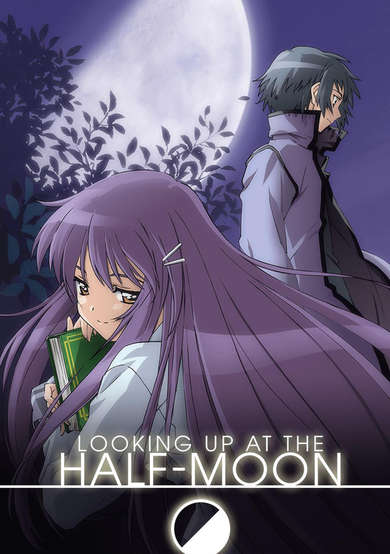 After contracting hepatitis A, Ezaki Yuuichi has been confined to a hospital, away from his friends and family, much to his displeasure. To relieve his boredom, he has taken to sneaking out of the hospital, usually putting himself on the receiving end of a beating from his nurse. Upon meeting a girl his age also staying in the hospital, he is immediately captivated by her beauty. Akiba Rika's personality is not quite as captivating as her beauty however. In fact, she is rather selfish, moody, and bossy. But as the two spend more time with each other, they become closer, sharing the ordinary joys and trials of a budding teenage romance, even when darkened with impending tragedy—for Rika's condition does not leave her much longer to live. [Written by MAL Rewrite]
User Count7656
Favorites Count29
Start Date13th Jan 2006
Next ReleaseInvalid date
Popularity Rank1489
Rating Rank3037
Age RatingPG
Age Rating GuideTeens 13 or older
SubtypeTV
Statusfinished Akiko, the Girl, and Ryunosuke Akutagawa

Yūichi constantly sneaks out at night, and to cut his habit, his nurse Akiko barricades his door to prevent him from leaving. However, she strikes a deal that if he is able to become friends with a new patient, she will lift her restriction. The new patient turns out to be Rika, a seventeen-year-old girl in the eastern ward who enjoys reading the works of Ryūnosuke Akutagawa. At first, Yūichi, with the assistance of Akiko, lies about reading the same book, but Rika easily sees through this act and demands that in exchange for her forgiveness, he must do what she wants. One day, Rika requests to go up to Mount Hōdai despite her weak, sickly condition because it was the same place her father hiked up before he died, and she believed if she is able to do the same, she will lose her fear of dying. Yūichi sneaks her out of the hospital with much success and realizes that he is doing favors not because she tells him to, and when he tries to tell her his true intent of assisting her, he faints. 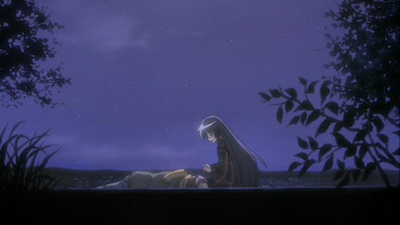 Inheritance of the Tada Collection

Earlier, Tada had died and left Yūichi all of his pornographic magazines in his will. Rika discovers this secret and becomes furious. Although Yūichi becomes remorseful and searches for opportunities to apologize to her, Rika only responds with pranks and resentful actions. After Rika locks Yūichi on the hospital roof, he falls ill and becomes a patient of Dr. Natsume, who had recently returned from a vacation. When Yūichi recovers, Akiko creates an opportunity for him to apologize. However, while waiting, he encounters Dr. Natsume and learns that he had been treating Rika for six years and only transferred to the hospital to keep watch of her. Dr. Natsume is surprised that Rika had told Yūichi about her illness since she had never done so in the past, nor had she ever made a friend. He gives Yūichi a pornographic magazine, and Rika catches him perusing through the magazine and again locks him outside; meanwhile, Akiko realizes that Dr. Natsume had purposely caused this because he found it "entertaining". Eventually, Rika and Yūichi get back on friendlier terms, but Yūichi becomes offended when Rika states that the only reason she wanted to apologize was because of Dr. Natsume's influence. In response, he harshly expresses his contempt of the doctor, and Rika throws her book at him. The book turns out to be both her father's and her prized possession, and lands on the top of a window. 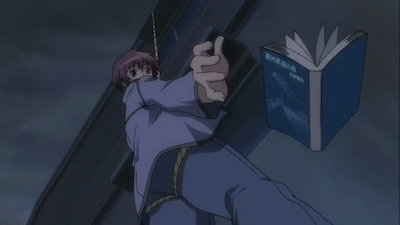 With the help of his friend Tsukasa, Yūichi is able to rescue the book from the rain, but consequently develops a fever. He dreams that he and Rika reconcile — which turns out to be real, as Rika visits his room in his feverish state. When Yūichi recovers from his illness, Dr. Natsume sees him burning all of the pornography Tada had left him. Yūichi explains that Rika will only forgive him if he burns the "Tada Collection", and Dr. Natsume becomes quite surprised of how the two are getting along so well. The next time Yūichi visits Rika, she lends him Night of the Galactic Railroad; meanwhile, Dr. Natsume shares a recent discovery to Rika's mother that Rika's condition is growing worse. When night falls, Yūichi finds a drunk Dr. Natsume who tells him that his friendship with Rika will not last. Yūichi accuses Dr. Natsume of jealousy, but Dr. Natsume only assaults him physically. Later, Yūichi reads Night of the Galactic Railroad again and reads about Campanella, Rika's "character", dying. Through this, he discovers why Dr. Natsume was angry and mourns over the destiny that would await Rika. 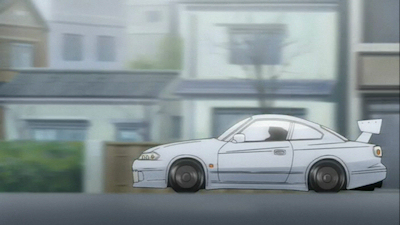 Only One Day of School Life

Since Rika expresses her desire to have her photos taken, Yūichi and Akiko return to Yūichi's house to find a camera. As Yūichi is taking photos of Rika, she asks him about school. Rika expresses envy that Yūichi is able to go to school while she has never been to one in her life. Yūichi receives an idea that just for one day, the two could pretend Rika is going to school. With the help of Yūichi's friends, Rika borrows a schoolgirl's uniform and enters school grounds; however, a teacher catches them. Rika realizes that Yūichi may end up in trouble, but the boys have already knocked the teacher unconscious. In a classroom, Rika tells Miyuki that she is not afraid of dying, but makes her keep it a secret from Yūichi. Upon their return to the hospital, Rika and Yūichi get into trouble and are punished. While sitting out their punishment together, Rika gives Yūichi a book titled Les Thibault and orders him not to read it until she tells him to. When Yūichi speaks plans of observing the flowers blooming, Rika suddenly falls unconscious. 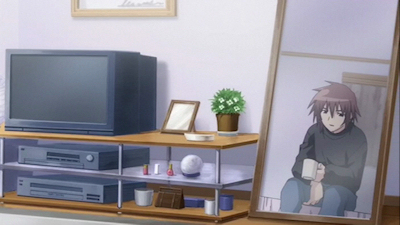 Rika is admitted into the intensive care unit, and Yūichi is only able to see her for one minute in secret. Dazed and depressed, Yūichi encounters Akiko's friend, Misako, who immediately seduces him. Fortunately, Akiko quickly figures out her doings and angrily beats up Yūichi and punches Misako. She notifies him that he must never tell Rika about this event or else Rika's condition will falter more. The next day, Dr. Natsume comforts Yūichi on the hospital roof, understanding his situation seeing as he was put into a similar one when his wife was dying of cardiomyopathy. Dr. Natsume is practicing for the operation and tells Yūichi that out of all the years he had known Rika, this was the first time Rika had been earnest about receiving the operation. Before Rika's operation, she tells him that Yūichi is able to read Les Thibault. While patiently waiting for her operation to be over, Akiko tells Yūichi that the reason why Rika brought up the idea of photos was because Akiko had showed her a photo of Yūichi. Rika had it taped to her leg as a luck charm. Eventually, Yūichi reads Les Thibault, and ultimately discovers a parallel from the ending of the book—it is Rika's confession of love to him. She says that she would risk her life through operation for a chance to be with him. 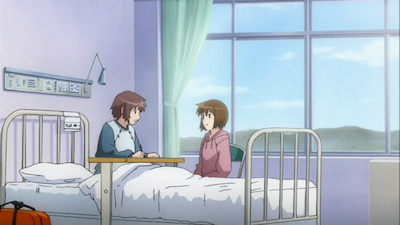 Rika's surgery is over and she is well enough to return back to the eastern ward. However, Yūichi is forbidden to see her again. Dr. Natsume reminds Yūichi that while he has a future, Rika may not, and soon Yūichi may have to choose between his dreams and Rika. Later, Dr. Natsume tells Yūichi that he can do anything he wants, helping Rika included, but confides to Akiko that he had blinded Yūichi with this optimism. He shares the fate of his wife's life and mentions that he was once pitted in a situation in which he had to choose between her or his work, and he does not want Yūichi to suffer under the same circumstances. Secretly, Yūichi overhears their conversation and decides that no matter what, he will stay by Rika. With the help of his friends, he enters Rika's room despite warnings in order to promise her that he will always be with her. At the same time, Akiko asks Dr. Natsume if his happiness is more important than that of his loved one. She goes on to say that, "Rika smiles and laughs now. It is better for Rika to be happy with Yūichi than for her to go back to the way she was before she met him." After the credits, a photograph is shown of Rika and Yūichi during their wedding, implying that some time later they got married.

A short romance/drama OVA series, "Hanbun no Tsuki ga Noboru Sora" is an anime has its moments, but is guilty of trying too hard to create drama. It's supposed to be set in a hospital, but patients are allowed to wander around at their leisure... or even go off on the occasional mountain climbing trip if they feel like it. If they're well enough to do that, why the hell are they taking up space in the hospital? Not only that, everyone seem to be able to do whatever they want without any consequences. Locking ill patient outside in the cold? No problem! Abusive Doctors? That's okay too. It takes a hell of a lot just to get anyone to raise an eyebrow in this "loving and caring" hospital.Other inexplicable elements include the random actions of the nurse's friend, who seem to have a touch of madness in her, and the random appearance of this Zebra mask character... but, if you can manage to sweep all these unrealistic elements into a dusty corner of your mind and ignore it, the rest of the drama elements aren't too bad, as there are some rather touching moments. Despite the show's tendency to resort to the usage of cheap plot devices in order to conjure up melodrama, it's during the quiet periods of melancholy when not much is happening that the anime is at its best. Thinking back on it, I think I actually enjoyed "Hanbun no Tsuki ga Noboru Sora" more than I should, considering all the contrived plot "twists", but what can I say, I guess I'm just a sucker for those melancholic moments.

Start a new discussion for Hanbun no Tsuki ga Noboru Sora anime. Please be fair to others, for the full rules do refer to the Discussion Rules page.