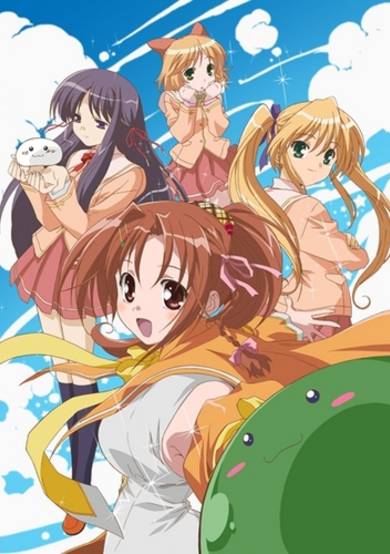 Kamizaka Haruhi having been rescued when she was young by a mage, longed to be a mage herself, so she enrolled into a special school that allows regular and magic classes into two different sections. Together with her rival/best friend, Hiiragi Anri, they study magic together while she is searching for the boy that saved her years ago, to give him a Valentines' chocolate. (Source: ANN)
User Count2753
Favorites Count6
Start Date6th Oct 2006
Next ReleaseInvalid date
Popularity Rank2948
Rating Rank9008
Age RatingPG
Age Rating GuideTeens 13 or older
SubtypeTV
Statusfinished

Danny Spencer is the voiceover actor for a children's TV program character, Dexter, a kung-fu nurse bear. Danny tries to face up to a personal tragedy after the death of his wife. Instead of grief, however, he is ashamed to find himself feeling a sense of freedom.

Danny tries to halt the ageing process by spending time at the pub, while his ego takes a dent when Dawn French makes a guest appearance on Dexter's show.

Danny cannot escape sex; he's not actually having any, but it's everywhere. Terry &amp; Rachel, meanwhile, visit the hospital for her ultrasound scan.

Danny has a dream involving Charlie Higson. Pitying Danny's plight, Bob Geldof sets him up on a blind date.

Dexter the Bear gets nominated for a BAFTA, but Danny has a prior engagement.

With his 40th birthday looming, Danny gives his first-ever interview to the press, but his nerves cause him to drink too much and become somewhat indiscreet.

While everyone was having their bento box's at the arcade, they decide to listen to Koyuki and head off to the bowling alley.

Haruhi and Yuma have become close since their training over summer vacation. Minagi Sensei asks Haruhi to do a favor.

Ibuki treasures the closeness that has been reached with Haruhi. When the reason is revealed, Yuma tries to prevent things from escalating but her magic goes faulty and leaves Sumomo unconscious.

\[Old review is old.\] I first saw Happiness back when I was still finding out what anime was all about, and my main source of interest while watching it was an intrigue to discover anime’s identity. Apparently that was enough to carry the show for me and I was able to see it all the way through. A few more shows later, I saw it as one of the weakest series I completed. A few others have surpassed it by now, but it’s still my choice for one of those shows at the very bottom of the anime barrel. As far as the story goes, one day a little girl is saved from a bully situation by a little boy who uses magic. This is enough to inspire her to learn magic to make others happy, and she grows up to be an eccentric teenager with supernatural powers named Haruhi. If only the image that just popped into your mind were the case. Now she goes to magic school and meets a bunch of colorful friends, and in time she may even be reunited with the magical boy of her past. Haruhi proves to be a generic likable protagonist, only eccentric in small amounts when she isn’t calm and collected, which proves to be refreshing once I get around to the other characters. Unfortunately, she’s also not very interesting, entertaining to watch, and consequently forgettable. The other guys reach some pretty annoying levels. Magical boy is excessively bland with a phoned-in backstory that leaves no impact. Pigtails girl has the quirk where she’s pretty shit at magic, and it’s made worse when they give her an attitude. The boy’s sidekick is horny…and that’s it. They also do this thing where they obviously design the character as a girl but then say that she’s a trans girl for no reason other than to skip personality creation because I guess that’s all you need for a side character. Everyone else on the show was forgettable and too uninteresting to like. Actually, I only mentioned in the synopsis that they were colorful to show how more care went into how their crazy anime hairstyles looked compared to their actual characterization. But even their designs are bad. We’ve all seen this rainbow of jagged, excessive hairstyles before. Let’s take a closer look at the aspect of art design in this show. Tell me we haven’t seen this same type of magic in past shows, tell me we haven’t had better renditions of the magical sidekick blob (It’s just a circle, you couldn’t get anymore creative than that?), and tell me that these beaten to death character style don’t cement this show as a hackneyed snooze fest. One of the little episodic gags is that someone screwed up everyone’s lunches with magic so their food becomes a bunch of creatures. This might be a fun way to show off design elsewhere, but the creatures they come up with end up being ridiculously simple. Nobody is harnessing an idea or some passion to show unique imagery, they just put in some animal doodles and done. The reaction from the students is just as sad as a hundred copies of the same design and animation charge past the camera in panic. Constant corner-cutting only proves how much of a filler show this was for the studio, which was Artland. I guess after Mushi-shi you can only go downhill. Even when I first saw Happiness I knew it was on a much lower level than what I had watched before. Though it was made for a younger audience, that doesn’t excuse a lack of effort on all levels. A few twists in the plot and a nice ending was welcome, but I was never drawn into the writing to care about the characters or what could happen to them. We have seen everything in this show done better somewhere else. These stupid gags, these annoying characters, this boring setting, it’s all been done better elsewhere. Happiness doesn’t do anything new or original, it’s just a small show for the studio to make a quick buck without having to worry about quality control. <u>Happiness! (2006)</u>\: 2.4/10

Start a new discussion for Happiness! anime. Please be fair to others, for the full rules do refer to the Discussion Rules page.