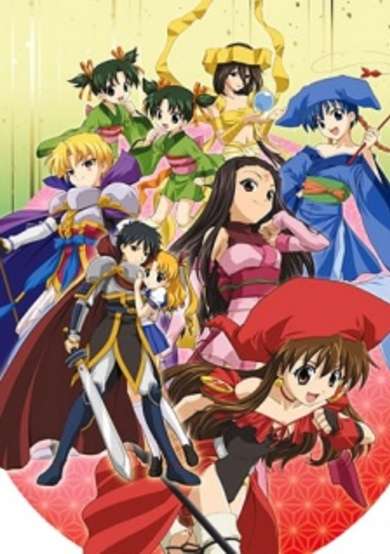 Amano Sakogami is a girl who has an unnatural amount of bad luck. One day, she stumbles into the clubroom of the Better Fortune Research Organization, which consists of a boy and seven other girls who secretly use the power of the luck deities to fight against the Magatsugami, monsters who can affect a person's luck &amp; well-being. Amano soon becomes the club's manager, and joins the club in their fight against the Magatsugami and their controller, Kukitomoe. (Source: ANN)

Happy Seven is one of those one magical girl that actually bored me into paying no attention to it halfway through. IT'S SO BORING! It's like taking Pretear saying, "here. We're trying to compete with you!" Instead of turning the Seven Dwarfs into guys, they are turned into magical girls and one magical boy. The only thing I liked at all were the transformations which I watched when I was into only watching transformation sequences. This magical girl is a waste! Don't even bother with it.  Story. It's about a girl named Amano. She's got an unusual amount of bad luck. Her bad luck causes these monsters to appear that threaten good luck. Until she meets the Happy Seven who oppose these creatures. These girls are in a club, and soon after, the girl becomes the manager. First of all, the story is boring. I don't like it, and even though it's an older show, I still fail to see what's so great about it. The characters are annoying, and there's far too many of them for me to care. I didn't even remember the name of the main character--I had to look it up! Also, "Happy Seven" sounds so weird. I don't like that name, eeew. The animation and art are too old for me. The animation is nothing at all special, and of course it wouldn't be; this was a 2005 anime. It's not even good enough except those transformations. Not everything can be Pretty Cure or Sailor Moon, anyway. I hate the theme song and the background music in this show with a burning passion. The characters? All forgettable. Too many to care about, and too many and I just don't care about any of them. They're all so BORING, and this show makes them even MORE boring, just DEAR GOD. Enjoyment? Barely any. This magical girl is boring! Skip it.

Start a new discussion for Happy Seven: The TV Manga anime. Please be fair to others, for the full rules do refer to the Discussion Rules page.