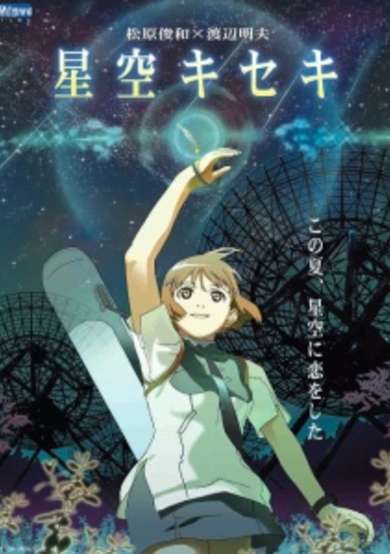 Kozue is a girl who loves astronomy, particularly the stars. One night, on an excursion to witness a meteorite, she meets Ginga, a boy who is able to help scientists discover more information about the stars through a mysterious ability of his. However, he is forced to stay in a protective suit in order to carry out his mission. Because of this, Kozue decides to convince Ginga to make his own decisions &amp; to take off the suit using his own will. (Source: ANN)

"Hoshizora Kiseki" is kind of a strange show. It seems to be more about astronomy, but it's really a strange love story between a boy and a girl, who hit it off in an awkward and simple way, it kind of doesn't work to me, but you can roll with it. The story is fairly simple, but it's also kind of strange, because they never really explain what is the point of the boy's mission other than "It's something I have to do." I know this series was 30 minutes, but it felt like a strange addition to the show. The art reminds me of a mix of Cossette no Shouzou, and Serial Experiments Lain. I don't really like that dark tone of artwork personally. For an ONA though, this looks very good. The music has an extreme MIDI sound to it, but in that vibe of a Visual Novel, so it hasn't entirely lost its charm. The seiyuu do well enough, but sometimes they seem a bit monotonous. There are really only 2 main characters, and 3 supporting characters. Main: Kozue and (We learn while watching) Genga Supporting: Kozue's friend Kozue's Brother or Friend Mystery man in a suit They don't have too much build to them other than some of the basic things, Kozue's friend likes her "Brother? Friend?" Mystery man is the mediator to the plot point of the space fragments. Kozue is a strange person in my opinion, she seems to get happy and angry at the drop of a hat (Mainly at the beginning), and likes to annoy the people around her without trying to understand what's going on. But, she is around 14-16, so it's understandable. Ginga is basically an experiment and has to remain in a suit because the outside world will diminish his power, whatever that is. The ending has some development on Genga, so I will not spoil it. I thought this show was okay. I didn't like it too much, especially the dark art style. But I didn't hate it, and I didn't feel like I wasted my time after I watched it. It's a strange love story, not very much astrology is involved, but it may be a nice short if you have an inkling to watch one. But a much better short would be "Voices of a Distant Star" if you haven't already seen that.

Start a new discussion for Hoshizora Kiseki anime. Please be fair to others, for the full rules do refer to the Discussion Rules page.