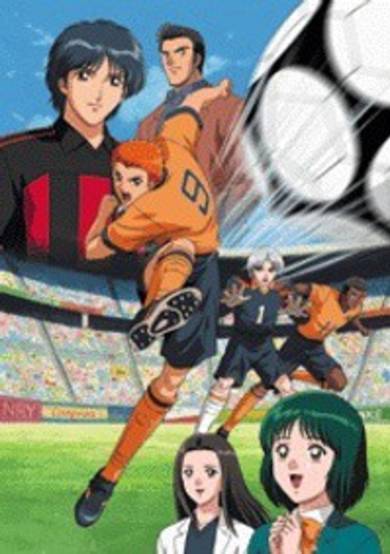 Kyosuke Kano has lived under the shadow of his successful brother Seisuke all his life who is a professional soccer player. Tired of being compared and downgraded at, he abandoned playing soccer until a boy from his new highschool discovered him and asked him to join their team. Kyosuke joins it and befriends two other first year players named Rodrigo and Sakai with the dream of becomming professional soccer players themselves. (Source: ANN)
User Count1763
Favorites Count16
Start Date11th Sep 2002
Next ReleaseInvalid date
Popularity Rank3733
Rating Rank2253
Age RatingPG
Age Rating GuideTeens 13 or older
SubtypeTV
Statusfinished

Kyosuke Kanou is a 16 years old boy, and he is on the first year of Highschool in Jyojo Akanegaoka. When he is in the street with his friends, he fights a couple of thieves and when they are running away, they push a little kid lover of soccer. This incident makes Kyosuke to show his skills at soccer shooting the ball that the kid dropped. This incident was watched by Mori and Miki, two persons that goes to the same highschool of Kyosuke. The next day, Kyosuke is asked by Miki to be the coach of Akanegaoka' female soccer team for a week, and Kyosuke accepted. Now, Kyosuke has to face the soccer one more time.

Kyosuke is now the coach of the female soccer team of Akanegaoka. As a first training, he puts the girls to grab all the rocks and herbs of the field from the first line of goal to the other one. With this task, the girls of the team, eventually leaves the team and only Miki stays until the end. With this task and a thanks from Miki, Kyosuke realizes that he still loves soccer and with the help of Mori, he decides to play again soccer and he decides to join the male soccer team of Akanegaoka.

Kyosuke finally joins Akanegaoka' s soccer team where he meet Rodrigo and Sakai, and to prove his skills he challenges Kamata and Sako, the captains of the team to a friendly game but a one price, the loser has to run 100 laps around the field. Will Kyosuke wins the bet? or is he going to run 100 laps?

Akanegaoka is going to play a friendly game with Kokuryou highschool, the number 1 team in the region. Rodrigo and Sakai has been chosen to play as main players in the team, but Kyosuke is chosen as defender instead of forward. Can Kyosuke play as a defense?

Kyosuke doens' t play very well as a defense this cause that Akanegaoka loses the game againts Kokuryou 3-1. Kyosuke doens' t like his position because he is a forward, he ignores the true intentions of the coach and he leaves the team.

Now that Kyosuke quits soccer again, he went with his friends again in the streets. He doens' t want to accept that he is running away from his brother and from the soccer. Meanwhile, Akanegaoka' female team is playing the first game in the interhigh tournament and they are playing against Himenokawa, a tough team. When Kyosuke watch the game, he decides to cheer them up in the game, but they lose the game 9-0. After that, Kyosuke decides to keep his promise to Miki and he decides to return to Akanegaoka.

Rodrigo' game style has Ichikawa upset and they have a fight between them. After that Murakami challenges Rodrigo to play with Kamata and beat his defense.

Sakai realized that he has a weakpoint, during a practice of shoots with Murakami the coach. Then, later that night he practices with Rodrigo and Kyosuke and then, he remembers the reasons of his weakpoint, an accident when he was a child. The next day, Sakai has to prove Murakami that he is the best goalkeeper and that he is not gonna give up his position.

The interhigh tournament has finally begins and the first game of the 1st round is Akanegaoka Vs Johoku. Kyosuke has been chosen to play as forward, but during the game, Kyosuke is not playing well ans he is not in coordination with the other forward, Shimizu. This mistake causes that the other team scores tree goals. Then during the break, Kyosuke is chosen as the only forward in the game and he has to prove that he is not a coward. Can Kyosuke prove that he is worth to be a forward?

Kyosuke has read the minds of his opponents and he scores two goals in the game. This is the result of playing as a defense, in that way he could see the plays of the defense. But the other team is not gonna allow Kyosuke to keep scoring, so Kyosuke has to find a way to score and win the game.

Start a new discussion for Hungry Heart: Wild Striker anime. Please be fair to others, for the full rules do refer to the Discussion Rules page.