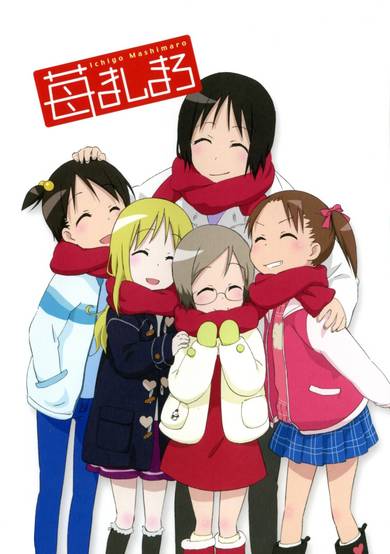 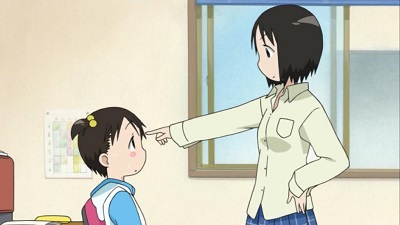 Chika, Miu and Matsuri notice that it's Nobue's birthday and plan to make her a gift by themselves. After moving to Japan from England, Ana starts at the same class as Matsuri and pretends to know nothing about Japan or Japanese. 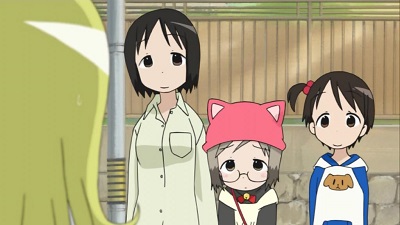 Ana invites Matsuri at her place to help her study English. But much to her grief, the entire gang decides to tag along. 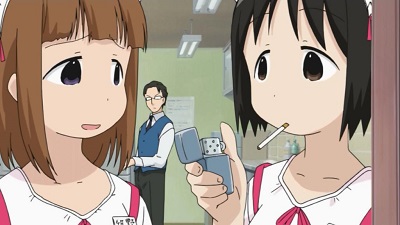 Nobue finds out she's ran out of money to buy cigarettes and tries to find a fitting part-time job. Ana, Matsuri, Chika and Miu do their best and worst to help her. Arbeit means part-time job in German. 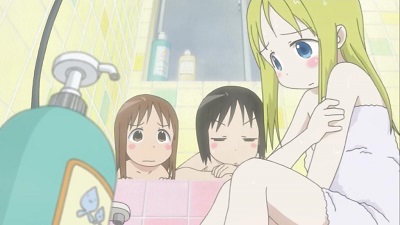 Miu becomes jealous over the attention Ana and Matsuri gain from Nobue. 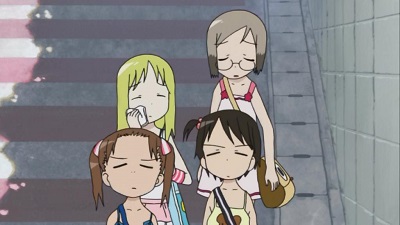 Miu is shooting a video documentary for school, and chooses the Itō household as her subject. In the end, Nobue takes the gang out for a beach trip. A festival episode has the gang dress up in yukatas and head out to see fireworks. 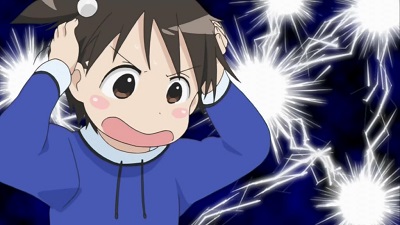 Chika discovers she's gained a bit of weight, and, provoked by Miu, starts her own diet. It's only after a pointful remark by Nobue, that Chika's self-confidence gets restored. Many sidequests disturb the girls' trip to a distant restaurant to have cake with Nobue.

Ichigo Mashimaro is a slice of life comedy, nothing more, noithing less. It is about four friends and and an older girl who is one of the fours sister, there isn't a set story apart from seeing a different activity each episode and most of the time that activity happens in Chika's bedroom.Art/AnimationI would say the art of this show fit perfectly, it's a cute show thus everything looks cute, everything is simple but it isn't a show where you would want overly detailed hair styles, clothes etc, each character has their own cute facial expressions which are amplified by their tiny mouths, the backgrounds are very softly drawn. The animation is nothing amazing but it fits the show with is simplicity and smooth movements.SoundThe opening theme song is a very catchy fun song in which is sung by the Japanese seiyuu and is likely to get stuck in anybodies head for a while, the end is the complete opposite and is a slow ballad but it is still a nice song to listen to. There isn't a lot of background music but there is a little and the sound effects of crickets and various other noises were ok.The English dub voice actors were all great and each one fitted their character, they even portrayed the lack of ability to speak English by one character.CharactersMiu is a bit of a brat throughout and on occasion can get annoying but she certainly has her cute and funny sides, Chika is the straight man which even has a joke made about it, Ana is the English girl but knows a lot more about Japan than her own native country, Matsuri is the quite type and seems to act or behave younger than her actual age, then there is Nobue who is twenty years old but you wouldn't know it, though she does smoke she seems to spend more time with the 11/12 year old girls than anyone else. There isn't a great deal of other characters introduced apart from a teacher who has it in for one of the male students and a couple of animals; a ferret named John and a dog called Frusciante which i found to be an awesome shout out.OverallThis show is simple, it's funny, it's cute and it is relaxing and is something that is really easy to watch, we are treated to a variety of activities which do include a standard beach and a festival episode.

So, I'm trying to be extremely honest with my assessment.  This is very difficult, as I reaaallly like both this show and the manga.  At the same time, I'm painfully aware of how unnerved some might be by this anime. The manga for this was written and drawn because the author likes little girls.  He says as much in one of his asides.  While this is never truly explicit, there are a couple of shoujo-ai flavored moments that may put people off. In addition, this is a basic slice of life.  If you dislike Lucky Star or Azumanga Daioh, you will dislike this.  It's cute girls being cute, if I'm absolutely blunt.  There's really nothing more you can expect from this. Now, with all that being said, I love this anime.  I found the characters adorable, and I'm already a person who really likes slice of life anime.  This anime falls squarely into my niche, and if you like cute girls, you should enjoy it as well.

Gags that are funny from the outset, cute antics and surprisingly good characters... The interactions are simple but they work really well - thanks, perhaps, to the genius inclusion of the relatable older sister as one of the main cast. This is one of those rare cases where the first episode is honestly the best judge of whether or not you'll enjoy the show. I'd certainly recommend it. Have fun!

Start a new discussion for Ichigo Mashimaro anime. Please be fair to others, for the full rules do refer to the Discussion Rules page.