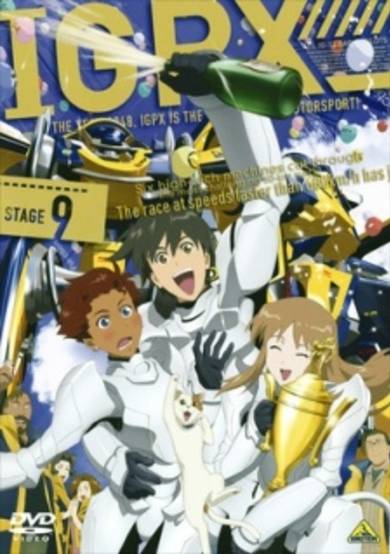 Team Satomi has just been deemed as the winners for the IG-2 lower league and now join the top IG-1 competition. But it's not going to be easy. Young pilots Takeshi, Liz, Amy, and River are going to have to be a team to be number 1, however one thing leads to another with these four. Most important of all, their opponents overwhelm Team Satomi in every aspect, including strategy and skill, as well as funding. One thing is for sure, this is not going to be an easy year for "Team Satomi."

The race between Team Satomi and Team Edgeraid continues and finally comes to a conclusion. Meanwhile, Team White Snow continues to monitor Team Satomi's every move during the race. Afterwards, Takeshi begins to feel the pressure of trying to succeed, while the rest of the team crew try to repair the mechs.

Team Satomi prepares for their race against Team White Snow. However, the race doesn't seem to go the way they expected. And Team White Snow proves that they have some tricks up their sleeves.

Team Satomi, the reigning champions of the IGPX, have been falling apart, and the second half of their race with Team White Snow promises to test their mettle. After being dealt a devastating loss by the new rookies, the members of Team Satomi are forced to make an unexpected roster change before their big match with last year's champs, Team Velshtein

The race against Team Velshtein ends with a shocking conclusion, but Satomi’s Takeshi Jin is spiraling down to an all-time low. Can Takeshi get his act together before the next race?

After the shocking race against Team Velshtein, Team Satomi prepares itself for the next race, this time against Skylark. Can Takeshi get his head in the game and beat his girlfriend, or will it be another embarrassing finish for the pilots of Team Satomi?

Amy is released from the hospital but risks further injury when she attempts to race against her doctor's advice. Meanwhile, Yamma is under a directive from the owners of Sledge Mama to win the championship this year or face getting kicked off the team.

The race with Sledge Mama heats up to epic proportions as Yamma is determined to win. Takeshi and Liz each lose a mech arm early in the race, and Amy still is not fully healed. Does Team Satomi stand a chance when it is so crippled?

Takeshi is having mechanical trouble with his mech again in the all-star race, and Liz is now representing a clothing company in a fashion show causing Jessie to fear that she will quit the team.

The rivalry between Andrei and Sir Hamgra is finally explored. Meanwhile, the playoff races of White Snow versus Sledge Mamma and Satomi versus Velshtein loom near.

IGPX is a nice balance between the popular mech-genre, and the highly overlooked motorsport genre. I'm big into racing like F1 and LMP1, so I had to give this series another go after seeing a couple episodes on Toonami as a kid. The premise of IGPX is simply for the racing team to compete for the championship. The storyline is simple, and doesn't get overly complicated with motives or politics. The team members pilot mechs that race around a roughly 7-mile course, averaging 350 mph. The technical workings are never explained, so one must assume that some kinda propulsion is going on. This doesn't hinder the story, but puts a bit of mystery behind the machines. Team Satomi makes a great returning champion team as much as their former underdog title. During this season, they focus a little less on the public relations of running a racing team, which I felt benefited the first season greatly. Finances are extremely important in motorsports, and I'm glad that they were not left out of the plot. However, no teams ever really seem financially struggling. It would be cool to see some underdog in that category, but that is also the nature of motorsports not being welcoming to unrepresented teams. Can't knock the reality of the situation. The animation is pretty top-notch. Team I.G. is responsible for the much-acclaimed GITS Stand Alone Complex, as well as some work on the recently famous Attack on Titan (Shingeki no Kyoujin). Everything is smooth and looks quality. The scenery is lush, with great detail in most situations. Some of the action sequences use really dramatic angles that are popular in film, which really add to the depth of the scenes. All good stuff. When it comes to the mechs, you have your typical rendered-in-Maya models that are sequenced outside of the animation. This allows for some really cool battles, but I felt like it contrasted too much with the regular animation style. Ghost in the Shell does a better job at mixing 3D-models into the drawn scenes. If they took some time (and had the budget) to do so with IGPX, it would greatly benefit the show. This soundtrack is phenomenal. They use some really interesting IDM music in most of the scenes, along with your typical action-y orchestral stuff. However, the IDM tracks really make the show shine. It reflects the vibe imbued within the Toonami/Team I.G. partnership. The IDM music makes the show feel urban and fresh, while keeping the mood from getting too dramatic. "Cool" sums it up pretty nicely. They did a killer job with the dub on this show, so I'd recommend watching with the English voice overs rather than the sub. It gives the teams a greater cultural identity that is reinforced by their background. There are some popular voice actors on this roster, so don't be surprised if you notice some cross-over. Try to dive into the characters, and you'll be able to enjoy it fully. The characters in IGPX are a blast. Team Satomi has a pretty diverse roster. Liz and Andrei stood out the most to me. They have strong personalities that shine in the more light-hearted parts of the show. The characters are easy to relate to due to the voice acting that brings out their personality well. There is some underlining history that links a lot of the characters together, which creates a solid footing for the story to operate upon. Most of the teams have pretty defined characters who get at least a moment or two to show their individual personality. The show really shines outside of the races, where the team members interact. In this aspect, IGPX is just as much a slice-of-life show as it is action. Team Satomi feels very honest and realistic. At no point was I turned off by any of the actions of the characters in their roles. Satomi's members all have a good deal of insecurities that are explored within the show. However, it avoids being too dramatic by throwing in comedic zingers and twists that keep the viewer on their feet. It plays with your emotions a bit, but in a smart, clever way. It keeps the show from feeling cliché, which is nice considering how easily they could have submitted to typical character traits on a basic level. What does this all make collectively? I would say 26 episodes that feel complete and well orchestrated. There's little-to-no filler, so the storyline constantly progresses. The battle scenes keep you interested, by the show shines outside of the races where the characters get to pick a fight or squash their beef with another team. This is really a gem of a series considering the quality of production and level of care taken into character development, and even just soundtrack choice. It fulfilled my thirst for speed with my underlining interest in racing, as well as the inherent risks involved with action-sports. I definitely that I could watch the series again and be just as entertained. IGPX gets a special place in my heart that I won't soon forget. P.S. Download Toonami's IGPX: Ichi Megamix album. It's a free mixtape that features all music from the show, and some sampling that'll definitely give fans a laugh.

Start a new discussion for IGPX: Immortal Grand Prix (2005) 2nd Season anime. Please be fair to others, for the full rules do refer to the Discussion Rules page.