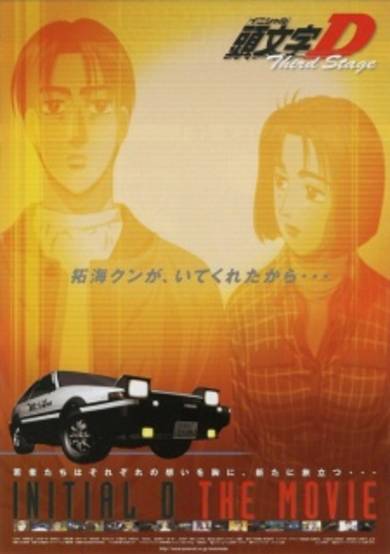 Shortly after graduating from high school, Takumi is approached by RedSuns leader Ryosuke Takahashi and offered to join him in forming a professional racing team. Before coming up with an answer to the proposal, Takumi seeks retribution by issuing a rematch to Emperor leader Kyouichi Sudou, who previously defeated him due to an engine failure. He is also challenged by Kai Kogashiwa, a second-generation street racer whose father was once a fierce rival of Takumi's father Bunta.
User Count7432
Favorites Count57
Start Date13th Jan 2001
Next ReleaseInvalid date
Popularity Rank1527
Rating Rank886
Age RatingPG
Age Rating GuideTeens 13 or older
Subtypemovie
Statusfinished

This is the film installment of the franchise. While the film shows more and more of the downhill races now that our hero joins the touring racing team of Project D. It was very fitting to watch the film around this winter time of year due to the fact that the landscape of Akina is covered in snow and that our characters are celebrating their Christmas spirit. The animation has not changed a bit since the second series, if anything, it has gotten a little worse. The CG is quite atrocious, looking like a drivers ed simulation. After the constant viewing of the series the endless "Para Para" J-pop soundtrack really starts to grow on a person. It really makes me either want to drive fast myself or play dance dance revolution, I can't decide. Characters have much more depth. This time the series focuses more intently into the dramatic relationship between Takumi and Natsuki. Even the side characters show more depth as the graduates high school and start to grow up into the real world.

Start a new discussion for Initial D Third Stage anime. Please be fair to others, for the full rules do refer to the Discussion Rules page.