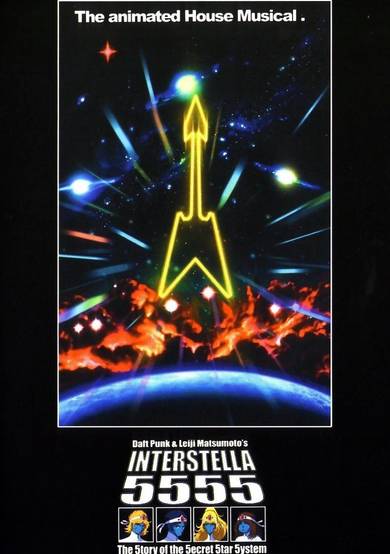 This music video is the visual realization of "Discovery", an album by Daft Punk. It tells the story of a band of four extraterrestrial musicians who are kidnapped and brought back to Earth by an evil manager. Their only hopes lie with a space pilot from their home planet who, after receiving a distress call broadcasted during the abduction, seeks out to rescue them.

All Interstella5555: The 5tory of The 5ecret 5tar 5ystem released episodes

Daft Punk's Discovery album is my favorite album of all time, in fact I have a vinyl of it hanging up on my wall. And this film right here is why I love it so much. When I was about 14, my parents were getting a divorce and I was going through a rough time, and somehow I stumbled upon this movie, and for some reason it really helped me through what I was going through. The plot is simple, a band is kidnapped from another planet and transported to earth, all their memories are changed and they are made to look like humans so they can play music on earth for Earl Darkwood. Meanwhile some kind of policeman from the band's planet comes to the rescue, and is more than willing to since he has a crush on the bassist. Like I said, basic plot, but that doesn't make it bad by any means. The whole entire movie has no dialogue and still portrays it's plot extremely well, which is an amazing feat to say the least. The animation is where this loses a few points though, while I personally love the way it looks a lot, I can see why some people say that it has aged somewhat poorly, but for its time, this level of quality was amazing, so keep in mind what time period this was made in. And as for sound, the soundtrack is the entirety of Discovery in order, and it is damn amazing, I already liked Daft Punk before this movie, but after seeing this, they really became one of my favorite bands ever. If Daft Punk isn't your kind of music, you might not enjoy this movie as much, but if you do like their music, get ready to dance in your seat when you watch Interstella 5555.

*"It's Fucking Daft Punk" -Weapon* Who doesn't like occasional music, and also who on  this website wouldn't like anime. This is the best of both worlds.

If you enjoy aliens, good ol' fashioned techno, and the duo of robots themselves, Daft Punk, you will enjoy this anime movie. Amazing quality animation and you can really feel the characters through their expressions. Simple story but you're still guaranteed to get into it and hope for the best for the protagonists.

Start a new discussion for Interstella5555: The 5tory of The 5ecret 5tar 5ystem anime. Please be fair to others, for the full rules do refer to the Discussion Rules page.