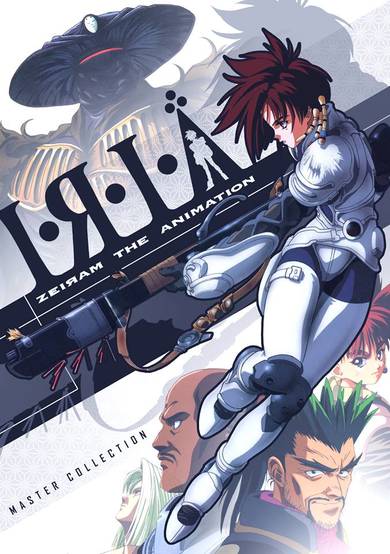 Iria is the story of a girl and the Alien being she loves to hate. The series begins with her brother, Gren, taking a job. He is a bounty hunter, and one well known for his incredible skill. Iria, being a skilled apprentice bounty hunter herself, tags along. What is the job, one might ask. It is to find out what has happened to the crew and cargo of a Space Station. Needless to say, nothing is as it seems, and the war between Iria and Zeiram begins in earnest.
User Count1785
Favorites Count14
Start Date23rd Jun 1994
Next ReleaseInvalid date
Popularity Rank3718
Rating Rank5405
Age RatingR
Age Rating Guide17+ (violence & profanity)
SubtypeOVA
Statusfinished

"Iria: Zeiram the Animation" is a pretty good action oriented OVA spanning across 6 half hour episodes. It tells the story of a young bounty hunter Iria's hunting of Zeiram, the most dangerous life form in the galaxy.The weird opening theme, which sounds like some Sharon Apple song from "Macross Plus", feels out of place and put me off the anime initially. And not being the fastest anime off the block despite its short length, it took "Iria" a couple of episodes to catch my interest, but to its credit it gains more and more momentum as it goes on.The action, though slightly sluggish at times, is overall solid enough to provide a good foundation for the enjoyment of "Iria: Zeiram the Animation", with the appropriately climatic climax being especially good. It's backed up by a pretty good story (albeit one that doesn't explain everything) and some really likeable characters. The roles of the mischievous kids are played out perfectly, as is that rogue Fujikuro, providing comedy entertainment that often had me grinning widely. The animation may not look that great by today's standards, but there are some fantastic character designs. The heroine Iria herself has quite a unique look, while Zeiram reminds me of Yoshimitsu from the Tekken video games.On the downside, I think the anime suffers from small inconsistencies in its characterisation and plot. To name a couple of examples, part of the personality of Iria is hard to pin down since she seem to be inconsistently portrayed from one episode to the next, and I could have sworn the Zeiram's weak point that is revealed towards the end had already been peppered with bullets with little or not no effect in an earlier episode.Even though this OVA does look and sound a bit old, it's still succeeds in providing an entertaining 3 hours. Worth checking out if you come across it.

Start a new discussion for Iria: Zeiram The Animation anime. Please be fair to others, for the full rules do refer to the Discussion Rules page.