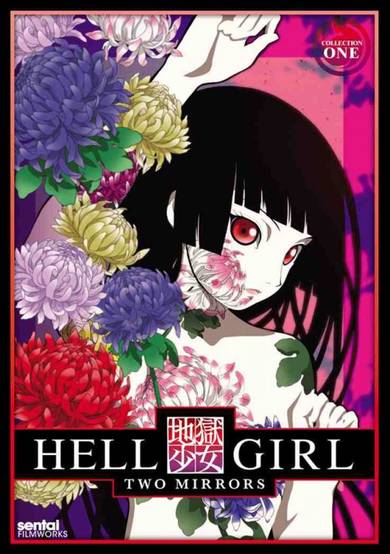 Ai Enma and her companions continue to offer their service of revenge against those who have wronged others, and the price is as steep as ever—for damning the offender to hell, the person exacting vengeance is sent to the abyss as well. As they cast soul after soul into the darkness, a new sinister force is watching them: a little girl named Kikuri. While Ai continues her duties, she meets a boy named Takuma Kurebayashi, known as the "Devil's Child" because of the horrific events that occur around him. Unfortunately, Takuma's reputation leads the townspeople to use him as a scapegoat for those who have been ferried off to hell. When things quickly spiral out of control, Ai must find a way to bring an end to this senseless violence, as it poses a threat to her very existence. [Written by MAL Rewrite]
User Count9715
Favorites Count54
Start Date6th Oct 2006
Next ReleaseInvalid date
Popularity Rank1197
Rating Rank967
Age RatingR
Age Rating Guide17+ (violence & profanity)
SubtypeTV
Statusfinished 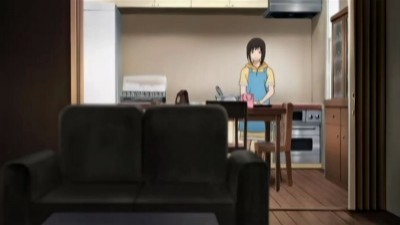 The Girl in the Dark

Onda Maki is being bullied in class, but she doesn't know who is bullying her. She spends every night typing her classmates' names into the Hotline to Hell engine, but always erases it. Her science teacher Kamishiro tries to help her, but Onda always refuses.Eventually, she finds out that Kamishiro is the one who has been bullying her and sends her to Hell. Onda has a new friend, and as they are working after school on a project, Onda discovers that her friend had been helping Kamishiro bully her. 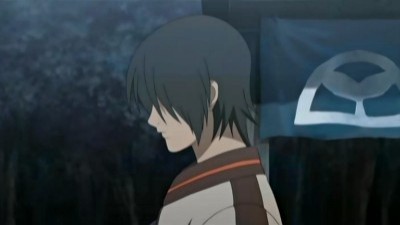 Yayoi's sister, Sumire is missing. She is constantly hearing the sound of bubbles from underwater. She after a while begins to realize her sister is dead. But because she doesn't know the identity of the killer, she can't get onto the website to get her sister's revenge. She blames herself for Sumire's death because Sumire vanished on a day Yayoi didn't walk with her. Yayoi falls into a fountain and has a vision of what happened to her sister. Sumire was kidnapped, raped, killed, and dumped in a lake, which explains the bubbles. Yayoi knows the identity of the killer and sends him to Hell for Sumire. 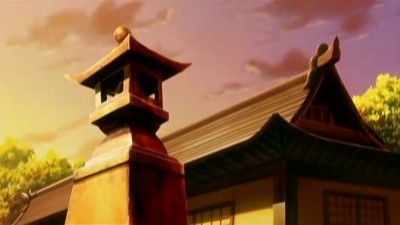 A girl named Tae-pon is obsessively protective of her neighbor, Kei-chan. She refuses to admit her love for Kei-chan because she thinks their relationship would change and then they would drift apart. She knows his girlfriend is a two-timer, but refuses to tell him because she's "protecting" him. Kei-chan enters her room through her window, admits he knows his girlfriend is cheating on him, and then sleeps with Tae-pon when she comforts him. She becomes afraid that their relationship is now in danger of changing and refuses to open her window when Kei says he loves her. She opens her window to see if he's still there, causing him to lose his balance and fall to his death. The next day, Tae-pon sends his ex-girlfriend to Hell for causing Kei-chan to be distraught enough to alter his relationship with Tae-pon and for calling him pathetic. Tae-pon moves to a new area and her new window neighbor looks almost exactly like Kei-chan... 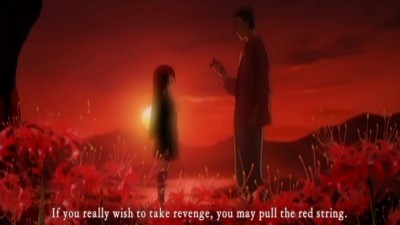 Yagisawa's wife, Chinami, is in the hospital, fighting an illness. He'll do anything for money to help her. He enters the site to get revenge on Hhouki, the man who tricked him into killing a man for money. Hhouki wanders into the hospital and tells Chinami that her husband killed a man, causing her to go into a coma due to her distress. He eventually send Hhouki hell (for refusing to help his wife and blackmailing him). When he returns to the hospital to tell his wife that everything is okay, she no longer remembers him. Kikuri is seen wandering around the hospital and having a strange effect on Chinami. In this episode, she leaves the mortal world with Ai and officially becomes part of the group. 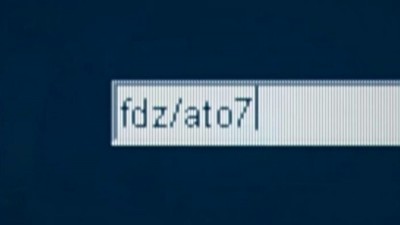 Yamada Leon, is constantly bullying Oi-chan. So Oi-chan sought a contract with Ai but he changed his mind after learning about the consequences. Leon falls in love with a high school girl named Miyahara Izumi. He plans to confess his love for her and leave the gang he is in. However, Leon's gang leader refuses to let him leave the gang. After Leon overhears Oi-chan talking about the Hell Girl, he made Oi-chan show him the Hotline to Hell. Leon's gang leader tries to kidnap Izumi to stop Leon from confessing to her. However, as he kidnaps Izumi, Leon sends him to hell. After continuing to bully Oi-chan, Leon steals his wallet and plans to finally confess to Izumi once again. While he's speeding down the street, he crashes and goes almost immediately to Hell. 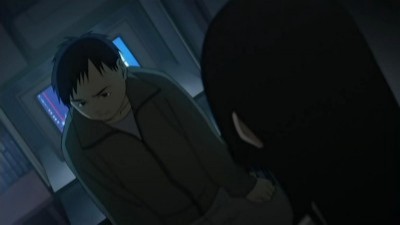 Where the Sun Shines

Hosono Souta is a boy who always sits in the infirmary. Because of this, his classmates make fun of him. He falls in love with a classmate, Nitta Kiwako, because she was the only one who did not make fun of him. He dislikes her current boyfriend. Hosono attempts to access the Hotline to Hell, but Ai rejects him. While Hosono is stalking Kiwako at a bowling alley, he overhears her boyfriend suggesting to his friend, Sawazaki, that he will "lend" Kiwako to him so that Sawazaki can finally lose his virginity. Ai appears to Hosono that night, but while he begs her to save Kiwako, he refuses to sell his soul in exchange for revenge. Kiwako later tells Hosono that she accessed the Hotline to Hell and has sent her horrible boyfriend to Hell. Hosono is shocked that she would agree to go to Hell for that and turns down Ai's help once and for all. At the end of the episode it is shown that Hosono purchases a blade, and plans to kill Sawazaki. 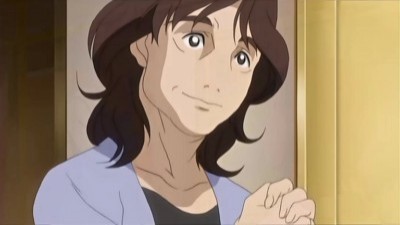 Ougi Emi’s family has changed ever since her brother, Ougi Tatsuya, died in a motorcycle accident. Her mother is ignoring the family to get the city to take the blame for her son's death. Tatsuya was everything for his mother and Emi tries to help her mother get over it, but her mother continues to be unconcerned for the well-being of her daughter. Emi learns that her brother had one of Ai's dolls but hadn't used it yet, now it belongs to Emi. One day her family becomes dysfunctional and she sends her mother to hell. After that, she realizes that she's better off without her mother. 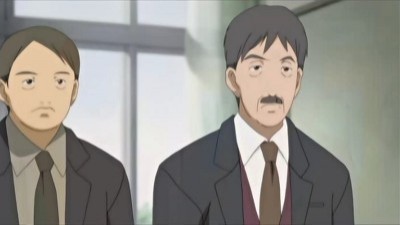 Baba Shouko is a teacher everyone dislikes because she frequently scolds students and is very strict. A fake Hotline to Hell was created by somebody and it is circulated among students who were just scolded by Baba sensei. Tracing was carried out and they concluded that a student named Ikami Waka created and circulated the fake Hotline to Hell. However, Ikami claims that she did not do it. On the same night, another teacher named Kuriyama Mami calls Ikami and tells her that it was Baba who made the fake Hotline to Hell, blames her for it and told Ikami to come to school. Mami-sensei waits in school for Ikami to come and tried to convince Ikami to access the real Hotline to Hell to send Baba to hell. To her surprise, the one who turned up is Ai. Mami and Ai already knew each other from their pasts. The truth is Mami was the one who created the fake Hotline to Hell and blamed the students for it. It was all because Baba scolded Mami when she was young and she blames Baba for all her problems. Baba comes and types in Mami's name into the real Hotline to Hell, as a punishment for an attempt to use her students as sacrifices. Baba agrees to go to hell as she blamed herself for coaching a teacher like Mami. 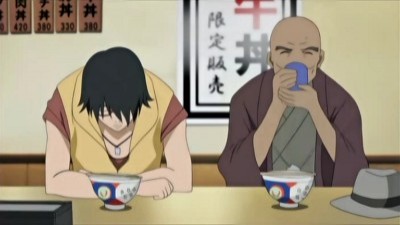 Suzaki Maho hates her brother, Suzaki Miki, for chasing away her boyfriends. Maho believes that because he is a model, he feels that he is prettier than she is. The pair has no parents thus they only have each other. Maho discovers that Miki dresses up as a woman and steals her boyfriends away. He later confesses his love to his Maho. When Maho can no longer take the pressure, she ends up sending him to Hell. Hone Onna meets a director named Negoro Tetsuro. He wants Hone Onna to be the protagonist (Sone Anna) in his film. He is obsessed about writing screen plays. He has a wife and two lovers but seems uninterested in all of them. Eventually Tetsuro’s wife, one of his lovers (Kumiko-chan) and Hone Onna become good friends. Then they decided to go to the hot springs. But being clumsy and foolish, Tetsuro bumps into a stranger’s car and a few hours later, spills coffee on him. That man, named Gyouta Hauhiroku, sends Tetsuro to hell. In the end, Hone Onna erases herself from Kumiko and Tetsuro's wife's memories. This episode depicts the flash-backs of Hone Onna.

The anime is pretty interesting because each episode is a different story and they all relate to the main characters. It's a little creepy but I liked it. The ending was fantastic too. Very unexpected and it was very sad so I had tears coming out. XD

Start a new discussion for Jigoku Shoujo Futakomori anime. Please be fair to others, for the full rules do refer to the Discussion Rules page.