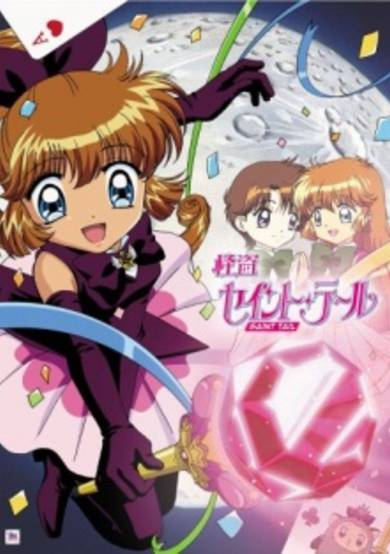 Meimi Haneoka, 14, is a normal girl during the daytime, but during the night, she assumes the "position" of Saint Tail, a modern-day Robin Hood who steals from thieves and gives items back to their original owners. She is aided by her friend, Seira Mimori, a nun-in-training, and she is chased by her classmate (and soon-to-be love interest), Daiki Asuka (often called "Asuka Jr."). (Source: ANN)
User Count1545
Favorites Count22
Start Date12th Oct 1995
Next ReleaseInvalid date
Popularity Rank3965
Rating Rank1670
Age RatingG
Age Rating GuideAll Ages
SubtypeTV
Statusfinished

A string of thefts convinces Asuka Jr. that Saint Tail is behind them.

A notice by Saint Tail to Asuka Jr. starts rumors of the two working together.

Meimi plans to buy a hedgehog pet, only to have it purchased by someone with a devious plot for the animal.

To stop a forced wedding, Saint Tail must steal a wedding veil.

A First Rendezvous of Tears?!

After Asuka Jr. receives a theft notice from Saint Tail, Rina takes over operations to capture her.

Rina and Asuka Jr. make a deal: If Meimi is Saint Tail, Asuka Jr. must be Rina's boyfriend. If not, Rina will stop following Meimi around.

Megumi Tachibana is one of my least favorite shoujo mangaka. All her stories end poorly, all her male characters LOOK EXACTLY THE FUCKING SAME (which is stale and boring) and a presence that is now a principal to continuously copy in the mahou shoujo genre. Well, news flash! This isn't original, either. Lupin the III did Phantom thieves better.  Story is the pinnacle of copycat anime that came after it. Follows the story of Meimei, who is an ordinary middle school girl by day, and the phantom thief Saint Tail by night. She steals objects and returns them to their original owners. And of course, the police on her tail. She is constantly pursued by Asuka Jr, whom is her classmate and eventually he turns into a love interest. Each episode, it shows Saint Tail doing phantom thief stuff. This story is the pinnacle of copycats. Everything wants to outdo the mass hit success Lupin the III. This, however, is the first anime that did magical girl phantom thief, but it is of course, not the first one to do this, even, there was a manga before this called "Man of Many Faces" this was by CLAMP. It was short, but that one came before this, and Lupin III kind of started this all. The story comes off as bland to me in Kaitou Saint Tail because of this. It's cute, yes, but I feel that the anime that even came <i>after </i>it (Kamikaze Kaitou Jeanne, DN Angel, even though I hate it) did the Phantom Thief genre so much better. This one is even worse with "episodic syndrome" than Kaitou Jeanne, and the writing... too typical for my tastes. The animation is very old since this anime was made even before I was born. But some of the elements are really annoying. The colors are terrible. I know--that's a given, this anime is old. But the pink uniforms are bloody awful. Whatever studio did this anime, I don't know why they used such bright colors. At this point in time, all anime is handrawn, but the colors aren't get any justice this time from me. (I'm usually lax with older anime for this, but not this one.) All the soundtracks decent, though. The voice acting is fine and with its time. That's the only thing I can give more than a 4 for is the sound. The characters are rather bland and pretty much set up how all other phantom thief anime are going to be in the future. Also, I don't like Asuka Jr. Like, at all. All he does is obsess over Saint Tail all day long. (Like how Miyako obsesses over capture Kaitou Jeanne in Kamikaze Kaitou Jeanne, but at least I feel SHE has a reason to.)  Overall, I don't like this anime. It sets up the pinnacle for all other phantom thief anime before it, and something I forget this is the first anime to bring about "phantom thief magical girls". You're better off just watch Lupin III.

Start a new discussion for Kaitou Saint Tail anime. Please be fair to others, for the full rules do refer to the Discussion Rules page.