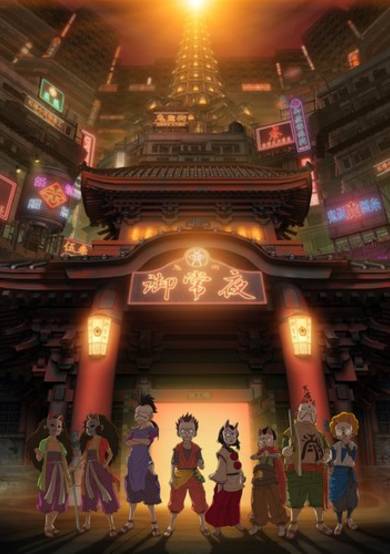 Among the ruins of the city, there is a game only children can play. It is called "Otokoyo"; a game of hide-and-seek. But whenever children play this game, one by one they would disappear into the blinds of the buildings... The story begins when a boy enters the world of Otokoyo, to find his missing sister.

Kakurenbo is a truly thrilling anime. First seeing this when I was 5, I wet my pants silly. But when watching it now and being much older, it still gives me a good round of goosebumps. Honestly though, I can't think of anything that doesn't scare me now. Plot- The story focuses around a boy playing hide-and-seek so he can find his sister. The children who play this game all disappear, believed to be spirited away by the demons who chase the children. I think that this was actually a great idea for a short film, especially since it gave a somewhat complete feeling towards the end of it. One of the most creepy parts of this film is the fact that they are being chased by spirits, in the dark, alone. The last one to not get caught- well, I'll let you see for yourself. Animation- Kakurenbo was done by what is called "cel shading". What this is is the process of taking computer graphics and making them look hand drawn. I think style of animation is beautifully done because it made it more fluent and graceful moving, but it gave a fitting edge to the overall 'feel' of the story. I really enjoyed the backrounds and lighting of this anime, because it got you scared at the right moment. Although none of the spirits were actually all that scary, its the thought (or at least for me) that I would see that hideous thing in the dark that really rattled my bones. Sound- I don't actually have too many complaints here. Nothing really stood out to me besides the creepy music played. I would suggest watching it in the subbed, however. Character- Kakurenbo does not have all too much character development, in my eyes. But even so, all the characters had a sustainable variety of characteristics. I remember someone saying that they believed that the fact that they had on masks the entire time was to disconnect the character, in order to give it a whole level of scary. And I think this is quite true, actually. ------ Even though this is one of my first reviews, I really do hope this will give someone interested in this film a good idea on what they are about to see. All opinions are my own, so if you feel differently, don't fret.

"Kakurenbo" is a very unique horror tale of Hide and Seek. Story: The story of a game of Hide and Seek in a special part of a desolate Tokyo (I assume it's Tokyo). There must be seven (or more) kids that show up to an area after following the signs that spell out each individual syllable of O-To-Ko-Yo, that's a neat idea. But whoever plays the game, never comes back. Art: The art is cel-shaded, and done very well, it's actually better in here than in Coicent, amazingly for Kakurenbo being done 6 years earlier. The show does feel creepy the way should, they did a great job. I especially think the scaling down the city with the kids whispering about the "game" was very well done. The cinematography is nothing special, it gets the job done. I think it would have been better if the show was animated in 2D. I think the show could have used a bit more color too, he could have gone the "David Fincher" route, and make whole rooms color tones, instead of there being no light and mostly gray the whole time. Luckily there's just enough variation to keep you interested. Sound: I actually liked the music in this production, it's well done traditional asian music (Very bombastic). They needed to do a second draft on the post production of the sound though, because at times, especially at the beginning, the music was almost, if not, louder than the voices speaking in the show, and if I did not have subtitles, I wouldn't have understood them on those scenes. The voice acting, and sound effects, get the job done. Character: There's a bit more character (If you can call it that) in here than in Coicent. Most of the characters a pretty self explanatory... Most. Noshiga "Boss" is a sceptic, who is actually afraid of the demons. His two henchman "Suku" &amp; Tachiji are the smarter (Slightly), well, lackeys. "Hikora" is worried, looking for his sister who played the game a while back, with the help of his best friend "Yaimao". "Inmu" and "Yanku" are mysterious, I don't know anything about them. And the 4 demons are just demonic. Kimotori "Liver-Taker" Chitori "Blood-Taker" Aburatori "Oil-Taker" Kotori "Child-Taker" And another mystery demon. Who is this mystery demon? Spoiler---------------- --- The one who is IT. --- Enjoyment: This was enjoyable, quite a unique horror story. The ending was quite good as to summing up the game. ------ Comments: This production was well made, and for the budget that you would imagine it would have, it was very well done. I saw that a good portion of the art production was done by the director "Shuhei Morita", he's quite talented. ------ Overall: A good horror tale for if you want to creeped out, ever so slightly. ------ I must say, for some reason I couldn't enjoy this episode very much, despite what I said. I just can't get into the direction.

Start a new discussion for Kakurenbo anime. Please be fair to others, for the full rules do refer to the Discussion Rules page.