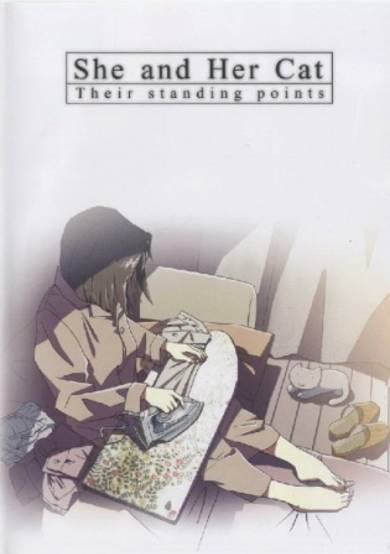 Kanojo to Kanojo no Neko

Do you believe in love at first sight? This short but sweet film revolves around She, a woman whose name is never uttered, and her pet cat, Chobi. Their first meeting was beautiful. One rainy day, She found Chobi abandoned outside and decided to bring him home with her. Chobi instantaneously fell for his kind and gentle owner. He had not only found a home, but also the love of his life. But can their relationship ever become anything more than just pet and owner?Kanojo to Kanojo no Neko is a short animated film that explores love in an extremely innovative way. The subtle romance is both heartwarming and thought-provoking and is sure to bring a gentle smile to your face.

All Kanojo to Kanojo no Neko released episodes

Originally published on Anime Viking: http://animeviking.wordpress.com/----------Told entirely from a cat’s perspective, She and Her Cat remains one of Shinkai’s more interesting ideas to this date. But similar to Tooi Sekai, She and Her Cat is more of an experiment than a proper story.It is more about how it is told than exactly what is told. Despite dropping a few subtle, yet too vague for speculation, clues at something larger than what we witness, it is clear that this is not important to She and Her Cat.The way it is conveyed, on the other hand, is smart. As I mentioned, everything is from a cat’s perspective, which lends itself well to creating sort of a melancholic atmosphere. This, along with the equally melancholic music and visuals, helps draw you in for a neat, if not too special, little ride.

"She and Her Cat" is a short 5 min OVA featuring a cat talking about his owner. It was okay... but to be frank, I'd be pretty surprised if a 5 minute anime can be much better or much worse than simply "okay". The animation of this short clip seems to clash in places - the drawing style of the cat sticks out like a sore thumb in comparison to everything else. Also the relationship between the cat and the girl (as described by the cat to his "girlfriend") feels a little freaky to me. What does stand out for this anime is the melancholy atmosphere it manages to create in such a short space of time, but sadly, there's only so much you can do in 5 minutes. As a result I found "She and Her Cat" to be a cute little anime that is ultimately very forgettable. That's not to say it's a bad anime - I wouldn't diss it or anything, but I honestly find it impossible to get the same amount of enjoyment out of a 5 min OVA that I can from a season long series, just like I can't derive the same amount of pleasure from a poem than I can from novel. Call me uncultured if you want, but I'm just not really a poem kind of person, and "She and Her Cat" is definitely a poem type anime.

“Other Worlds” and “She and her cat” are Makoto Shinkai’s first works and his starting points in the anime industry. In particular “Kanojo to Kanojo no Neko” (“She and her cat”) raise his popularity and made him reach first place in 12th DoGA CG-animation contest. This five minutes animation feature the relationship between a cat, Chobi and his owner, “She”. The story, told from the cat's perspective, cover a year of his life, from the moment of their encounter to the next spring. The beautiful writing of the short story let you enjoy every second of the five minutes. From the words of the cat you can understand his feelings and immerse yourself in his story. In five minutes is almost impossible to define strong characters, but in this case we have “She”, Chobi’s owner, that through the cat’s word gets described and it’s not easy to forget, even if her name is a mystery. In general Chobi and “She” aren’t anonymous character you actually come to care about them. Mimi (Chobi’s cat girlfriend) is only a side character that helps with the flow of the story and its emotional impact. Just on a side note I think that Shinkai’s weakness are the characters and I find funny that the characters in “She and her cat” are better that the ones in some of his other movies. The animations and CGs are beautiful in their simplicity, also the choice of using black and white helps to create the right mood for the story. The music is nice; this soundtrack is Tenmon’s first piece for an anime. In the end I will recommend the vision of this OVA to everyone, if you haven’t seen it go and watch it immediately it’s only five minutes and you will never regret seeing it. And only one final word: ***"This world, I think we like it."*** ----------------------------------- Originally published on: http://brainlessreview.altervista.org/

Start a new discussion for Kanojo to Kanojo no Neko anime. Please be fair to others, for the full rules do refer to the Discussion Rules page.