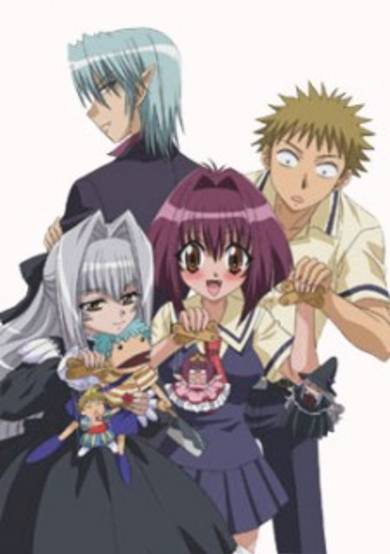 Vampires—supernatural beings that feed on the life essence of the unsuspecting at night—have been around for centuries. However, high schooler Karin Maaka is unusual, even among her own kind. Unlike her vampire family, ever since she was a child, Karin has suffered from polycythemia: a rare disorder which causes her to periodically produce excessive amounts of blood. And the more blood she produces, the more anemic and lightheaded she gets, ultimately leading to frequent nosebleeds. Her only solution? Force her excess blood onto random strangers, which surprisingly causes these "victims" to become livelier and happier than before. With her siblings—Anju, her reserved yet affectionate younger sister, and Ren, her womanizing elder brother—helping her abilities remain a secret by altering the affected humans' memories, no one is the wiser. That is, until Karin's newly transferred classmate, Kenta Usui, finds her behavior suspicious. And to make matters even more complicated, Karin feels her blood reacting unusually to Kenta's presence. [Written by MAL Rewrite]
User Count10486
Favorites Count70
Start Date3rd Nov 2005
Next ReleaseInvalid date
Popularity Rank1125
Rating Rank3883
Age RatingPG
Age Rating GuideTeens 13 or older
SubtypeTV
Statusfinished Karin is almost having a regular day at school, but then a new transfer student comes to her school. When Karin finds her new victim and injects her blood into her victim's body, and Kenta sees the whole thing! The next day at school, Karin and Kenta talk, Kenta possibly finds out her secret and Karin has a huge nosebleed... 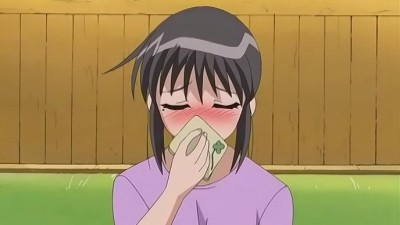 My Preference is Embarrassing

Karin learns that she has a "normal" vampire's trait. She has a preference in blood. 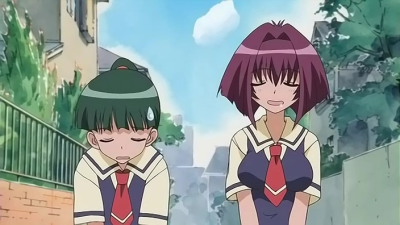 Karin tries to figure out what happiness is. Being Exposed is Embarrassing

Karin decides that she needs to keep Usui happy, so she can maintain apathy for blood. She thinks the best way to do this is make him lunches. My Whole Family is Embarrassing

Usui discovers that Karin is a vampire. What will her family do about it? An Energetic Mother is Embarrassing

Usui works every day at the restaurant to the point of exhaustion, making him really unhappy. With Karin's "taste" being unhappiness it makes it impossible for Karin to be around him without overflowing. 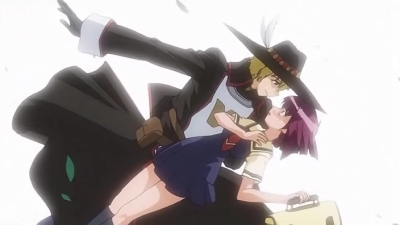 Being Chased is Embarrassing

To add to Karin's problems, there is a new, loud mouth, transfer student who claims to be from a long generation of vampire hunters. Will he find out about Karin?! Being Discovered is Embarrassing

Karin has an "accident" in the hallway. The hunter suspects Usui of being a vampire when the blood is found. How will Karin and Usui cover this up? Looking Back... is Embarrassing

We get to see Anju and Karin's relationship. Anju has flashbacks of her childhood with Karin. 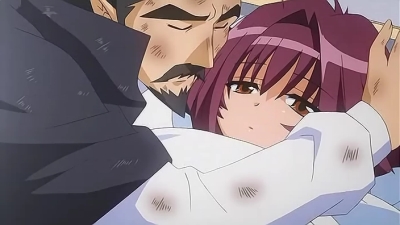 Karin fails a test, so Usui tutors her. Karin's dad plays the over-protective dad, and embarrasses Karin by following them around.

Wow, so I've never had a anime be so good for 20 episodes, then completely crash and burn as hard as the last 4 episodes did for me. I actually quit watching at episode 23 out of revolt at what was happening. The last episode is just a mockery of the whole series in my opinion and for nothing, it ends just as you would expect if the last 4 episodes didn't exist. This to me is raising the stakes for the sense of drama, and the cost of everything else. It's a terrible way of handling a series and wrecks what otherwise was a great series overall for me. I really did enjoy it before the last 4 episodes, to the point of which it might have been the best handling of vampire romance I had seen. I took the time to write my first review simply as a warning. It was a great series that crashed and burned amongst the hardest I've ever seen. And in the end for nothing, it accomplished nothing that wouldn't have happened if they had not tried to artificially raise the stakes by making all the character simultaneously become incompetent, idiotic, and pathetic all at the same time.

I thoroughly enjoyed this anime. I was actually looking for something sappy to get into at the time, but it ended up being deeper than I thought it would be. Although it is at the forefront a romance anime with several funny moments and should not be watched if you're looking for something especially dramatic. About half way through the show they begin hinting at something much larger about to happen, and it ends up being not nearly as big of a scope as they implied. By the last episode it completely comes back to being a light-hearted comedy romance and throws away every inch of drama. Which for the genre and purpose of the anime actually fits rather well, but it did catch me off-guard at the sudden change. Basically it nearly forgets itself in the last few episodes, but I think the rest of the anime alone is worth the watch. Interesting characters, scenes that show emotion well, and it plays on the troubles of the lower-class and high school romance very well. And it goes 12 whole episodes without making boob jokes!

Start a new discussion for Karin anime. Please be fair to others, for the full rules do refer to the Discussion Rules page.