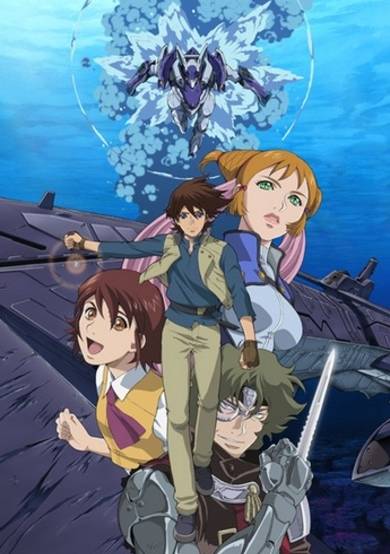 Mars is now almost entirely covered in water. Humanity exists in large city-ships that float through the open seas. But life is hard for those who live on Mars—the economy is in bad shape, work is scarce, and food is expensive and highly prized. Gram and his friends try to do the best they can, but the work keeps drying up. Some have taken to a life of piracy to combat the corruption in the government; one such group is the pirates of the feared Ship of Aurora. And the Earth government, which rules Mars, has dispatched a new team of military pilots to combat them. In their specialized mecha called Round Bucklers, they must make the seas of Mars safe for humanity. Caught in the wrong place at the wrong time, Gram finds himself on the run with the most notorious pirates on Mars. But here's the thing—he's starting to like them! (Source: Bandai Entertainment)

Economy is bad on Mars and Gram has lost his job again today. Then his childhood friend Vess appears before him...

Gram becomes crew member of the Aurora. But because of his carelessness, the Aurora is attacked by Round Bucklers.

Junior takes an RB out without permission and is caught by the Earth Forces. Vess begs Gram to leave the pirate's life.

The Aurora is being repaired before departure. Gram goes to town to make his farewells but he comes across Vess again!

Anna's Struggle! The Fleet of our Dreams

The granddaughter of Earth's president Enora has been kidnapped. The Aurora starts to be hunted down for it by error!

Ah! Revolution of Glory and Passion!?

The crew has to capture the hit-and-run ship that damaged the Aurora. But hidden weapons are found during the chase.

Friend or Foe!? The Mercenary Pirate

Gram is saved by a man with an artificial arm who claims to be an acquaintance of Elizabeth, the Captain of the Aurora.

The Aurora crew boards on a luxury ship of Earth nationality where Martian laws do not apply. Enemies happen to gather.

The Aurora has to face a giant creature. Gram attempts to fight it with his RB, to prevent the Aurora from sinking.

Gram helps an old woman but this drags him into an unexpected situation. What's the real purpose of the old woman?

Start a new discussion for Kenran Butou Sai: The Mars Daybreak anime. Please be fair to others, for the full rules do refer to the Discussion Rules page.