Akito doesn't want to fight. Despite a childhood spent on the anime Gekiganger 3, a Mecha show, he'd rather cook than pilot a Mecha. Fate intervenes when his home on Mars is destroyed, and he is transported instantly to the Earth, mysteriously. He has questions no one can answer fully, but follows a girl from a chance meeting in hopes to discover any. The girl, Yurika, is captain of the private battleship Nadesico, and in order to follow her, he enlists as their cook. Possessing the nanite implants that allow to control mechas, he's a handy backup pilot for the mechas of the Nadesico. He joins a crew bent on avenging Mars that seems to be composed of only misfits, otakus, and ditzes; however, in reality, they are handpicked experts. They take their own private war back to Mars to face the harsh reality that life may not always be like a Giant Mecha series. (Source: ANN) 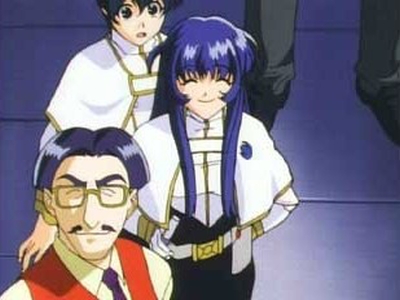 It's the late 22nd century, and the Jovian lizards are attacking Earth. Nergal Heavy Industries decides to build its own battleship, the Nadesico. Captained by the ditsy yet tactically brilliant Yurika Misumaru, and crewed by an bunch of misfits, how will the Nadesico fare in its first battle against the Jovians? 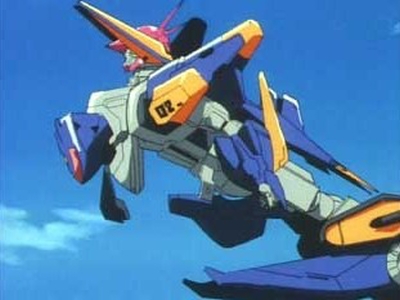 Leave the Blue Earth to Me

Not liking the idea of a powerful battleship in the hands of civilians, the United Earth military sends Admiral Misumaru's fleet to take control of the Nadesico. Will Yurika be able to protect her ship from her own father? And will Akito ever find out the truth about his parents' deaths? 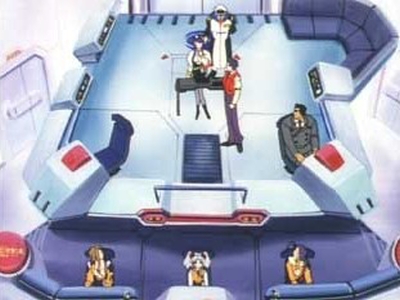 A Goodbye That Came Too Soon

The Nadesico's next destination is Mars, but in order to get there, it has to pass through the Earth's various lines of defense, including the Big Barrier. Can the Nadesico convince the United Earth forces to take down the barrier, or will they just have to defy Earth and punch their way through? 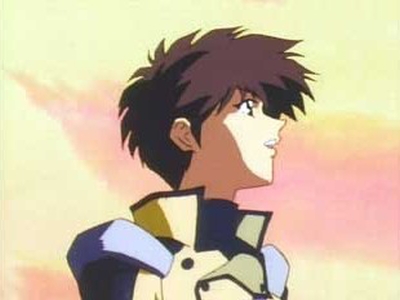 The Nadesico heads out to the L2 colony to pick up some new Aestivalis pilots, but end up on a rescue and retrieval mission of a more urgent nature after the colony is destroyed in a surprise attack. 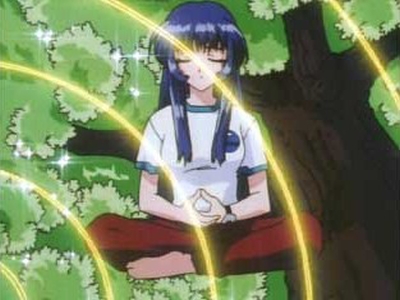 On the long and boring trip to Mars, Mr Prospector insists that Yurika take the time to perform funerals for all the crewmembers and civilians that have died so far, a never-ending task that leaves her no time to see Akito. 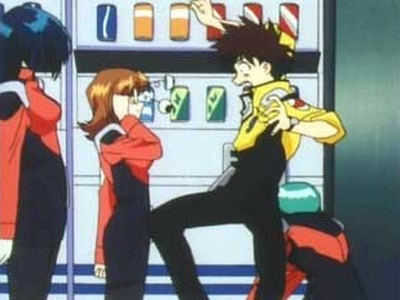 Having made it to Mars, the Nadesico fends off an attack and locates an underground colony of survivors. But rather than being grateful to be rescued, the survivors have no intention of leaving their home, because they believe the Nadesico will be desroyed before it gets back to Earth! Can Yurika prove that the Nadesico is up to the task, or is the colonists' dire prediction all too accurate? 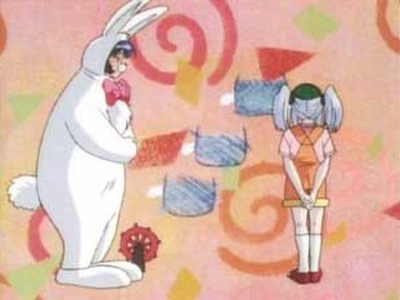 The Song That You Will Sing One Day

Whilst Yurika and Inez put together a ""Get to Know the Nadesico"" broadcast to explain the Nadesico's recent adventures on Mars, the crew's thoughts turn towards finding a way to repair their ship enough to leave Mars and head home. Meanwhile, Akito has issues of his own to work through when he learns that it was Admiral Fukube's fault the Jovian chulip destroyed his home on Mars. 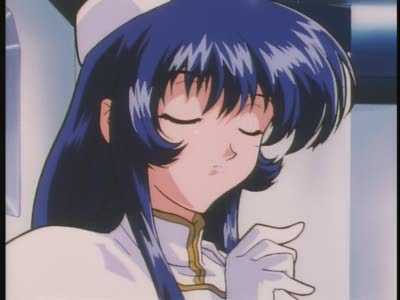 The Nadesico returns to Earth via the tulip on Mars, only to find that 8 months have passed while they were inside the chulip, and that Nergal has built a second battleship. Meanwhile, on the battlefield, Akito discovers that his paralysing fear has returned, making him a vulnerable target for the Jovians... 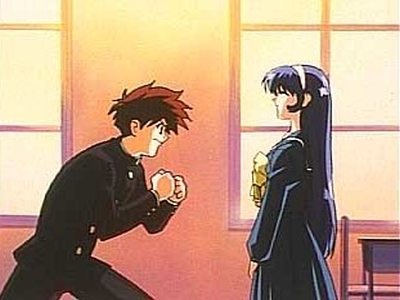 The Miracle Operator of the Kiss

Whilst Admiral Munetake sends the Nadesico to rescue a goodwill ambassador from a glacier, Megumi decides to use her free time to get closer to Akito in a virtual reality simulation of a high school fantasy. But can Akito commit to Megumi when his childhood memories of Yurika keep interfering? 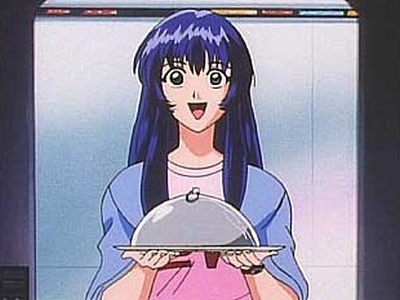 The Dangers of Femininity

Despite being ordered to investigate a giant chulip on a tropical island, the crew decide to first enjoy some swimsuit time at the beach. Meanwhile, having slipped away from the attentions of his admirers and their nightmarish attempts at cooking, Akito runs into a girl who seems to embody his idea of the perfect woman. Can reality ever match up to fantasy, or is Akito in for a big disappointment?

I heard rumours that this was once voted by Japanese viewers as the best anime ever.Why????"Martian Successor Nadesico" follows the crew of a battleship named, er, Nadesico, as they travel through space while battling alien forces. Having watched this show, it's quite clear that it's the inspiration behind "Vandread" - you can see that just from the strikingly similar character design styles with their ultra round eyes . "Martian Successor Nadesico" itself also seems to be derived from "Super Dimensional Fortress Macross". Perhaps it's trying to parody that classic anime, but it's hard to tell, since I don't find "Martian Successor Nadesico" to be very funny despite its best attempts at comedy. The comedy is the kind that I loath. Occasionally, some parts did made me laugh, and most of these involve the anime's parody of old, cheesey mecha anime from the 70's and 80's. I remember one scene in particular where a bunch of guys are scrutinising one such anime called "Gekiganger 3", and one of them made a side-splittingly funny comment on the fact that the pilots are constantly shouting out the moves they use. Man... what a classic line that is, so I won't spoil it for you here :P Other than its piss taking of old mecha anime, most of the rest of the comedy is pretty rubbish. Most of the jokes fail miserably, and in fact sometimes I didn't even realise that a joke has been attempted till a few moments afterwards because the punchlines are so understated.The production of "Martian Successor Nadesico" is not great. It has such a strong outdated early nineties/ late eighties feel to it that I couldn't believe my eyes when I read that it's a show from 1996. The animation looks old-ish, the audio is a bit on the quiet side and sounds slightly muffled most of the time, causing the voice acting to sound flat. The worst thing though, is that everything seems to happen in such a casual manner, and there is no emphasis on key events when they occur, resulting in most of them flying straight past me without me noticing. The story feels like it has a lot going on, but I found it difficult to follow, partly due to the aforementioned under-emphasis on important moments, and partly because I found things were often moving too fast for me to pick up what was going on. It's a good example how NOT to build up and execute twists in the plot. All of this adds up to a rather lacklustre, detached viewing experience for me, as though I'm watching it from afar and not really feeling engaged with the anime.I sense the characters has some substance, but the constant slap stick comedy makes it hard to tell, since you need to cut through such a thick layer of crap just to get a better idea. And in Ruri they have another one of those stereotypical anime girl with a deadpan voice that usually bugs the hell out of me. But wait! This one actually has a reason for being the way she is, and so I'll overlook this small annoyance in the her case. In fact, the episode uncovering Ruri's past is arguably one of the finest in the series.On the whole, I found "Martian Successor Nadesico" to be a laborious task to watch. The whole thing feels dull and amateurishly put together, and even though the last few episodes are relatively exciting (key word there being "relatively), the plot is even more difficult to follow in those episodes. If this series is more exciting, like "Last Exile", then I might be more motivated to try and work out the story, but in the case of this "Martian Successor Nadesico", that just feels like a waste of time - why try and work out something you don't particularly care about? At the end of the day, it probably says a lot that I rather have watched that "Gekiganger 3" anime that the crew of Nadesico was watching than "Martian Successor Nadesico" itself - at least the former looks like it's rather entertaining, and it reminds me of the likes of "Getter Robo" which I used to love when I was young. As for "Martian Successor Nadesico", I'd have to be tortured before I'd watch it again... in fact watching it itself can be considered a torturous activity.

Parody anime isn't an easy feat to pull off. But in the case of the Nadesico, it is easily one of the best parody anime I have ever seen. The story is a parody of most "Real Robot" anime set in space (in fact, it has a mecha anime INSIDE the show that pretty much everyone is a fan of) - however, it has characters that are copied from *Neon Genesis Evangelion*.  But unlike Genesis of Aquarion, which I feel rips off the characters from NGE, since the characters are parodies of most of the same roles from NGE, I'm fully willing to let that slide - besides, just like in RahXephon, they aren't played to the same extremes (for example: while the Nadesico version of Asuka is a tsundere, she's more friendly then Asuka).  The exception is Yurika, Nadesico's version of Misato Katsuragi, who happens to be MUCH more amorous than Misato - and she's very open about it. Animation wise, this is by Xebec, the makers of Mnemosyne, one of my favorite anime of all time (#3, to be precise).  However, whereas the animation in Mnemosyne was more realistic and more akin to stuff you'd find in anime associated with Type Moon, in Nadesico, the animation is actually more cartoonish - it's closer to DNAngel than it is to Canaan. Sound, it's par for the course for most mecha anime of the time, except with a more positive spin - and as a fan of mecha anime, I really appreciate that. However, there is one flaw - if you go into this with little to no knowledge about mecha anime, you will miss most of the humor.  I would first recommend that you watch at least 3-4 shows - at the very minimum, watch one Gundam series (I would suggest Gundam SEED or Gundam 00) and Neon Genesis Evangelion.  Similar to how you'll find Excel Saga funnier if you watch it with more anime under your belt, the more mecha anime you've seen, the funnier you will find Martian Successor Nadesico. FOR FANS OF/FURTHER RECOMMENDATIONS: RahXephon (another post-NGE reconstruction of the mecha genre) NGE (Obviously) Break Blade (a very recent mecha anime that Xebec was involved with the production of - take your pick between the movies or the TV show) Gurren Lagann (which Nadesico heavily influenced) Excel Saga (similar "It goes to 11" style of humor, and several voice actors are shared between the 2 shows) Any Gundam show (except SD Gundam force, because no one likes that show) Code Geass (a real robot anime that's also really good)

Start a new discussion for Kidou Senkan Nadesico anime. Please be fair to others, for the full rules do refer to the Discussion Rules page.