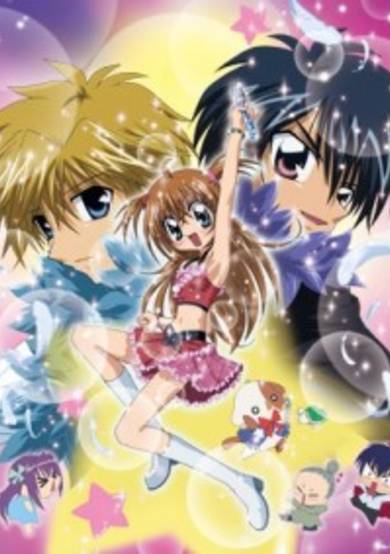 Kirari Tsukishima, a gluttonous 14-year-old beauty, is a girl who does not care about idols and the entertainment world because her mind is occupied by food. Her obsession with food only causes her to be clueless about love. One day, after saving a turtle that is stranded in a tree, Kirari meets with a handsome and gentle boy named Seiji, who gives her ticket to a SHIPS (a popular idol group) concert to show his gratitude for her saving his pet. Kirari then storms off to the concert and runs into another boy, who tears up her ticket and warns her to stay away from Seiji because she and Seiji live in different worlds. The outraged Kirari then sneaks into the concert, only to discover that Seiji and the boy who tore her ticket, named Hiroto, are actually members of SHIPS. Finally understanding the meaning of "different worlds" (Seiji is a popular idol while she is an average middle school student), Kirari refuses to give up. Filled with determination to be with Seiji, she declares that she will also become an idol. (Source: Wikipedia)
User Count1733
Favorites Count11
Start Date7th Apr 2006
Next ReleaseInvalid date
Popularity Rank3761
Rating Rank7256
Age RatingPG
Age Rating GuideTeens 13 or older
SubtypeTV
Statusfinished

Kirari Tsukishima is a 14-year old junior high student who has a passion for eating. When she saved a turtle stuck in a tree, its owner,Seiji Hiwatari, gave Kirari a ticket to a SHIPS concert. She tries to get in and there are too many people in front so she goes in the staff entrance. She is met by a young man who gets hostile when she mentions Seiji's name. He rips up her ticket and she runs away. She ends up in the vent over the stage where she sees Seiji and the young man from earlier singing on stage. She falls onto the stage and sets off a cloud of white feathers. Kirari decides to become an Idol.

Kirari attempts to figure out ways to become an idol. Because her ideas are ridiculous, her friends Miyu and Sayaka show an article that SHIPS is holding an audition to find the next idol. Kirari rushes to the place and surprisingly figures out that this audition is for guys. She disguises herself as a male and enters the audition. Although Kirari's identity was discovered, her confidence and persistence allowed her to become an idol.

Aaah! Aim for a Commercial Debut!!

Kirari must compete with Ogura Erina in a cake commercial. The girl whose commercial appeals to the staff the most will be able to debut. Of course, Erina secretly tries to make Kirari lose.

Shock! Papa is Against It!?

Muranishi assigns Kirari a manager: Kasumi Kumoi. Before Kirari can progress as an idol, Kumoi asks for permission from Kirari's father to become an idol. To Kirari's dismay, her father turns her down. Kirari attempts to find many ways to convince her father to pursue a career in the entertainment world but fails. Seeing Kirari petitioning to become an idol on his way home, Kirari's father decides to approve her request.

That can't be! The first job!!

Director Nezumi chooses Kirari's first job as an idol. Secretly, Erina switches the job to a more ridiculous and difficult task, helper to a group of amateur entertainers. Erina makes the task harder by telling whining and making direct lies at Tomy, the person who runs Kirari's 1st job location. Tomy, originally unsatisfied with Kirari trying to take his place during his shows, finally accepts her.

Boee~! Challenge to a song!!

An influential CD producer has his eyes set on Kirari and even decides to debut her CD, but Kirari can't sing. Her destructive singing voice causes her to be kicked out by every CD producer. Na-san, with some background on singing, teaches her how to become a better singer. With a slim chance of Kirari ever debuting her first CD, Seiji finds a perfect method for Kirari's singing debut.

Oh no! Live at first stage!!

Kirari performs live on TV with SHIPS for the first time! Erina, trying to take place of Kirari, kidnaps Na-san with taiyaki and ships Na-san into a zoo far away. With the live show about to begin, Kirari desperately searches for Na-san. As the show runs late, Erina convinces the producers to let her perform. Instead, SHIPS will take place until Kirari arrives. Na-san finds his/her route back and reunites with Kirari just in time for the live show.

During Kirari's latest shooting, a mysterious magician attacks Kirari and SHIPS with a variety of magic tricks and sea creatures. The magician reveals himself as Arashi. He convinces Kirari to quit her idol work and fulfill the promise they made when they were in their childhood. Surprisingly, Kirari has no memory of such events.

As Kirari becomes more recognized by people in the entertainment world, going to school becomes more challenging as the media and her fans would crowd around her. Muranishi assigns Kirari a new school for idols that SHIPS attends. Erina, also in her new class, tries to make Kirari's first day a nightmare. Erina, however, only makes her recognition more positive.

Kirarin Revolution is about a young girl called Kirari who becomes an idol because she wants to follow her crush, Seiji. However, as the story progresses, she wants to be an idol for more than that reason.Story:I gave the story a 4 because it doesn't develop much and far too many of the episodes are fillers. I can understand that the writers would find it hard to keep up a decent storyline for over 100 episodes, but still.. in each episode an event happens that would usually take a quarter of an episode in most other series, hence making the series feel very dragged out.It is aimed for younger girls who want to be an idol like Kirari, and that is probably why the lack of a decent story annoys me. Art:The art is fair enough. It isn't bad, but it isn't outstanding either. Kirari always manages to look pretty and cute, but that's as far as it goes. All the other characters and backgrounds look fairly plain in comparison to Kirari.Sound:The music is catchy, up-beat and cute, just how it's meant to be. The first opening theme and the second ending theme are delightful to listen to and have very cute lyrics; I even have the second ending on my ipod ^^. The background music is a little repetitive, but not so much that it bothers the viewer.Character:Aside from Kirari, none of the characters stand out as they are all pretty standard - Seiji is dense and naive, Hiroto is a tsundere, Erina is a spoilt brat and similar to Luna from Seto no Hanayome, and so on. Also, none have had any development yet, which pushes my score down. Everyone seems to just be there to push the story along.Enjoyment:Yes, even though I've just been complaining about the series, I gave this section a 8/10, simply because I always know I can relax when watching this series without becoming bored stiff. It's a lovely way to relax after having a hard day, and the language is quite easy so I can paint my nails without reading the subtitles sometimes ^^; haha.Overall:Overall, I thought that Kirarin Revolution deserved a 7/10. OK, it's not for everyone, but if you're like me and just want to find a nice and easy-going series about a cute idol, then I recommend it ^^

Kirarin Revolution is a fun anime but is al little bit to long in the middle and the romance doesn't really finisch it's stil a questionmark. But is really funny.

The epitome of overrated shoujo, yet I couldn't stop watching. Watch this garbage, let your soul be sucked in like mine was.

Start a new discussion for Kirarin☆Revolution anime. Please be fair to others, for the full rules do refer to the Discussion Rules page.