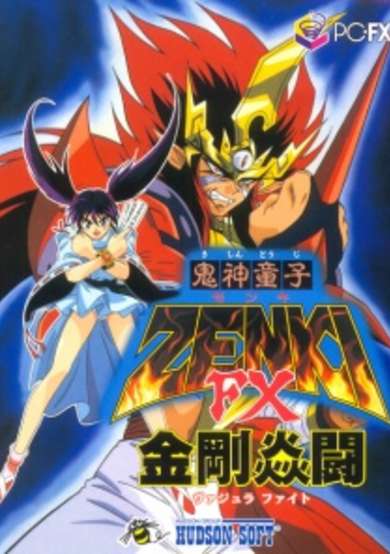 In ancient times, a great battle was waged between a master mage, Enno Ozuno, and an evil demon goddess, Karuma. Unfortunately, Enno didn't have the strength to defeat her alone and was forced to call upon Zenki, a powerful protector demon. After Karuma was defeated, Enno sealed Zenki away in a pillar located inside his temple. 1,200 years after this epic battle, Enno's descendant, Chiaki, spends her days showing tourists around her hometown of Shikigami-cho and doing exorcisms to pay the bills. One day, two thieves enter the town in hopes of opening a seal in the Ozuno temple and releasing the hidden treasure from within. However, what actually pops out is a dark entity that attaches itself to the henchmen, transforming them into demonic beings. After this transformation, they begin a rampage through the temple, terrorizing poor Chiaki. It is now up to this young progeny to unleash her family's powers to summon Zenki and save Shikigami-cho from these demons, as well as the evil entities sure to follow in their footsteps.
User Count863
Favorites Count1
Start Date9th Jan 1995
Next ReleaseInvalid date
Popularity Rank5088
Rating Rank5879
Age RatingPG
Age Rating GuideTeens 13 or older
SubtypeTV
Statusfinished

An unknown force of great evil is on the move awakening the seeds of possession which have been scattered throughout the world. Once awakened, the seeds bring forth a great monster capable of much chaos and destruction. Enno Chiaki is the 55th generation child of Enno Ozunu - a great mage who lived in Shikigami-cho 1200 years past, who lives at the family shrine making ends meet by doing exorcisms and showing people about town. The family shrine however also holds the seal to one of the seeds of possession. Two of Karma's minions travel to Shikigami-cho in order to release the seal on the seed. Chiaki faced with a possession beast needs help and fast, if only she could break the seal holding Zenki - the family's protector demon and summon him forth.

Karuma the demon and her three demon disciples

Guren Find a Karuma Seed ,Meanwhile Kurabashy Thinks in he's Fellings for Chiaky When The seed that Guren Find attack Him in The Form Of a Spider ,Kurabashy is Contaminaded by the Karuma Seed and he becomes into the Voydoo Demon, Kidnapinng Chiaky,Then Zenki appears and save Her....

Shut in by the shutter

This Chapter starts when Anju find a Karuma Seed in a Abandoned House, Meanwhile Zenki and Chiaky Fight Because Zenki see her changing Close, Later In School Somebody is looking in the Girl's Dresser and Taking Pictures, Chiaky Believes that is Zenki , just To Find Out that Is A Teacher posses By The Karuma Seed that Anju Find, making him into The Dakki Demon..

The pot filled with desire

This Episode Starts When Bonze Jukai Go to Buy The Legendary ""Pot Of desires"" Just To Find Out That The Pot Has Been Sold,Zenki Feels The Scent of a Karuma Seed (This One was inside of the Pot) The person Who Buy It Finds The Karuma Seed and he is Possessed Whit The ability of become Things In Gold ,When Bonze Jukai Find The Pot , He take it Of the Buyer Then the Buyer became the Jacongo Demon

Zenki Fights Whit Chiaky Because She Puts Locks On the Fridge , so that Way Zenki doesn't Eat To Much, Zenki go to eat at Chiaky schools just to find out that the principal also steals the food of the cafeteria, The principal reveals that he is possessed whit a Karuma seed and become the Icawoo Demon , Who Try to eat the people , just then Zenki think that he will be free throwin Chiaky to The mouth Of Icawoo , But Chiaky call him and both gets trapped in his stomach

The boy and the telephone

This Episode Shows the Live of a Young Kid , Hiroshi , who doesn't have any friends and try to get some on the phone, His telephone rings and when he pick up , a Karuma seed Possessed Him,Hiroshi is Missing and the temple people is helping to find him ,when Zenki and Chiaky find out where he is , Anju tell this to Hiroshi who Became an Teledead Demon, Zenki destroy Him but Hiroshi dies to because he was too infected by the Seed, at the end Hiroshi call His Mom from the other world and tell her that now he has many friends.

Run for the finish line of desire

Ako's Boyfriend, Shun appears in this episode in preparation for a race, But his trainer give him a Karuma Seed , this seed give him the ability of speed but for more he run, he couldn't find a goal, soon appears in the city the mystery of the running Shadow in the night,ako is worried and tell Chiaky Who Tell Zenki .After that Zenki Find out what is happening whit shun, the trainer of Shun (Gowla) become Shun into the Guaraney demon , who is finally beat by Zenki , and return to normal in his relationship whit Ako.

Karma is Fighting Whit Guren,Gowla And Anju because they don't do they work well, And She Tell them that their mission is not fight whit Zenki,is only open manny Seed as they Can, So Guren take the next Mission. In other place Chiaky and Friends go to an Hotel ,Which One is free for Woman.. Soon they discovers that woman's at the Hotel are getting Mummified,They Tell this to the owner Of the Hotel,But her Don't give them much attention (she was possess by the seed), After littles Mollusk appears they Became into a strange Demon Who Fight Whit Zenki But Is Killed By Chiaky and An Strange Helper (Shoma Maki)Then Guren appears and start To Fight Whit Zenki, and after use their Powers a Big Explosion happens..

A demon in the basement and the fire spell

The Smoke of the explosion Clears..just to Show that Guren is intact The Fight continue but Guren return Zenki to his Kid Form, in that moment anju appears and tells Guren that Karma is calling ,the strange man tell Anju if her remember him but anju throws an indirect,the men say he is Shoma Maki, but Anju and Guren disappear, the Group go to the interior of the Hotel and find Nami Mummified , this start a fight between Zenki and Chiaky when zenki tell Chiaky that ""don't waste time crying"" Chiaky give him the Brazalet...

A boy and his dogs

Chiaky meets the young boy Yutaka who teach dogs, and showing Chiaky a trick of his dog Futai, The dog find a Karuma seed and eat it without notice, the seed will later be removed by Yutaka who will be possessed whit his dogs and all of them became the ""Killer Root"" demon ,meanwhile zenki is battling whit Gowla in the temple. After zenki go to help thanks to Chiaky Magic and when a Storm begins the dogs starts to try escape of the monster body.

Start a new discussion for Kishin Douji Zenki anime. Please be fair to others, for the full rules do refer to the Discussion Rules page.