An accident in the bakery's oven caused a piece of bread to stay in the oven for way too long. Thus Kogepan was born - a piece of burnt bread, having no chance to be sold. (Source: ANN) 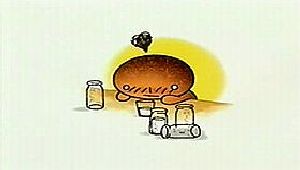 A Day in the life of Kogepan

A brief introduction to Kogepan 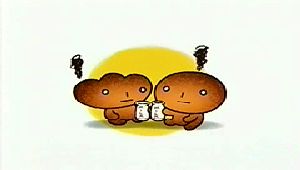 Kogepan meets another bread of similar burnt fate. They travel together. 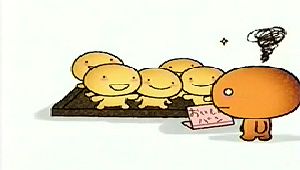 Kogepan and the young pretty breads

What NOT to say to young bread. 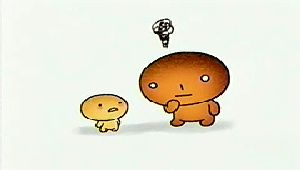 Kogepan's Friends at the bakery

A look at Kogepan's friends at the bakery. 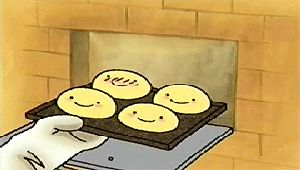 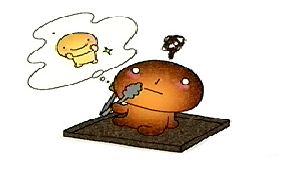 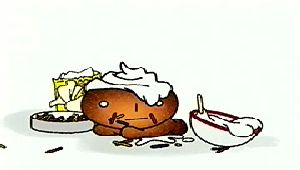 The attitude of Kogepan and his ongoing quest for perfection. 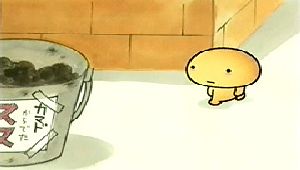 A Pretty Pan takes a liking to Kogepan, but it was not to be. 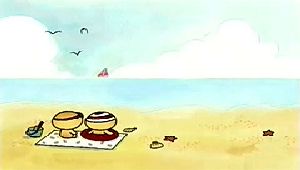 Spring is here! Followed swiftly by Summer, Autumn and Winter!

Kogepan is the tale of a burnt piece of bread going through an existential crisis because nobody wants to buy him. It's all of half an hour long, with each episode being 4 minutes long, much like Fireball. It came recommended from 2 different people, and when two completely different people with no connection to each other and totally different tastes recommend an animation short aimed at children from over 10 years ago, you should probably pay attention. That's assuming Kogepan is aimed at children, which I find hard to believe since the DEEP THEMES of Kogepan will fly straight over the head. You see, Kogepan is all a metaphor for old age.Japan has a culture of fetishising youth to the point that a woman is considered old and past it once they reach the age of around 30. Not that this is solely a trait of Japan or anything, but the concept is definitely more prevalent there. If you're old, nobody wants you anymore. You are, as Kogepan would put it, a burnt piece of bread. Nobody in the shop wants to buy you anymore, something poor old Kogepan gets supremely jealous about.This really isn't a stretch of metaphorical analysis here. The freshly baked breads have squeaky young voices and are described as being young and full of energy and innocence. Meanwhile Kogepan trudges about the shop with a forlorn look on his face. He tries occasionally to make himself look more like the younger breads. He works out, goes jogging, takes baths in milk so his skin looks more fresh. He even at one point tries to slather himself in ridiculous looking makeup (aka icing and sprinkles) after he sees some of the younger breads doing it. That is, until his friend and fellow piece of burnt bread Creampan walks in on him. Imagine you just walked in on your 50-year-old mate slathering himself in fake tan and trying on ladies underwear and you'd have a rough idea of what Creampan's reaction was.Ironically, but importantly, all the young beautifully baked breads admire Kogepan. While he may get angry when they jump about with their seemingly unlimited energy, stopping to lecture them about good bread behaviour, the young breads all stop and listen to him. They have huge respect for Kogepan, because behind his crusty (har har) old man behaviour, he genuinely cares about the breads and tries to help them get sold. Also he gives them alcohol (aka milk) and we all know there's no better way to get on a young person's side then provide them with alcohol.It gets to the point where one of the younger breads, in wide-eyed young love, completely falls for Kogepan and tries to be just like him. She covers herself in soot and tries to blend in with the other burnt breads, but just ends up coughing and spluttering and getting soot in her eyes. Kogepan, who had been in grumpy old man mode for the rest of that day because he was chasing away cockroaches that had gotten in to the shop, just helped clean her up and give a soft lecture on finding your own dreams. The next day, she's happily sold and Kogepan looks on proudly, and yet a bit sadly as another bird leaves the nest.I really wish there had been more episodes, because every episode managed to introduce something new and interesting to the Kogepan world. I loved the charcoal bread character, who had spent over 3 hours in the oven. Even the other regular burnt breads look up to him in awe. He is basically a war veteran, speaking of his time deep in the oven and how conspiracy theories were flying around down there. Also while Kogepan sticks to his milk, Charcol bread is hardcore and drinks hard liquor (aka coffee milk).Strawberry bread is pretty great too. She's the New Hot Thing in Town, which gets Kogepan particularly pissed off because he thinks she's just getting by on gimmicks, doncha know bread is a staple of the family, people don't buy it for its looks etc. He actually uses the line "kids these days", which rather upsets poor little strawberry bread, who puts up a strong and heartfelt defence of her strawberry filling. Kogepan finally sees that, behind the popularity, Strawberry Bread is a bread who works hard to reach where she is, and is actually kinda lonely because she's always sold so quickly she never gets a chance to make friends.Then Kogepan gets her drunk and I'm pretty sure sleeps with her......but let's not make this review weird.Back to the old age metaphor, while Kogepan might not be considered attractive material to be purchased in this day and age, he has fellow Kogepan friends and all the young breads look up to his experience. On the occasions Kogepan breaks out of his not-so-secret wish to be purchased just like all the younger breads, he can see that he lives a truly happy life in his own right.Basically Kogepan is fucking great and you should watch it.

Start a new discussion for Kogepan anime. Please be fair to others, for the full rules do refer to the Discussion Rules page.