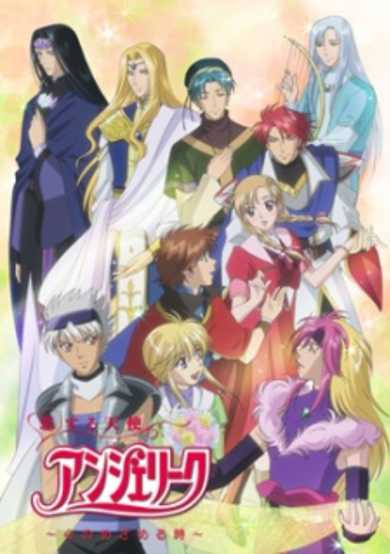 A young girl named Ange is summoned to a Sacred Land and is chosen as the Legendary Etoile, whose mission is to save the newly-born Cosmos of the Holy Beast, which has recently fallen under a crisis. With the support of nine Guardians (who have the power of nine elements), she embarks on a journey to save the dying land of the Holy Beast and to discover her true self. (Source: ANN)
User Count743
Favorites Count2
Start Date8th Jul 2006
Next ReleaseInvalid date
Popularity Rank5394
Rating Rank4719
Age RatingPG
Age Rating GuideTeens 13 or older
SubtypeTV
Statusfinished

The story opens with the Queen of the Shinchou universe conversing with the Queen of the Seijuu universe, and the Seijuu Queen mentioning her stars breaking. Concerned, she has her assistant, Rosalia, call her nine Guardians together. After the Queen explains the situation, Luva, the Guardian of Earth, takes the other Guardians, the Queen, and Rosalia to a sacred stone of prophecy, where he reveals that there is a prophecy about one who will come to the Holy Land and shine like an angel. Soon after, a ship carrying a group of young girls arrives to the Holy Land, one of them destined be the Legendary Etoile. Ernst briefs the Guardians as the girls arrive, one among them dressed like a boy with glasses. The other girls snub her as interviews begin. Zephel, the Guardian of Steel, hides in the forest to avoid participating and encounters the odd girl in question, saving her from falling and revealing her to be extremely beautiful. The girl pushes him away and runs away with her bags as the Guardians are discussing that they have not found the girl with that special shine. It is revealed the girl, named Ange, declined her interview, believing herself not to be suitable to be the Legendary Etoile. She ends up at the stone that Luva showed the Guardians, and her memories are shown. As the Guardians arrive, it is revealed Ange is the Legendary Etoile.

First Time In The Sacred Land

Ange wakes up in a bedroom after the previous day's events. After Rosalia comes and tells her she is to meet the Queen, Ange dresses in her old clothes and meets some of the other Guardians, including Randy, Marcel, and Lumiale. Olivie, the Guardian of Dreams, then comes and whisks her away and gives her a makeover. Ange runs away as the Guardians observe her, only to run into the Guardian of Fire, Oscar, and is whisked away by him to a nearby village festival. Oscar scolds her for not dancing, and Ange responds by performing a folk dance. Later, Oscar chides her for not wanting to be the Etoile, and encourages her to find her own eternal galaxy. Ange prepares to run away, but shows up in the throne room instead and asks what her mission is as the Queen arrives.

The Queen arrives and tells Ange of the Sacrea and the Guardians, and which Sacrea they represent (Julious, light and pride; Clavis, darkness and tranquility; Randy, wind and courage; Lumiale, water and kindnesss; Oscar, fire and strength; Marcel, greenery and abundance; Zephel, steel and ingenuity; Olivie, beauty and dreams; and Luva, knowledge and earth). The Queen then reveals to Ange the fate of the Seijuu galaxy, and states that her mission is to awaken the Queen of the Seijuu universe from her slumber. Ange initially is unsure, but decides to help. Julious bestows on her the Sacrea of Light, which causes Ange to faint. She rests, then Luva comes, and takes Ange and tells her the story of how he became a Guardian, and also of the Queen and Rosalia. Ange then reacts to the Sacrea of Light, and Julious and Luva take her to the Seijuu galaxy, where Ange releases the Sacrea over the land, allowing things to thaw a little.

Ange goes around to collect Sacrea from the Guardians. Upon approaching Olivie, he expresses concern for her, but Ange insists she is fine. After gathering Sacrea from Marcel, Ange and Zephel encounter each other and exchange few words before Ange goes to the Seijuu universe. Once there she releases the Sacrea, but a projection of the future shows a problem with the balance of Sacrea. Ange is horrified and wishes to remedy the situation by herself, but Zephel scolds her for not asking for help. Ernst reveals that the Sacreas need to balance out, and Marcel and Randy give her Sacrea. The three of them, along with Zephel, journey to the Seijuu universe, where the Sacrea is released into the land.

A Day Off in the Sacred Land

The Spring of Life

The Door of Ice

this anime has great plot and back round story, and the characters are  very interesting. I really enjoyed the anime. 8 out of 9

Start a new discussion for Koisuru Tenshi Angelique: Kokoro no Mezameru Toki anime. Please be fair to others, for the full rules do refer to the Discussion Rules page.