High school student Takeru Takemoto works part time as a (motor)bike courier. During one of his deliveries, he saw a mysterious light passing him and fell into a forest. What he had found was a beautiful girl coming out from a glowing cocoon, calling herself "Hikari." While Takeru was quite embarrassed because of Hikari's nudity, a strange monster suddenly showed up and immediately attacked the two. Both Takeru and Hikari demonstrated the power of their other selves before Takeru had a clue of what's going on. (Source: ANN) 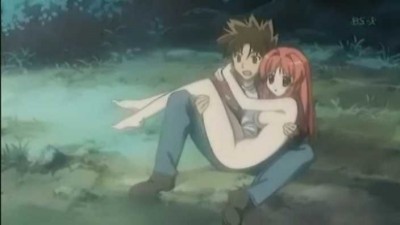 Dawn Is the Separation Between Light and Darkness

Takeru has been telling Ryou what ideal woman would be like, when suddenly a bright light zooms down out of the sky, hits a tree, and BAM! Who should appear in the tree but Takeru's ideal woman, naked as a jaybird? She seems very vulnerable and scared and obviously doesn't know the basics of human customs or even speech. Takeru gives her a name and vows to protect her. 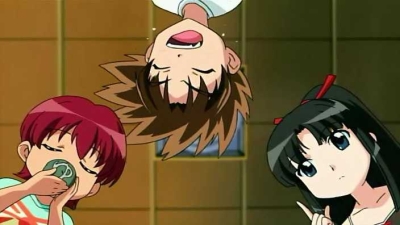 You Are My First

Takeru and Hikari explain to his friends and family what happened the previous night. Hikari tells them she came to Earth from outer space because she was lonely, but doesn't know anything else about herself. However, because Takeru saved her he's now very precious to her. Takeru's male classmates go wild with jealousy because he's got a cute babe now. 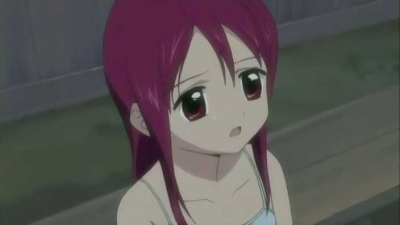 Ryou is waiting to meet someone, although he himself doesn't really know this until he meets her. Her name is Akari, and she is obviously similar to Hikari in that she doesn't remember her past or have a name. Akari is living in the forest, because she remembers being there when she saw a night where there was a very bright light, and she wants to see a night like that again. Ryou begins going to see her regularly on his walks home, and begins to feel very protective towards her. 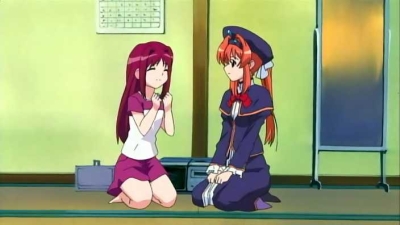 Life from This Point On

Ryou takes Akari home with him and soon his little sister Kimi starts to grow fond of Akari in spite of herself, and the three wind up declaring themselves a family, after which Akari moves into the Ninomiya household. Akari is introduced to Hikari and learns that she too came from space. Jennifer suggests that they used to be one being with no body, and then divided into two and gained bodies after they got to Earth. Hikaru thinks it will be enjoyable to go to school with Takeru so she begins school with him. Soon she finds out that it is really boring. 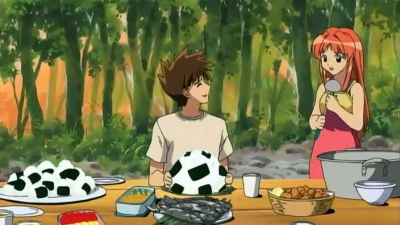 Standing by the Waterside

It's summer break, and they all go to the mountains to camp. Hikari and Akari learn about nature and are happy; Ioneous and Jennifer get drunk, and are also happy. The group decides to play a game in the dark where they're basically supposed to split up into pairs and stake a flag on a rock. Hikari and Takeru wind up together and the rest of the group has fun spying on them, until Ioneous in monster-form starts running around in a drunken fit, making them think they're being attacked. 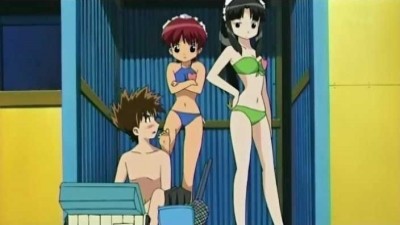 Prelude to a Kiss

After the mountains, everyone heads to the beach. They all pitch in to help Takeru's aunt and uncle's beach restaurant. With Hikari making so many mistakes, she and Takeru are allowed to take off. They are attacked by a huge water dragon like thing and Takeru turns into his suped up form to save her. It is the time for the Festival of Lanterns where Japanese people honor their dead. Hikari wonders about death and it's reality is presented to her when a cricket she's been keeping dies. Jennifer reports on the ED (Extended Definition) phenomena to her superiors. They wonder about what is to happen with a new extinction on the way, something that's happened seven times before in Earth's history. Hikari is plagued by dreams in which her "dark" half wonders why she's fraternizing with those she's to destroy. Wishing Upon a Star

Takeru gets a fixer upper bike and spends most of his time working on it. Hikari feels left out and Mari takes the whole gang to a junk yard to find parts for the motorcycle. At the junk yard Akari confronts Hikari about their roles on Earth while Ryou and Takeru talk about their new found powers in the garage. 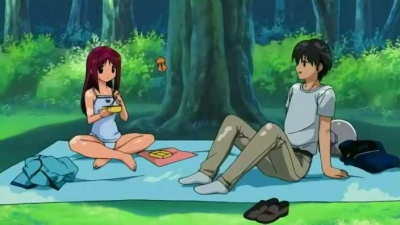 Mari buys a present for Takeru and is going to tell him her feelings for him. When she get to the garage, she sees Takeru about to kiss Hikari. She gets mad at Hikari and slaps her which triggers the destroyer in her. Now things are set in motion for the Earth to be cleansed for the next wave of evolution.

I remember browsing through my usual anime site when I came across this show, and the thought "This ugly yet beautiful world? That's a stupid name for a show, why would anyone name a show that?" So naturally I skipped it and looked at the show directly above it, and after somehow thinking the name The World God Only Knows was a better title I decided to watch that instead. A couple of years later I actually decided to watch this show, and it was pretty decent. Personally I would have to say this show does a lot of little things to impress me, like those little anime quirks you never even think about or are completely fed up with being the same thing in every show. For example \*SPOILER mid way though the show the school kind of blows up and is no longer usable, and instead of pulling some "oh well we fixed it in one episode because its anime" bullshit we usually see, the principal declares summer early due to the destruction. \*SPOILER Its a nice change to see something outrageous happen in anime and actually have consequences vs traditional anime bullshit. Another nice change is \*SPOILER how MC changes into Shadow the Hedgehog to fight off giant.....dinosaur....bug....demon....things, instead of being useless and leaving the fighting to the main gril because he is too weak or some other crap \*SPOILER I guess? They kind of explain it, but not really, at least in a way that make enough sense.  With that lets get to the next big thing, what this show doesn't do right. Even though the little things are handled differently than other shows, a lot of the plot and characters aren't. Pretty much every character is wonder bread generic and done to death, but that’s not to say I hated every last one of them. Hikari is fine but her voice kind of grates on my nerves (and I can't imagine the sub being much better). MC is ok, he is a few steps above typical MC we see in other shows but he is fine for anime standards. Akari was great, just some of things she said were classic and made me feel like she was genuinely confused or was just fucking with the best friend. Speaking of him, eh, he's fine, no complaints. By far the best one was the alcohol poisoned, big boobed, half naked, American scientist Jennifer, who actually explains \*SPOILER things about the dinosaur, bug, demon things which is nice to finally hear, but her explanation only works until you realize that it probably doesn't make any sense. Her interaction with Hikari's robot Ioneos is quite funny and enjoyable to watch, why Hikari has a robot WHO CARES ITS ANIME WE CAN DO WHAT EVER WE WANT! \*SPOILER Everyone else, ugh bad isn't the right word to explain them. Like I said generic is a better way to say it, all of the friends and the parents are literally wonder bread. You got the pervy group of guys who are jealous of MC because Hikari like him, the gal pals who try to help Hikari to  fit in and joke amongst themselves, and last but least the tsundere best childhood friend who secretly likes MC, OH Yeh \*SPOILER. If you can look past the characters and what I guess you could call a plot, and focus on the little things this show can be quite enjoyable, or slow depending on who you’re asking. Despite the low rating it will end up with, I did truly enjoy the show. I am the kind of person who can sit through boredom in order to get to the good stuff (for shit sakes I got through Kashimashi, and that had no excitement at the end), but if you have a low tolerance for shitty characters and slow pacing, then maybe don't watch this one. On the other hand if you like the little things in anime that most shows overlook and can understand what I think is the plot, then I would recommend you check out.

Start a new discussion for Kono Minikuku mo Utsukushii Sekai anime. Please be fair to others, for the full rules do refer to the Discussion Rules page.