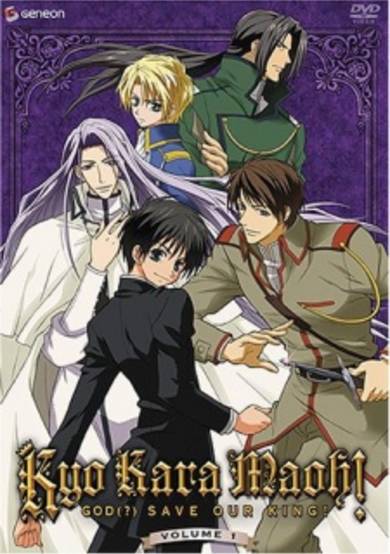 Kyou kara Maou! revolves around Yuri Shibuya, your average Japanese teenager. One day, Yuri sees a classmate being harassed by bullies. Thanks to this intervention, his friend is able to escape, but unfortunately Yuri becomes the new target of the bullies in the process and gets his head shoved into a toilet. But instead of water, the toilet contains a swirling portal that sucks him into another world, largely resembling medieval Europe. There, he is told that he will become the next Demon King due to his black hair and black eyes, traits only possessed by the demon's royal lineage. Yuri's arrival is met with some skepticism by some of the demons, who view him as unworthy to be their king. However, after Yuri wins a duel by utilizing his magical powers, the demons slowly begin to acknowledge him as their monarch. Yuri must now learn what it takes be a true Demon King, as he tries to keep the peace between demons and humans in this strange new realm.
User Count6448
Favorites Count87
Start Date3rd Apr 2004
Next ReleaseInvalid date
Popularity Rank1713
Rating Rank1704
Age RatingPG
Age Rating GuideTeens 13 or older
SubtypeTV
Statusfinished

Flushed Into an Alternate World!

Yuuri Shibuya was just a normal Japanese high school kid who likes baseball and had a strong sense of justice until one day on his way home from school he sees a former classmate of his, Murata, being bullied. He steps in to try and stop the bullies but they just grab him instead and dunk his head in a toilet in the girl's bathroom. But for some reason, when his head enters the water, Yuuri is sucked into the toilet and ends up in another world. When he wakes in an unfamiliar area, he initially assumes that he is at a theme park because of the medieval-style clothes the people are wearing. He tries to talk to the villagers but they attack him. Adalbert von Grantz rides up on a horse and saves him from the villagers and uses some form of magic to unlock the local language hidden in Yuuri's soul. Conrad Weller then rides up and after a short fight Adalbert runs away. Conrad takes Yuuri to a small village where he meets Gunter von Christ who tells him that he is the new king the Demon Kingdom. They then take Yuuri to the castle where he meets Wolfram von Bielefelt and Gwendal von Voltaire, Conrad's two half brothers (who do not look anything alike!).

While attending a dinner party that the former Queen is holding, Wolfram insults Yuuri's mother by saying she is dirty human and Yuuri reacts to the insult by slapping Wolfram across the left cheek. From everyone's weird reaction to the slap he finds out that this is actually how the nobles of the Demon Kingdom propose. Wolfram then throws his silverware on the floor to challenge Yuuri to a duel to contest the engagement and Yuuri unknowingly accepts by picking up a knife. Yuuri is allowed to choose how they fight the duel and so he decides they should fight through a sumo match. Yuuri wins the match but Wolfram finds this type of fight unfair so he challenges Yuuri to a sword fight. Yuuri manages to win the sword fight also but Wolfram becomes angry and attacks him with magic. Even though no one thinks Yuuri has any magic yet Yuuri seems to transform and summons two water dragons to hold Wolfram back. Seeing the power that Yuuri has, Wolfram finally accepts defeat and accepts Yuuri as the rightful king.

Yuuri Shibuya! I AM the Demon King!

When Yuuri wakes up after his first time using magic he finds out from Wolfram that Conrad and Gwendal have gone off to protect a human refugee village that is being attacked. Yuuri convinces Wolfram to take him out to help. On the way they run into Adalbert who tells Yuuri that it is humans that are attacking the town so it is a fight between humans. He tries to convince Yuuri to come with him and leave the demons but Yuuri decides he is going to help the demons. Yuuri decides to become the demon king and when they return to the capital they hold a coronation ceremony. To complete the ceremony he has to stick his hand in a waterfall but when he does he gets sucked back to Earth.

What's Next? The Ultimate Weapon!?

Yuuri awakens to finds himself in the girl's bathroom he originally disappeared from with Ken Murata in front of him with a police officer. Yuuri decides to continue his interests in baseball by starting his own baseball team. While Yuuri is at a baseball game, his mother, Miko, reminiscences about the past. After the game, Yuuri is sucked back to the other world, where he finds out that some humans are threatening to start a war with them. Gunter and Gwendal think it's a good idea for Yuuri to hunt down the demon sword, Morgif, to make them so strong the humans will give up on wars.

Sailors and a Spoiled Brat

Yuuri, Conrad, and Wolfram set sail on a ship to Van da Via island where the demon sword, Morgif, is rumored to be located. On the ship there Yuuri meets a ships apprentice named Rick, a merchant named Heathcrife and his daughter Beatrice. That night a group of pirates board the ship they're on. Conrad hid Wolfram and Yuuri in a closet from the pirates but Yuuri makes a cat noise and gets them caught. Yuuri tries reason them that their actions are wrong, but when he sees one of the pirates dragging Beatrice he is angered and brings out his magic. He successfully repels the pirates with a monster made of the bones the humans have thrown on the ground. Conrad, Wolfram, and Yuuri are put in a cell but Jozak frees them and they escape in a boat.

The Terror of Morgif, a Man-Eating Demon Sword

Conrad, Wolfram, Yuuri, and Jozak reach the Van da Via island. At the inn they are staying at they learn about a legend of a cursed hot spring in the mountain and they decide Morgif is probably there so they decide to go investigate it. They find the sword at the bottom of the hot spring and Yuri attempts to grab it but it has a face and it bites him and so he runs away scared. They give up and return to the inn but later in the night he overhears a conversation between Jozak and Conrad and so Yuri goes back by himself to prove that he is worthy of being king and this time he successfully obtains the sword.

A humorous, fun and exciting anime to watch! Kyou Kara Maou is a cool story where the main character suddenly finds himself ruling the demon world. Through oppositions, opportunities, betrayals, and many more, the King will continue to grow and rule the land fairly, maintaining his human values and respecting the laws of the demon world. Good looking characters also play a part in engaging viewers.

Start a new discussion for Kyou kara Maou! anime. Please be fair to others, for the full rules do refer to the Discussion Rules page.