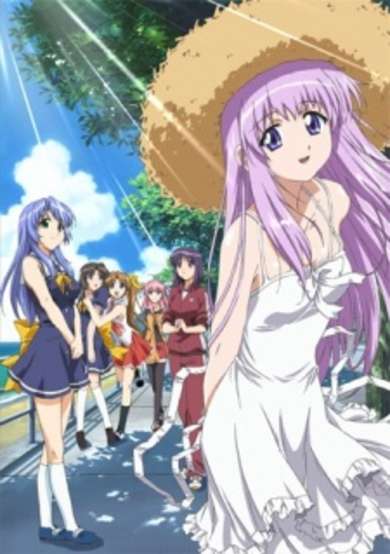 Lamune tells the story of a boy named Kenji and his childhood friend Nanami. Although, everyone seems to know that they have a relationship, neither are determined to push it anymore than close friends. The story goes through flashbacks, explaining why they are such close friends and any action doesn't seem to push them apart, but draw them closer. (Source: ANN)
User Count3071
Favorites Count6
Start Date11th Oct 2005
Next ReleaseInvalid date
Popularity Rank2777
Rating Rank6303
Age RatingPG
Age Rating GuideTeens 13 or older
SubtypeTV
Statusfinished

The Hermit Crab and the Straw Hat

When Kenji Tomosaka moved to a new coastal town, many years ago, he met a girl on the beach who is playing with some hermit crabs. She runs away crying after Kenji puts a crab on her head. When he gets back to his new home he finds out the girl is his next door neighbor and that his and her balcony are close enough he could jump from one to the other. In the present time Kenji wakes up after a strange dream then heads over to wake up Nanami Konoe. He finds her lying in the space between her bed and her wall and helps her out of it. Now begins the story of these two close childhood friends.

The Summer Field and the Nanami Special

Back when Kenji and Nanami were young, they played on the beach and had a lot of fun. Back in the now, a small conversation between Sakura and Kenji leaves Nanami angry at him, but they end up on good terms again, with some help from Nanami's mother. They then head to Nanami's field, and work a bit there whilst talking about the past.

In a flashback, we see the first time Nanami took Kenji to her field outside the town. Back in the now, Kenji's cousin Hikari is visiting; she is staying there during summer vacation. In the evening the very same day, Kenji, Nanami, Suzuka, Hikari and Hatano enjoy themselves with fireworks.

The School Council President and the Reward

This episode focuses mostly on Tae. She is taking care of her younger siblings, and has done so a long time, as revealed by a flashback. On top of that, she is also a member of the Student Council, and she is arranging a plan for cleaning up around the town. Most of the main cast volunteer for this, and they all enjoy a day of cleaning up around town.

The Starry Sky and a Telescope

When Suzuka and Kenji were kids, they tried to watch a meteor shower, but could not because of where they lived. They decided to make a promise to try and watch again after they moved. In the present, another meteor shower is coming up and Suzuka hears what seems to be Kenji wanting to break their promise.

When Kenji, Nanami, and Hikari were kids, they found an oyster with 2 pearls in it. It was decided that Hikari would keep the pearls since there were only two of them. Back in the present, Hikari has enrolled in Kenji's school, causing trouble for him. On top of that, she has begun diving more, but what is she looking for?

When Misora Ayukawa's bike breaks down, she ends up staying at Kenji's. Although he tries to fix her bike, he ends up making things worse and his father has to fix his screw ups. The next day, Kenji tries to help her find a part time job, but has very little success. Later Kenji tries to apologize to an upset Nanami.

The Bond Between the Two and Swaying Feelings

Kenji is asked by Tae to meet her alone after school, but when he goes to meet her, he finds Hiromi instead. Later Nanami asks Kenji what happened, but Kenji doesn't tell her anything. As the class goes on the their trip, Kenji ends up spending more time with Hiromi than Nanami.

The Distance Between the Two and a Lamune Bottle

When Hiromi and Kenji were kids, Kenji traded Hiromi a bottle of lamune for her blue hairpin. Before giving the bottle to her, Kenji took a drink from it, making it where he and Hiromi shared an indirect kiss. Ever since then Hiromi has cherished the bottle. What will she do when the bottle is broken?

The Folk Dance and Overlapping Hearts

Kenji and Nanami decide to go on a date around the town. Although they have a good time, the bike breaks down on them, stranding them at an inn. Deciding to break the awkwardness of having to share a room, Kenji and Nanami go down to the lake. There Nanami confesses her feelings for Kenji, but will Kenji accept them?

The story could be intersting (developpement of an childhood love) but the thing is very very very **simpleton** (Niais in french), we see some scene of when they were childs, its really embarrassing to watch... It looks like they don't have a functioning brain, when they're "adult" it's no better and Kenji looks a little dense, he doesn't weigh his words or actions...  Nanami Konoe is a little stupid and has an horrible voice, the visual aren't really great but the anime was made in 2005 so it's difficult to judge on this point... I like slices of life but I need something more dynamic and less simpleton otherwise I don't watch the thing and I do something else.  You can say "He/She is judging after watching only two episodes" but keep in mind that the first episode is **the decisive** episode. If it's unwatchable, the next eleven episodes have no value, I watched too much anime with a bad first episode and the next didn't make the thing better, it was a waste of time so now I prefer to stop the torture even if I'm missing something that is probably great.

Start a new discussion for Lamune anime. Please be fair to others, for the full rules do refer to the Discussion Rules page.