In the world of Prester, flight is the dominant mode of transportation, made possible by Claudia Fluid: a liquidized form of the crystals that are produced on the planet. An organization known solely as "the Guild" has absolute authority over the skies, with a monopoly on the engines that make use of this fluid. Moreover, as ecological disasters destabilize the warring countries of Anatoray and Disith, the Guild also arbitrates in the disputes between the two. Caught in the middle of the conflict are Sky Couriers, piloting small, two-person vanships that fly freely through the sky. Last Exile follows the adventures of two teenagers who dream of surpassing their parents: Claus Valca, son of a famous vanship pilot, and Lavie Head, Claus' best friend and navigator. Their job as couriers entails passing through an air current called the Grand Stream that separates the hostile nations, which even standard airships struggle to survive. However, when they take on a high-rated delivery to bring an orphan girl named Alvis Hamilton to the battleship Silvana, they get dragged into a much greater conflict that pits them against the might of the Guild. (Source: MAL Rewrite) 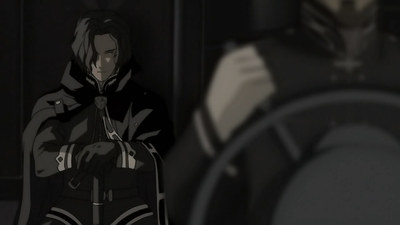 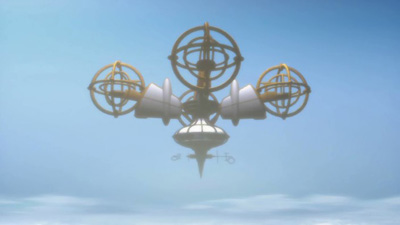 Just as Claus and Lavi deliver their message to Duke Madossein, The Guild is hit. Duke Madossein instructs everyone to get to safety, and Claus and Lavi are escorted to their vanship. However, just as they are about to leave, Claus remembers he still has his letter from Holy. Lavi rigs the PA system in order to read it to the Duke and everyone else on board. However, this could be cut short as the first officer send guard to stop Claus and Lavi. But the guards aren't the only ones heading for Claus and Lavi, as Mullin Shetland is touched by the words from the letter. 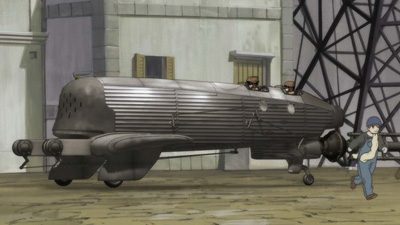 The race is on! Claus and Lavi enter in a race, that they've entered so many limes before. But this time is different. They hope to finish the race, and they almost do (in 1st place too), but they are hit by a renegade vanship delivering ""cargo"". They soon learn that the ""cargo"" is actually a little girl. Claus decided to take the mission and is told, by Ralph, not to run his engine because the people after the girl can detect it. Just as Claus and Lavi leave the enemy vanship approaches. Now Ralph must make the ultimate sacrifice so that Claus and Lavi can escape with the little girl. 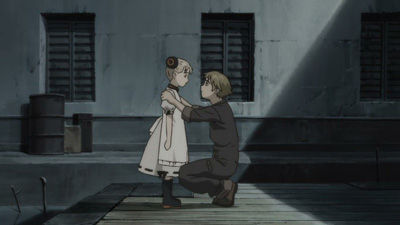 Claus and Lavi are back at their home, with Alvis sleeping on their bed. Claus has decided to take the mission, much to Lavi's annoyance. Alvis awakes and asks for her nanny, Gita but the woman died during their escape. Claus isn't sure how to handle it, but Lavi tells Al that Gita had to go away for a while. After eating, they settle in for the night, but the star-shaped ship finds Al in the house. Claus and Lavi have to escape, and their house is destroyed in the process. Although they don't use their engines in the waterway, the star-shaped ship still finds them. They narrowly escape, appearing to damage the star-shaped ship enough to do so. At the temple ruins, where they were to bring Al, they are attacked again and the star-shaped ship snatches Al. Claus tries to fight it with a rock and is knocked out. Just as he is about to be killed, a shot rings out. Alex has shot the pilot of the machine and saved all the children. 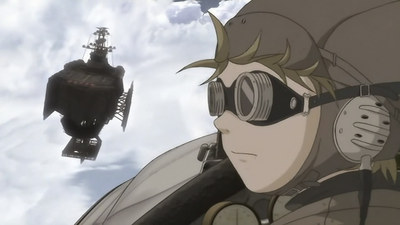 Alex kills the pilot of the star-shaped ship and takes Alvis on board the Sylvana, leaving Lavi and Claus behind. Claus repairs the vanship and obtains extra fuel from the downed ship nearby. He and Lavi then follow the trail of the Sylvana, for Al's sake. Al wakes up on the ship and meets Sophia. When the vanship catches up to the Sylvana, Alex allows the ship to fire upon them, but they are able to avoid getting hit and they ""crash-land"" on the Sylvana. They encounter mechanics in the hanger, and Claus is beaten up by one of them for fun. However, Tatiana and Alistia show up and Tatiana grudgingly asks for Claus' name. Lavi helps Claus up to the bridge, where they meet up with Alex again. At that point, Claus' injuries get the better of him, and he falls unconscious. 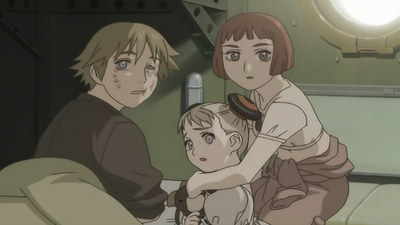 Dio and Luciora investigate their downed star-shaped machine. When Luciora fixes the camera on it, they are able to see an image of Alvis being protected by Claus. Tatiana and Alistia arrive at the palace of the emperor and inform him that the "cargo" is safely aboard the Sylvana. And speaking of the cargo, Al explores the ship on her own, making it down to the hangar, where the mechanics entertain her until Sophia retrieves her. Sophia brings her to Claus and Lavi, and later brings the still injured Claus to see Alex. Their talk is interrupted by a red alert claxon. The Guild is about to attack the Sylvana. In the course of the attack, one of the star-shaped machines comes aboard the ship and goes after Alvis. It's destroyed by one of the mechanics, and unfortunately ruins Claus and Lavi's vanship. Claus offers to fly and fight and the mechanics give him a quick review of combat flying. Another star-shaped machine comes on board, and the last scene is Claus, using his vanship, to shov 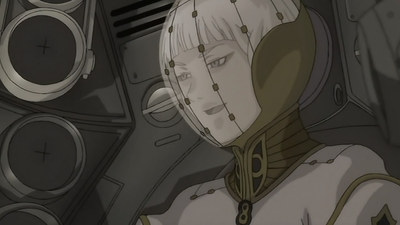 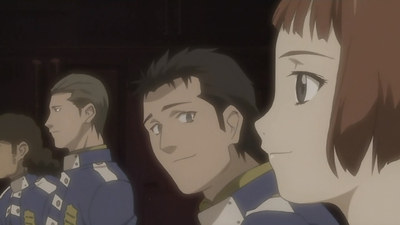 The Sylvana comes to Walker's Dock for some shore leave and refueling. While there, Lavi meets up with Moran Shetland again and the two share some water as they chat. The mechanics/technicians come on board and try to enjoy themselves, watching the bird races and gambling, but the nobles are not very friendly and rebuff them. At one point, Godwyn wants to start a fight at the insult, but his fellow mechanics urge him not to. However, when the officers use a flash camera to shock one of the racing birds into losing so that theirs wins, Lavi cannot take it and throws a chair on the table in front of one of the main commanders. Meanwhile, Claus wakes up at about 3 AM and discovers that while Al is sleeping in her bunk, Lavi is missing. He goes off in search of her and ends up in an elevator with Alistia. Because of the cramped quarters, they end up pretty close to each other and Claus shields her from the other men in the elevator. When they arrive, they find the entire room in a barro 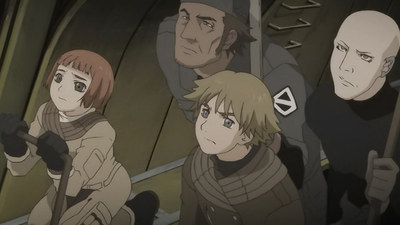 Moran is "officially" accepted by the crew of the Sylvana, albeit in a most interesting manner. Sophia presents the chance for Claus and Lavi to enter the 8-Hour Endurance Race at Horizon Cave. They accept the challenge, so long as the Sylvana mechanics will help them out. At the event, Al is allowed to "pick" the vanship that they must repair and fly for the race. Tatiana and Alistia, however, have a mission during the race. They need to hit a specific point in the race at a specific time. Tatiana expresses her dislike of "amateurs" i.e.: Claus and Lavi, but Alex shuts her up. Dio and Luciora show up, because Dio is with his sister, Daphne. Dio shows an interest in Claus, who doesn't return the fascination. Dio informs Claus that he is there to fly in the race with him. While the race is going on, Alex is at an auction to purchase something rare. It turns out to be an EXILE item, and Alex's opening bid on it, is 10,000,000 Claudia. This shocks the man sitting next to him, who just 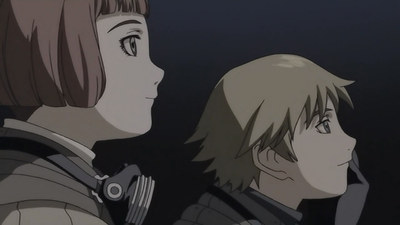 Claus and Lavie progress in the endurance race, but Dio and Lucciola continue to challenge them. Duke Henry Knowles raises the bid price on the Exile artifact, spurring interest among the other auction participants. As Alex attempts to outbid the others, Guild Maestro Delphine Eraclea challenges him and finally raises the bid price to 50 billion Claudia, at which point one of Knowles's men puts a gun at the back of Alex's head, threatening him not to continue bidding. On their final pit stop, Tatiana and Alister pick up a cargo of explosive charges for their mission. When the auction ends, Duke Knowles takes Alex outside and reveals that he wants to avenge the death of his son, captain of the Goliath. Claus and Lavie pull ahead of Dio and Lucciola in the final lap after only filling part of their fuel tank at the last pit stop to lighten the vanship and win the race. At precisely midnight, the explosive charges dropped by Tatiana and Alister destroy Horizon Cave's power generators, leaving it in darkness. Seizing the opportunity, Alex kills Knowles's men and escapes. When the artifact is taken to Delphine, it is discovered to be fake. The true artifact of Exile is revealed to be a Mysterion, one of four phrases with corresponding answers that will reveal the secret of Exile. Graf, the butler of House Hamilton, entrusts Alvis and the Mysterion to Alex. After the race, Lavie tells Claus that she does not want to fly in a fighter vanship but will continue to serve as his mechanic. Claus understands her decision and makes a promise that they will fly together again to cross the Grand Stream. Dio and Lucciola, who are able to see in the darkness, offer to tow Claus and Lavie out of Horizon Cave to the Silvana.

So... I finished Last Exile 10 minutes ago. First thing's first : the story. The action takes place in a steam-punk/SF world and the details in the show make the good use of these elements. In the first episodes you can see a lot of flying machines, strange clothes and all sorts of locations that characterize a steam-punk universe. All of this is very well represented with beautiful animation. Actually the animation is the best part about the series. Aerial battles are amazing and the vanships are very detailed. Unfortunately I only got to see this in 720p on a 17' monitor...but it must be a real eyegasm to see it on a big screen TV. I will do this sooner or later. Sound and characters... well this is where the bad things start to show up. I need to listen to the full OST but the opening theme is really good. There is a certain "fighting/dancing scene" where the music is memorable. Moving on to the characters... well some of them were great some were just to fill up the empty space. The only noticeable thing is the close relation between Claus and Lavie. Sophia is boring as hell, Alex is dull once you see that all his lines are in the same area and Mullin... well let's just say that he is one of the characters put in just to fill up the empty space. He has no actual value for the show.As usual, I keep the bad things for the end. First of all, the steam-punk theme was a great ideea and it was very well made. Why did they have to screw it up with the SF...? There are some huge holes in the plot and the fact that you only know detailed stuff only about Lavie and Claus does not help at all...In conclusion, I think that Last Exile was made more for the eye and less for the brain. If you can ignore the weak character design and weak story and just be able to be amazed of the beautiful animation and sound, than this is a five star anime. It's awesome. However... I can't do that. With all the stuff lacking I can only give it a 6.

Start a new discussion for Last Exile anime. Please be fair to others, for the full rules do refer to the Discussion Rules page.