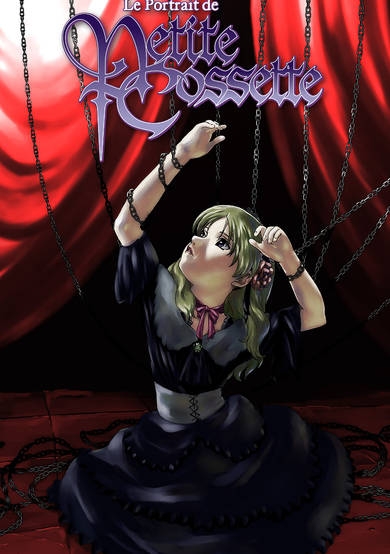 The anime is about art student Eiri Kurahashi, who works in an antique shop. One day, he sees the image of a girl in an antique glass. To his shock, she appears to be moving and living out her life before his eyes. He becomes infatuated with the girl, and one night at midnight, somehow makes contact with her. He learns her name is Cossette, and that she was an aristocrat's daughter during the 18th century. She reveals to him that her spirit has been entrapped within the glass by her murder, which was perpetrated by her betrothed, the artist Marcelo Orlando. To set her free, she tells Eiri, a man must be willing to take upon himself punishment for the sins Marcelo committed. (Source: Wikipedia)
User Count5116
Favorites Count20
Start Date11th Apr 2004
Next ReleaseInvalid date
Popularity Rank2004
Rating Rank6562
Age RatingR
Age Rating Guide17+ (violence & profanity)
SubtypeOVA
Statusfinished

**Watch trailer trailer here.** "For 250 years, i've been searching for someone, someone who can see me, some who would agree to the pact of blood...who would love me so much, that he'll forsake his dear life, is it you?" Since this anime is so so close to my heart, if i even try to write down it's review two things will happen: 1\. It'll be toooooo long, which might make most of the people to avoid reading it altogether, killing the purpose for posting it. 2\. It'll turn out to be tooo subjective. So i decided to write some basic points about it, while being as objective as i can :- 1\. This anime is more of a visual art, so if you think you feel bored with less dialogues then it won't suit your taste. 2\. The story isn't something "original" as per say, but it's presentation makes it a unique experience, not to forget that it remains very true to it's plot. 3\. This anime is a metaphoric piece about humans themselves and portrayed through an art piece and two artists with their conflicting perspectives about the "same art piece". 4\. There's little to none character development but by not explaining much about their emotions, behavioral pattern and intentions, it actually amazingly worked in this setting. Making it a piece that defines it's own genre. 5\. The art is amazing, simple gorgeous. The use of lighting feels lavish. 6\. The treatment of story does proper judgement with the genre and do well in portraying the mood of the scene. 7\. The music is by Yuki Kajiura and it's legendary. The range of melodies covering all the aspects and emotions of this show, is simply in few words "Hauntingly beautiful". Main Theme ---&gt; Moonflower ---&gt; 8\. You'll either love this show or simply hate it. There's no in-between statement. This show strikes highly on your own moralistic values and is simply has a highly subjective approach. The people who liked it, ended up loving it to the core and those who didn't liked it, hated it to the level of forgetting it completely. First of all this anime is not just underrated but highly un-watched too, but since the scale weighs more on underrated side, hence this review, but in the four years that I've been watching anime and chatting with hundreds of people. Only a very very few have seen it but those who have seen it are still struggling with their opinion about it, they define this anime as - **"it entices you, just like the devil"**. :) It has gripped my heart since the night i stumbled upon this masterpiece and still won't let go of my soul.

\[Old review is old.\] Made in 2004 by an anime studio called Daume (whose only other notable works include the Onegai series and Shiki), Le Portrait De Petit Cossette is one of the earlier works by now famed director Akiyuki Shinbo. It ended up being an easy substitute definition for too much style, not enough substance, but just because the OVA is oversaturated with his visual antics doesn’t mean it’s a disaster. Infact this short series might hold a couple surprises, at least for those patient enough to sit through it. The OVA follows a boy named Eiri, an artist working at an antique shop in the city. One day he stumbles upon a set of old wine glasses and finds out that they’re inhabited by a spirit. Said spirit is Petit Cossette herself, as she unfolds the woes of her past life before the boy’s eyes, while Eiri slips into an interesting form of obsession with his new spiritual friend. The following is a trip through pain, sin, redemption, artistry, beauty, and obsession, and even though the show is convinced that it can talk about all of these aspects, it may or may not only explore half of them properly. Eiri is a fairly stale protagonist with only a couple small traits thrown in to make him slightly interesting. His obsession with Cossette brings out some curious behaviors during the beginning, though as soon as he comes to accept his passion he just reverts back to acting like a random normal guy. Cossette doesn’t get interesting until the end of the series, when a gradual change of her usual actions is enough to suck the viewers in to find out what her deal is. The payoff for this is fine and all, but before that we’re treated to a boring little girl who plays the emotionless doll role without much fascination. While Cossette and Eiri carry the story, the supporting characters aren’t memorable or important to the story, and neither are their filler escapades with a freak grandfather clock in the middle of the main plot. The plot and the emotions that we are supposed to feel are always spelled out for us to instantaneously receive. The repetition of plot points and basic emotions within the span of 90 minutes turns this simplistic story into a pretentious test of patience. The aforementioned scenes focusing on the side characters serve no purpose to build up themes or greatly influence the main story. It’s easy to assume that the creators had no set purpose for everything they pull in the OVA, made especially clear with scatterbrained visual symbolism and gross overuse of repeated sequences. Vague, meaningless symbolism and forceful spoonfed storytelling do not go well together, and it only confuses the viewers beyond reason. 30 minutes would have been enough to show the content that mattered in this OVA. However, sitting through the aspects that slow down the story does result in a fair finale with a nice twist. I like the message regarding how artistic viewpoints alter whatever is portrayed in their work, to the point that preservation creates truth no matter what the reality previously was. A nice payoff after dealing with lots of bullshit. As one of Shinbou’s earlier works, it feels a hell of a lot more genuine than what he exploits so easily in his recent stuff. His cinematography is impressive in creating a sense of derangement or madness that mirrors the characters and environment. In some places however, he may have been trying a bit too hard to say something profound without actually doing something special. Placing the camera in an odd position and watching the audience attach meaning to it is a fun game for masochistic directors without solid vision. The actual art design and animation is mixed in terms of consistent quality. The praise I can give is for sheer ambition and vision, as watching the OVA by looking solely at the visuals appears to tell the meat of the story in a more intriguing way. Some scenes kick ass whenever they focus on the supernatural by using extreme colorization and dramatic lighting. Also noteworthy is the background work that holds up very well today, despite being over a decade old. Unfortunately, some bits of animation are subjected to the problem of repetition that the show can’t shake, one example being a blood splatter sequence shown about a dozen times. What’s worse, every scene that looks impressive is balanced by one that looks tacky or unpolished. The entire OVA is plagued by awkwardly drawn characters and lip syncing that doesn’t gel when movement gets dynamic. Despite a cool art direction that proves fruitful half the time, the animation as a whole is much too rocky to sit well with me. The soundtrack features Yuki Kajiura doing a splendid job providing dark, gothic tones which I adore when done right. Favorites include the main theme played throughout the show and during the climax, “Evocation” which ended up being a contender for favorite standalone Kajiura song, and the surprisingly memorable ED that got instrumental treatments in some episodes. I might lean to other works as her best, this is certainly above her average material and it ends up being the OVA’s finest achievement. The dub is underwhelming despite the stars (Johnny Yong Bosch, Michelle Ruff, Wendee Lee), and serves as another example of Sentai’s stale adaptation reputation. The OVA is much too messy to vouch for, and praising a pile of unpolished jewels and short lived treasures will only take it so high while the setbacks drag it down again. The story is unfocused, the art is inconsistent, and the few merits inbetween barely prop it up from collapsing completely. To put it lightly, this scatterbrained short series is an interesting experience, and I hope I can close out before that weak applause deteriorates from everything else. <u>Le Portrait De Petit Cossette (2004)</u>\: 4.8/10

Start a new discussion for Le Portrait de Petit Cossette anime. Please be fair to others, for the full rules do refer to the Discussion Rules page.