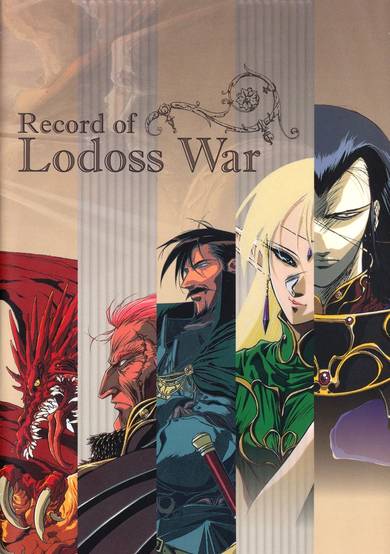 Created from the aftermath of the last great battle of the gods, Lodoss and its kingdoms have been plagued by war for thousands of years. As a quiet peace and unity finally become foreseeable over the land, an unknown evil begins to stir. An ancient witch has awakened, bent on preserving the island of Lodoss by creating political unbalance throughout the many kingdoms and keeping any one from maintaining central control. Only a mixed-race party of six young champions, led by the young warrior Parn, stand between this new threat and Lodoss' descent back into the darkness of war and destruction. (Source: ANN)
User Count4562
Favorites Count55
Start Date30th Jun 1990
Next ReleaseInvalid date
Popularity Rank2169
Rating Rank2705
Age RatingR
Age Rating Guide17+ (violence & profanity)
SubtypeOVA
Statusfinished

Prologue to the Legend

A group of adventurers, Parn the knight, Deedlit the elf, Ghim the dwarf, Woodchuck the thief, Slayn the wizard, and Etoh the cleric, enter the ruins of a great dwarven hall. After fending off an attack by gargoyles, they continue further into the hall, certain they are not alone. Deedlit is caught in a trap, and when Parn tries to rescue her, he is caught himself and they are separated from the others. In a flashback, we learn that Parn and his group have been tasked by King Fahn to find the sage, Wort, to see if he can provide them any information about Karla, the Grey Witch. Deedlit and Parn find a mural depicting an epic battle between the gods twenty years ago. As they continue through the catacombs, they awaken a green dragon. Unable to fight it, they attempt to run past it but are trapped when the rest of their group arrives. Together they are able to defeat the dragon, but his thrashing body causes the catacombs to collapse and force the group to flee the hall.

The Sword of the Dark Emperor

The War of Heroes

The Scepter of Domination

Really great fantasy anime. My favorite fantasy anime so far. Really well made for it's time. Characters are well written and have great voice actors. If you love Medieval stuff and fantasy, you will surely love this. Play some power metal when the combat scenes start and you will feel really hyped.

Start a new discussion for Lodoss-tou Senki anime. Please be fair to others, for the full rules do refer to the Discussion Rules page.