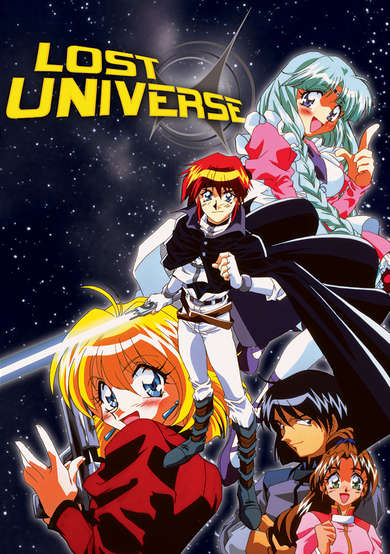 Millie Nocturne has one great goal in life: to be the best in the universe - at absolutely everything! But when she tries her hand at being the "best detective," she ends up an unwilling partner with two people who will change her life forever: Kane Blueriver, the psi-blade-wielding master of the starship Swordbreaker, and Canal, the smart-mouthed holographic image of the ship's computer. Join this unlikely trio on their adventures as they hurtle through space facing off against intergalactic crime lords, rogue starships, and hijackers dressed as chickens... and that's just the tip of the asteroid! (Source: RightStuf)
User Count1212
Favorites Count3
Start Date3rd Apr 1998
Next ReleaseInvalid date
Popularity Rank4421
Rating Rank5736
Age RatingPG
Age Rating GuideTeens 13 or older
SubtypeTV
Statusfinished

A Blade of Light Shines

Somewhere in outer space: Kain and Canary, on a mission, sneak into a huge artificial satellite of the crime organization ""Dugual Connection"". An auction is being held for stolen arts, illegal weapons, bionic creatures and any and all of the stolen goods one can imagine. Kain and Canary find Millie, an amateur investigator, working 'undercover.' They advise her to go home. Kain is stopped by the bouncers who make fun of Kain's coat. Kain gets angry and they begin to fight. Canary suddenly disappears. Millie is appalled at Kain's outrageous fighting... She thought he was an investigator for the Interstellar Police. When Millie is trapped and caught by the Crime Organization, a high-speed space ship attacks the satellite. It silences all weapons of the satellite and crashes through the outer wall.....the space ship is actually a morphed Canary, who has come to rescue Kain. Kain frees Millie and he destroys a hideous bio-monster using his powerful Psycho Blade. The trio return to Sword Br

Kain and Canary are staying at the Space Dock while their space ship, Sword Breaker, is undergoing repairs. Millie asks Kain to hire her as his assistant. Kain turns down her request. Meanwhile, Commander Raily of the Interstellar Police phones Kain. He refers to what happened at the satellite of the Crime Organization and forces Kain to accept a most urgent job.....a berserk computer has caused a mammoth space cruiser to go out of controlÅ .Kain must stop the cruiser!! Kain finds it is not easy to get in the runaway cruiser. Suddenly Millie, who had stowed away in Kain's ship, pops out and begins to shoot missiles. Thanks to her outstanding shooting, Kain is able to board the runaway cruiser. The runaway ship is on a collision course with the Space Dock and he finds it is impossible to change the ship's course or to stop it! Canary powers up Sword Breaker and manages to change the course of the runaway cruiser. (Millie is stunned by the incredible strength of Sword Breaker.) All of a s

Kain hired a trouble maker! Millie is good at cooking, but her problem is in the preparation of the meals ... breaking glassware, plates, explosions, etc.... the mornings on the ship always start out with a bang! Aboard Sword Breaker, Kain and crew are on their way to a space port to meet Commander Raily about a job. Raily likes Millie at first glance and is so taken with her, he almost forgets why he is meeting with Kain. He asks Kain to safely transport the witness of a crime to the planet where the trial is to be held. Kain rejects the job, but Millie signs the contract without Kain's approval! He is then forced to take the job because if he doesn't, he will have to pay a huge penalty. When Sword Breaker lands on the planet, Millie drives off with the witness. Kain follows but their car is blocked by pirates.....Kain, Millie and the witness are cornered! Without warning, the witness paralyzes the pirates with strong electromagnetic waves.....the witness is actually a morphed Canary!

Despite Canary's protest, Kain agrees to let Millie enter a beauty contest held in the famous beach resort of Sunzania. Should she win the contest, Millie promises to split the prize money with Kain. While Kain and Millie are strolling on the beach, all of a sudden the security system goes haywire and a robot guard chases Millie. Kain destroys the guard just before Millie is blown away. Meanwhile, a mysterious woman watches Kain in the crowd. At night, Kain and Millie take another walk on the beach front. Before they know it, they are attacked by a group of killers and Kain and Millie become separated. Suddenly, a bewitching woman appears in front of Kain. She is Carla, a boss of the killer crime organization ""Nitemare."" She is a merciless hunter and she attacks viciously and swiftly with a whip. Kain backs off. Millie attempts to come to Kain's rescue, but Carla fights off Millie. Kain accelerates his attack with the power of the Psycho Blade and knocks Carla's whip away at lightning

As Kain watches beautiful stars on his display screen, Canary is busy searching for new weapons in the shopping catalogue as she wants to buy a new beam-missile......and the kitchen is erupting as Millie is attempting to cook.......the usual start in the morning!! The visi-phone lights up and an old man comes up on the screen. He offers Kain a job to handle the security for a military weapons factory. Canary is happy at the prospect of visiting a weapons factory, but Millie complains about having to go to a deserted planet. In the meantime, at the crime organization ""Nitemare"", the old man who called Kain talks to a 'Nitemare' boss. The old man's name is Roy Glen. Glen wants to command the mission at the factory. The trio arrive at the factory via shuttle pod. Kain and Millie head for the caretaker's office while Canary goes into the factory to find weapons. While Canary is moving some missiles to the shuttle, Kain and Millie climb the steps to the top floor and open the door. The old

Highball is a ""female only"" nursing school ship. Kain, disguised as a woman, and Millie are among the students on a mission to protect the two major student groups who are in conflict with each other. On the day of the school's graduation performance exam, one of the students is injured as a result of the two fighting groups. That provokes Kain into lecturing them, which moves the students and helps them regain the spirit of fellowship.

Upon taking the job to search for a missing person, the trio arrive at planet Gambit. They quarrel over some minor thing and end up in a major quarrel with Kain and Millie on one side versus Canary on the other. The army of the killers from Nitemare attack Kain and MillieÅ . then attack Canary just when she finds the missing person. Canary is forced to deal with the tough and merciless killers by herself. Kain and Millie rush over to help her, which eventually brings victory and harmony to the trio.

Nina, from the Universal Guardian, and the trio arrive at a space port to escort the Minister of the Trevin kingdom. Because of a unique custom of the kingdom, they are forced to ride in a public space ship. All of a sudden, terrorists disguised in chicken costumes hijack the ship! The trio knock out some of the terrorists but get captured before finishing them off. However, Nina's courage under fire creates a chance for Kain to use his Psycho-Blade. Kain saves themÅ .another mission accomplished!

The trio receives an SOS call from a ghost ship in the asteroid belt, known as ""a graveyard for space ships."" They discover an unknown crystal inside the ship and bring it back to Sword Breaker. They discover the crystal, a super weapon from an ancient civilization, replaces space like a puzzle. Kain and Millie can't find the bathroom any where!! The crystal has made the ship a puzzle!! Just when they are about to give up, Millie finds a disk in a strange room. It plays music like a music box, and its melody leads Kain's Psycho-Blade to the crystal.

On a giant immigration ship, the trio take on a job to guard the energy resources for planet reclamation. A small group of children on the ship ask Kain to be their basketball coach. They have a game coming up with their older rivals to see who will control the basketball court. The thugs after the energy resources also attempt to seize the court because the ship's main control room is buried underneath it. When Kain and the children win their respective battles, the ship is about to arrive at her destination planet after a long voyage.

Start a new discussion for Lost Universe anime. Please be fair to others, for the full rules do refer to the Discussion Rules page.