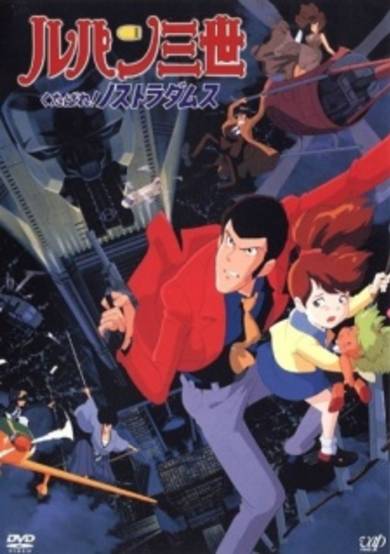 After a diamond heist in Brazil, Lupin hides the gem in a doll and boards a plane headed out of the country. While on board, the doll is stolen by a little girl named Julia, whose nanny is none other than Fujiko Mine. Before Lupin can get the doll back, the plane is hijacked and the girl is kidnapped. The kidnappers are after the same thing that Fujiko is after - a book of Nostradamus prophecies hidden in Julia's father's tower. Lupin and the gang join forces to save the girl, get the diamond back, and discover the secrets surrounding the strange book. (Source: ANN)
User Count893
Favorites Count2
Start Date22nd Apr 1995
Next ReleaseInvalid date
Popularity Rank5025
Rating Rank2262
Age RatingR
Age Rating GuideMild Nudity
Subtypemovie
Statusfinished

The storystarts interesting, but then it just drags. It beginswith Lupin and Jigen stealing a diamond in Brazil. Lupin hides the diamondinside a doll, because…plot point. They get on a plane to Atlanta with somefootball players, Fujiko, Julia the bratty kid and some hijackers. Julia stealsthe doll from Lupin and sees Fujiko who is taking care of the kid. Thehijackers have a bomb that works as a diversion and take Julia. Meanwhile acult is causing sensation because of the book of Nostradamus revelations.Fujiko takes Lupin and Jigen to this skyscraper, which belongs to her boss whois a presidential candidate. There is a vault where they keep the real book ofNostradamus, and she dumps to them all the information about the building andher plans, with the real book being in the safe of the building on the 200<sup>th</sup>floor. Fujiko then explains to her boss the kidnapping of his daughter and sheremains as a suspect. She escapes, but is got by the same kidnapper and losesher memory because of some wrist band with cult chip. Eventually, Fujiko regainsher memory and suspects of the wristbands on the football players. The samewrist bands have been applied to the football players who play in the buildingand are ordered to plant bomb-balls all over, planned by the cult chief who toldit as a real prophecy from the book and marked the skyscraper as Babel’s Towerthat will fall in flames because of God’s Wrath. Lupin wants to get into thesafe, but at first try is impossible, so he meets with his uncle at a prison toget some tips. His uncle made a glass eye which can be read by the computer atthe vault entrance. So the kidnappers are there too because they are in cahootswith the cult and Julia’s eyes can be read by the computer to open the vault.The chamber of the vault has some virtual reality system that requires to usegoogles which is a trap. Only Julia knows how to get Lupin’s out of theVR trap with a card inserted on the googles. Then the false prophet comes withJulia’s mother and threatens the gang to turn him over the book. There is afight, the false prophet shoots and gets the kidnapper who is in hell from thetrap of wearing the VR googles and activates the bombs from the building. Thebuilding collapses by explosions and there’s water everywhere. Cult guy fallsand dies. Lupin fights the kidnapper and saves Julia within the Nostradamusbook (which is useless). Julia returns to her parents. Everyone looks upset atwhere the building was. Sad song plays. Theanimation is fluid, the backgrounds are detailed and the colors are vibrant.Sometimes the characters change the color of hair/skin or get out of chartdesign, Fujiko for example, changes a lot of boob size between scenes. Somebackground characters don’t match Lupin’s world aesthetics because they looktoo cartoonish and seem out of place. The soundis very standard, with a few explosions, water sounds and characters screaminga lot. You can get tired from listening the characters saying the names of eachother repeatedly. Thecharacters are your typical, like Lupin, he's looking for some loot and women.Jigen, accompanies Lupin everywhere. Fujiko is mostly nice, and loses hermemory briefly... she has lots of different outfits and fanservice. Zenigata isgoofy, carrying one of his inventions and feeling sad because of Lupin's death.Goemon is just there to cut things.  Thekid Julia, is a super annoying brat, she has a little character development bythe middle of the movie, but who cares? The bad guys are a joke, I just don't understand their motives. The comedyis super enjoyable and also the action sequences. The most annoying part wouldbe the new characters, that don’t give much entertainment or liking. Overall, isvery funny. Watching Zenigata’s expressions; Lupin and Jigen falling thru agiant toilet and how Jigen has no eyes… or tries to hide them so you don’t seethem.

Start a new discussion for Lupin III: Farewell to Nostradamus anime. Please be fair to others, for the full rules do refer to the Discussion Rules page.