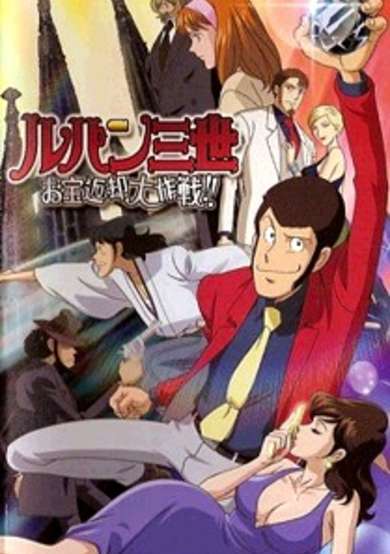 After robbing a Moscow casino right under Zenigata's nose, Lupin sets his sights on stealing the Trick Diamond. He and Jigen head to the estate of the recently deceased Mark Williams, another master thief who's had the diamond, as well as other treasures, in his possession for years. However, instead of finding the diamond, Lupin &amp; Jigen find Fujiko, who tells them about Mark's dying wish - Lupin must return all the treasures the old thief stole to their rightful place. If this is done in time, the location of the diamond will be revealed, and Lupin can use it to get the real treasure, hidden in Gaudí's Sagrada Familia. Returning the stolen goods isn't easy though, as Zenigata and the casino boss' ruthless gang are on Lupin and friends' tail. (Source: ANN)

Watching a random Lupin special is a crapshoot in a rigged Mafia casino, but sometimes, you get lucky. Lupin: Operation Return the Treasure is one such time: a solid example of what makes Lupin III one of my favorite anime properties, with a good mix of comedy, crazy capers and supernatural kookiness. The central story is a clever inversion of every other Lupin special: instead of stealing, Lupin and Jigen have to secretly return old treasure from around the world that was stolen by one of Lupin's old rivals in the hopes of getting an even bigger treasure. The rival is dead, but in anticipation that Lupin would come to steal his Trick Diamond, he entrusts his last will to Fujiko. Of course, Fujiko tries to play both Lupin and the Russian mafia in the hopes of selling the diamond before either of them can get their hands on it, but things quickly get out of hand. The story even seamlessly integrates Goemon, always a difficult task for any TV special, who comes across the crew while seeking vengeance for comrades that were killed by a Russian hitwoman, who also doubles as the bodyguard and lover of the head of the Russian mob. Despite the self-knowing twist of returning treasures instead of stealing them, both the characters and capers are familiar and fun. But perhaps the most memorable part of the special is its climax in Gaudi's most famous cathedral, the Sagrada Familia, which has just the right touch of heart and mysticism. The special doesn't quite reach the heights of First Contact or the Fuma Conspiracy, but it's such a solid movie that it would be a shame for any Lupin III fan to miss it.

Start a new discussion for Lupin III: Operation Return the Treasure anime. Please be fair to others, for the full rules do refer to the Discussion Rules page.