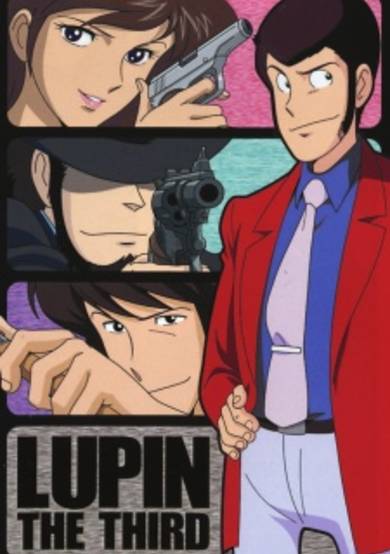 Stealthy, smug, sharp, and silly. These words only begin to describe the greatest thief in the world, Lupin the Third. Ever at his side are the quick-draw sharpshooter Daisuke Jigen and the deadly, honor-bound swordsman Goemon Ishikawa Besides the countless fabulous treasures and priceless gems he pursues across the world, Lupin’s target is the heart of one Fujiko Mine, a buxom beauty who’s just as often Lupin’s rival as she is his girlfriend. But getting away with the gold and the girl is rarely as simple as it first seems. The clever Fujiko is eager to run off with the treasure for herself. And the dogged Tokyo Police Inspector Zenigata has transferred to Interpol just to chase Lupin and his globe-trotting gang across any and all borders! What’s an international master criminal to do? (Source: Discotek Media)
User Count2744
Favorites Count31
Start Date3rd Oct 1977
Next ReleaseInvalid date
Popularity Rank2954
Rating Rank1004
Age RatingR
Age Rating GuideMild Nudity
SubtypeTV
Statusfinished

The Return of Lupin the 3rd

Notorious gangster, Al Capone left behind five tiles that reveal the location of his massive gold hoard when put together. Out of the five tiles, Lupin and Fujiko have three in their possession.

Wads of Bills Blossomed in the Sunset of Rio

Inspector Zenigata concocts an extravagant plan to finally capture Lupin by luring him in with a fake meteor made from 6 tons of pure gold. Low and behold, his plan backfires and Lupin and his gang make off with the meteor.

I Can Hear Nessie's Singing

Lupin sneaks into an old castle to steal a collection of priceless angel paintings, owned by the late Malcolm Hurst. Inside the castle, Lupin meets a mysterious girl named Flora, who knows the whereabouts of the angel paintings.

I'll Teach You How to Transport Gold Bars

Lupin and Jigen are out at sea attempting to retrieve the gold inside a sunken pirate ship. However, a female pirate gang interrupts their retrieval mission and both parties leave empty handed.

Will the Leaving Tower of Pisa Be Standing?

Lupin and his gang are in South Africa to receive a nautical chart from a retired Nazi that shows the location of a sunken Nazi treasure. However, two young German soldiers interrupt the exchange and a skirmish ensues.

Lupin and his gang are in the small city of San Pico in Central America. However, the city was in the midst of a war between the Government Forces and the Guerilla Army. Leading the Guerilla Army is Jigen’s old army pal, Giranco.

Unsurprisingly, Fujiko had once betrayed her heist partner Garb, known as the Grim Reaper and left him for dead. Garb, who has seemingly returned from the dead, is determined to kill Fujiko and has an uncanny ability to dodge bullets with ease.

Would You Like Ukiyo-e Blues? (Now Museum, Now You Don't)

A mysterious cult that idolizes a solid gold Virgin Mary statue abducts Fujiko and they’re planning to burn her at the stake as a witch. However, her kidnapper and the cult leader look vaguely familiar to Lupin. Have they crossed paths before?

Lupin has a horrible case of athlete’s foot and visits Dr. Budweiser, who is also a cloning expert, for treatment. The doctor takes a sample of Lupin’s skin under the guise of treating his Athlete’s foot, but the doctor has another plan up his sleeve.

Bet on the Monaco Grand Prix!

A mysterious message appears in the newspaper and Lupin takes it as a sign from this late grandfather, Lupin I, to reclaim his diamond keepsake.

Start a new discussion for Lupin III: Part II anime. Please be fair to others, for the full rules do refer to the Discussion Rules page.