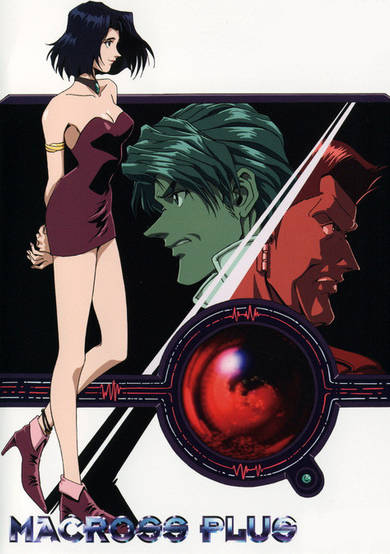 The year is 2040 and the galaxy is flourishing with several colonies and advanced technology. AI is near perfection and the current top idol is the near-completed Virturoid Idol Sharon Apple. All that is missing are her actual feelings, which instead are supplied by Myung Fang Lone. Sharon's debut concert is on planet Eden, where at the same time, fighter pilots Isamu Dyson and Guld Bowman battle over air superiority for the "Supernova Project." Isamu, Guld and Myung were once childhood friends, but after an accident seven years ago, they went their own separate ways. With Myung back in the picture, the old disputes are once again awakened. And when an unstable and illegal AI technique is installed in Sharon, the situation is worsened. (Source: ANN)

All Macross Plus released episodes

The Ministry of Defense is testing and developing a transforming super-stealth aircraft, a new advanced defense vehicle to counter alien attacks.

Computer generated pop star Sharon Apple has packed in the masses again for another of her best-selling concerts.

Pilots Guld Goa Bowman and Isamu Dyson are still fighting over the affections of the same woman, Myung. But Myung has plenty of problems of her own…

It's Time to End This

The "virtual idol" and computer-generated pop star Sharon Apple has discovered how to become an autonomous creature.

Macross is a strange beast. It has several individual series, each with a completely different tone. You've got The SDF Macross, which is mostly serious but with some decidedly Japanese bits, mainly the singing. Then you have 7, which features a man who controls his transforming space fighter via his guitar.(I'm not making that up). Then you have Plus, which is completely serious and pretty damn good. First off, I'd like to establish that this review is for the series, not the movie. I haven't seen the movie but I've heard good things about it. I also watched the dubbed version, for reasons which will become apparent. Anyway. Macross Plus centers on the Eden Test Fighter facility and the Supernova Project, which is a bid for the next variable fighter for active service. The candidates are the YF-19 and the YF-21, and it just so happens that the new test pilot for the 19, named Isamu Dyson(and voiced by none other than Bryan Cranston) has a history with the pilot of the -21, Guld Bowman. Their clashing personalities lead to trouble in the project, while other events conspire to shut down the project. Being that this show has only four episodes, that's pretty much all I can say without spoilers. Macross is known for it's superb technical designs, but up until this point the two main series were notorious for reusing stock animation. This is an OVA, however, and therefore has a lot less material to spread it's budget over, resulting in one of the best looking anime of the era. It's in that post-80's, early 90's look that is most recognizable in shows like Gundam 08th MS Team and the like, but with the dials cranked up to 11. The fighters in particular are beautifully rendered, with insane amounts of detail and fluidity of motion. Frame by frame, it's a technical design fan's dream. Music is divided into two sections. There's the usual idol singer, but the idol in this installation is actually a computer. This means the genre of song is changed to a sort of pre-EDM techno that's surreal to listen to. The background music, on the other hand...is by Kenji Kawai. Huh. So it's still pretty surreal and different, but that's not a bad thing. It's pretty excellent overall.   Characters are pretty good, with everyone being played pretty well. The main characters are the only ones who really get any time to grow though, and even then it seems a tiny bit rushed, and is the only weakness of the series in my opinion. Overall Macross Plus is a great entry into the franchise, and probably the best on it's own merits outside of DYRL. It's only four episodes and is well worth the watch.

Start a new discussion for Macross Plus anime. Please be fair to others, for the full rules do refer to the Discussion Rules page.