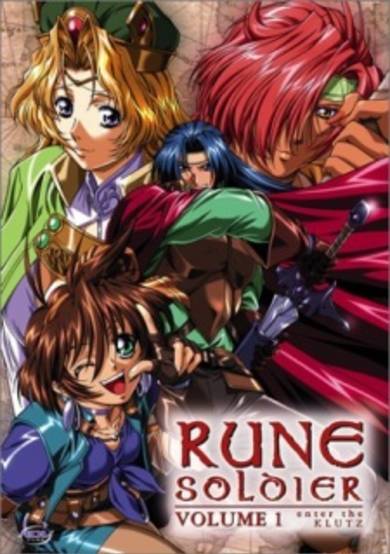 Spurred on by the promise of treasure, Melissa, Genie, and Merrill seek out an ancient ruin, but the entrance is sealed with magic. They return to town to find a magician to break the seal. They meet Louie, a magician in training. The girls brush him off, so Louie picks a fight with Genie, but he blows up the town bar in the process. Louie tracks down Melissa the next day to demand a second chance, but she is in the middle of a sacred ritual when he calls. Merrill and Genie try to stop him at the door, but Louie makes his own way in, to Melissa's shock.

Merrill and Genie scold Louie for crashing Melissa's ceremony, but with no other magician recruits in sight, Melissa reluctantly accepts him into the group. The four head out to the ruin, although Louie quickly finds himself doing more manual labor than magical spells. Despite the girls' initial misgivings, Louie does manage to open the entrance to the ruin with his magic. The party realizes, when they get inside, that any treasure which might have been there has long since been looted. In its place, they find a nest of angry goblins.

While fighting the goblins, Louie wields his magic wand like a club and breaks it. To make a new wand, he needs a branch from a 500 year old oak tree. The nearest forest with trees that old is the Tartious Forest, believed to be a home to demons. The girls are completely disgusted with Louie and refuse to help. A rival group of adventurers tries to get Louie to join them, but Louie suspects their underlying motives.

The girls decide to help Louie, who immediately causes trouble with a magic demon-summoning whistle. While the girls are busy handling demons, Louie goes toe to hoof against a wild boar. The group finds a suitable trree, but a beautiful elf named Celecia interrupts them. She promises she can find them a better branch in the elves' village. The girls are skeptical, but Louie overrides them and inadvertently leads the group into a trap. Locked up and facing certain death, Louie proposes a means of escape so stupid, it just might work...

Melissa accepts the job of giving some junior warrior priestesses some practical training. The goal of this training is to rid an ancient ruin of zombies. The usual group tags along, but wanting to save face in front of her juniors, Melissa can't bring herself to tell them Louie is her hero. As the party moves into the ruin, the foundation collapses and separates Melissa and Louie from the others. The two find themselves in an abandoned dungeon, surrounded by a corps of zombies. Can Louie's sword cut a path back to their friends?

Melissa's headaches double when a man shows up at the Mylee shrine professing his undying love. It's Conrad, Melissa's old fiance. Melissa puts Louie on the spot, saying that if Conrad can beat him in a duel, she'll return to Ramliearth. If not, Conrad can never come near her again. Unfortunately, Conrad has become a master swordsman. With only a week to train, it becomes obvious that Louie is the one in danger. Melissa tries to stop the fight, but it's too late. All she can do is watch and pray.

As the bookie for Louie and Conrad's duel, Merrill makes a fortune by betting on the dark horse--Louie. But, she gets hit with misfortune after misfortune, until the inn where Merrill is staying burns to the ground. With nowhere to go, Merrill becomes paranoid and starts avoiding everyone, even her friends. Louie comes to help her, convincing her to bury the treasure. He summons a clay golem to act as a guard, but the pair must go to extreme lengths to get it back after telling the golem not to let anyone touch it.

A Tearfull Festival of Mylee

The townspeople in Ohfun are busy preparing for the Mylee Appreciation Festival, which happens every five years. Meanwhile, Louie has been so engrossed in adventures, he forgot to do his homework. His instructor grounds him until it's complete. Louie works frantically to finish his tasks and barely makes it to the festival. At the festival, Melissa's three fans plot to embarrass Louie in front of her, but they end up dragging in Merrill and Genie instead. When the smoke clears, Melissa steps down and admits that Louie is her champion.

What Comes in Summer

It's the middle of the summer and Louie has taken a job as a porter. Ila takes advantage of this, and while out with her on the job, he notices it begin to snow. Returning to the Guild, Ila gets a letter from Master Banarl, a magician who retired to the Tower of the Four Great Magics to complete his weather control research. He asks the group to go with her to the tower to investigate. Along the way, the group meets the elf, Celecia, who joins them. But the road won't be easy with blizzards and demented nature spirits standing in their path.

The Tower of the Four Great Magics

Overcoming the fierce snowstorm, the group finally arrives at the Tower of the Four Great Magics. At the entrance, they are greeted by a Flesh Golem, the gate guard resurrected by Master Banarl. Despite some difficulties, they kill the golem and make their way into the lab. There, they find the magician's frozen remains along with a horde of vicious Flau, mad ice spiritss that freeze everything they touch. The girls create a diversion as Louie heads to the main control panel. When the Flau attack, Louie makes one last gamble...

Start a new discussion for Mahou Senshi Louie anime. Please be fair to others, for the full rules do refer to the Discussion Rules page.