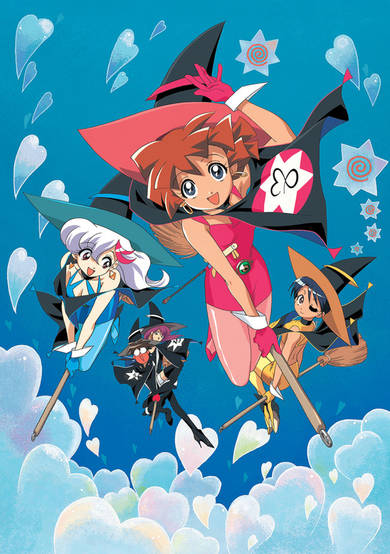 The aliens have been defeated, and the Bell has been transformed into a gigantic cherry tree. Now, the brave Magic User's Club must reconvene to deal with a new problem. Apparently, some inconsiderate persons left a skyscraper sized cherry tree in the middle of Tokyo, and it's become a major inconvenience to everyone in the city. Even though they have no idea who could have done such a thing, the Club feels strangely responsible and springs into action. Meanwhile, a mysterious person is spying on the magic club in the form of a small boy. (Source: ANN)
User Count963
Favorites Count3
Start Date7th Jul 1999
Next ReleaseInvalid date
Popularity Rank4875
Rating Rank4729
Age RatingPG
Age Rating GuideTeens 13 or older
SubtypeTV
Statusfinished

Sae, the Magic Club, and the Cherry Blossom Tree

The Magic User’s Club defeated a giant ship from outer space! But their close encounter left a huge cherry blossom tree in the middle of the city. Takeo calls a club meeting to deal with the tree, but their magic backfires…

Nanaka, a Cake, and a Dangerous Evening

Nanaka has had enough of her rude, careless family! She’s running away to live with Sae (again). When Akane drops by, the three girls set up a slumber party full of fun, laughter, and out-of-control magic.

It’s time for Parent-Teacher Meetings, and no one is dreading it more than Aburatsubo. He’s normally cool, calm and composed, but the mere mention of his mother sends him into a panic - and she’ll be arriving any minute now!

Sae, the Bathroom, and the Other Side of the Door

Today’s lesson for the Magic User’s Club is a spell that will let them teleport anywhere they want. But it doesn’t really work… or does it? Now, whenever they walk through a door, they have no idea what will be on the other side!

Akane, the Hiccups, and a Strange Relationship

Something’s wrong with Akane. Her magic is out of control, she’s constantly blushing, and… did she just ask Takeo to go out with her?! Time for the rest of the club (and Mizuha Miyama) to snoop around and get to the bottom of this!

Takakura, Origami, and the Secret Date

The club made origami using magic, and Sae did really well! But ever since then, something has been a bit off. Time keeps flashing around Sae, as her dreams and reality start mixing together. There’s only one person who can help…

Sae, a Tomato, and the Dance of the Paintbrush

The Culture Festival is coming, and Sae wants to make it something special! But the rest of the club isn’t quite so enthusiastic. What’s more, if they want the space to hold their own event, they’ll have to fight Miyama to get it!

Sae’s plans for the Culture Festival are quickly falling apart. Takeo is fighting with Miyama, everyone else is overbooked, and now a strange new person has appeared. Is this mysterious “Alice in Wonderland” a friend or a foe?

Long-Sleeved Kimonos, Shorts, and the Age of Joy

Sae wants to find the mysterious person she keeps seeing – and Akane knows just where to look. She leads Sae and Nanaka to a place where the two are quickly dressed in kimonos, handed scripts, and told to get ready for an audition!

Snow, the Colt, and a First Kiss

Sae is off to the Hokkaido countryside to visit the family farm! It’s fun to see her parents again, and to take care of the horses that she loves. But suddenly, Jurika appears. How did he get there, and what could he possibly want?

Start a new discussion for Mahoutsukai Tai! anime. Please be fair to others, for the full rules do refer to the Discussion Rules page.