Thirteen girls, each with the ability to materialize "Elements" and summon metallic guardians called "Childs" have been brought to Fuuka Academy to battle mysterious creatures called Orphans. Each with a different personality and background, they must decide who they truly care about and why they fight. 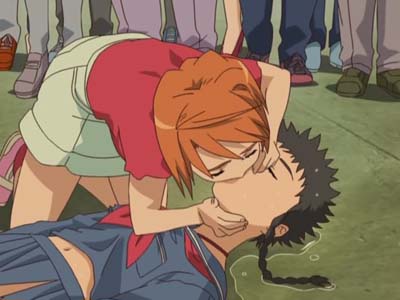 A Girl's Most Important Event ☆

Mai Tokiha and her brother Takumi are on a boat trip when a girl with a sword, Mikoto Minagi, is found in the water. They pull her aboard, but are attacked by Natsuki Kuga. The boat is destroyed in the battle between Mikoto and Natsuki, and Mai shows strange abilities. 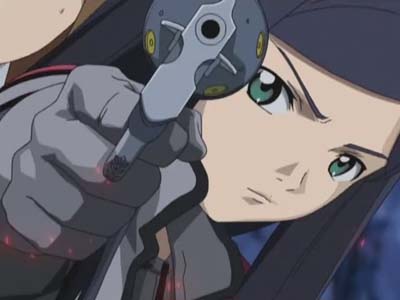 Mai and Takumi go to their first day at school. Mai skips class and bonds with Mikoto over a bowl of ramen. Takumi is attacked by a monster, and Mai and Natsuki put aside their differences to fight it. Mai calls forth Kagutsuchi and defeats the Orphan Later, Mashiro Kazahana explains to Mai that she is a HiME and that she is needed to fight Orphans. Mikoto becomes Mai's roommate. 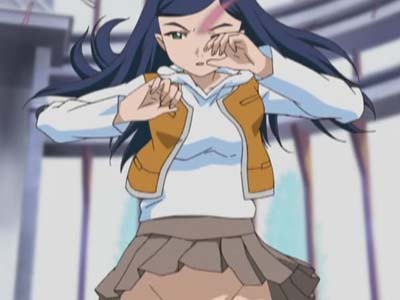 Mischief of the Wind

Little Orphans are stealing lingerie from the girls at school. Natsuki must walk around without underwear on a windy day, to her chagrin. Using Natsuki's underwear collection, they lure the Orphans and destroy them. An Orphan is attacking city buses, but Mai has her own problems. The stress of taking care of her ailing brother gets to her, and Yuuichi Tate comforts her in the rain. They later go back to teasing one another. Yuuichi and Shiho Munakata enlist Mai, Takumi and Mikoto to help them prepare for a wedding. Shiho worries that Yuuichi likes Mai, and makes Mai root for her love of Yuuichi. Midori Sugiura turns out to be a HiME and ends up as a teacher at the school. 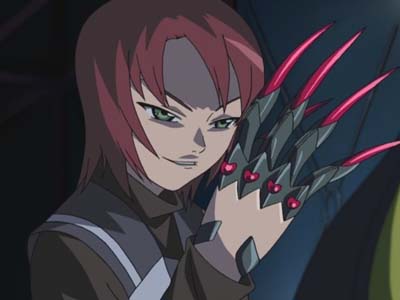 Mikoto falls under the influence of Nao Yuuki. Nao shows Mikoto how to lure men by posing as underage prostitutes, then use their powers to rob them. Mikoto has second thoughts, and the other HiME put a stop to it. 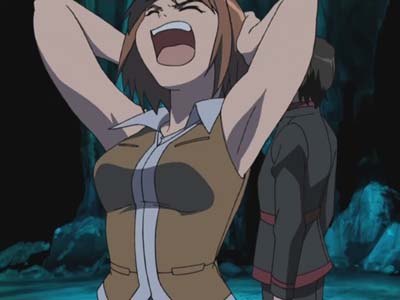 The school holds a festival. Akane Higurashi fights an Orphan to protect her boyfriend Kazuya, but Miyu Greer kills Akane's Child, and Kazuya dies. Nagi Homura explains that the life of the person who's most important to the HiME is forfeit, not the HiME's life as Akane thought. Mai fights with Kagutsuchi for the second time, and reveals her powers to Reito. 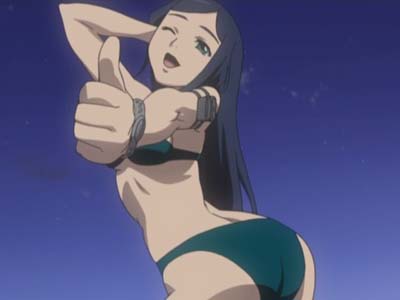 The Sea, the Maidens, and Natsuki's Secret ♪ 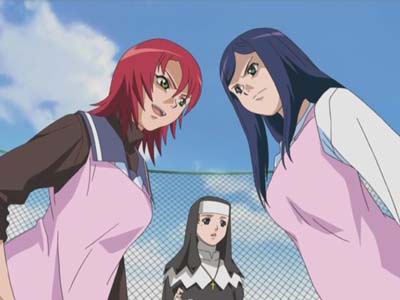 Mai and her friends have their cake baking contest organizaed by Midori Sugiura but the contest is interrupted by an Orphan. Takumi is attacked by another Orphan and it turns out Akira Okuzaki is a HiME — and a girl. She saves Takumi, who throws a birthday party for Mai.

It's a fun anime, no doubt about that, and if you're a hard core shoujo lover who enjoys a splash of fantasy and girl-fighter action then this anime is right up your alley.  And even if you're not, then you can treat yourself with all the fan-service the anime loves to provide. Either way, you're in for a real trip!

Please keep in mind that this is my first review. So, if make any mistakes or the review is not detailed enough; please message me and i'll correct my mistakes. Mai Hime Every once in a while, as an anime viewer, you happen to watch a show that surprises you. A show you watch because you really have nothing better to do,and your probably not really expecting much. You don't expect the show to touch you, to actually make you care about what happens on the screen. Mai-Hime was exactly this kind of show for me. I happened to run across it several months ago and, while I thought the first episode was good, I didn't really care about the prospect of watching High school girls fight each other with giant monsters. I just wasn't into that kind of thing, at the time. Then I picked the show back up and, while some of the earlier episodes are a little to comedic for my tastes, this show has turned into a personal favorite of mine.Story: 8The very first episode is fast paced and it raises several questions. But, don't worry these questions do get answered by the end. The first half of Mai-Hime is mostly character development and light hearted in nature. The second half, however, is dark and is when some of the best moments of the series come to the fore. One thing you will have to be prepared for is the fact that people will die, and alot of them to. This would have been an easy nine, if not for the ending. Which, thankfully, is foreshadowed. So, at least it didn't come out of nowhere.Art: 8You don't ever have to worry about telling characters apart because, from the main characters all the way down to the lowliest characters; everyone has their own unique design. Some of the enemy monsters are sort of generic looking, however. All the Child's look unique with Mai and Nao's being my personal favorite design.Facial expressions are well done, as well. And the battle scenes are well animated, yet there are better looking anime out there.Sound: 10The Music for Mai-Hime is fantastic, especially the battle music. The Seiyuu are very talented, Mai's in particular. Her seiyuu had to demonstrate range, as Mai goes through several different emotions throughout the course of the series. If I had to say one bad thing about the music, it would be that the intro music may mislead you.Character: 8Mai Hime has an exceptionally large cast, probably one of the largest i've seen in any entertainment medium. You may think that there would be no way possible to juggle a cast pushing the thirty's, but Mai Hime does an exceptional job. To be honest not every one gets as much attention as others, but just enough screen time to establish there personalities. That said, Mai Tokiha is the main character and gets by far the most screen time. She is, in my opinion, the lifeblood of Mai Hime. In my opinion, no show will ever truly "work" unless the protagonist is well done. Fortunately, Mai is a fully realized character who goes through many different emotions throughout the course of the series. In a word the series is worth watching just because of her. You may be fooled into believing she is just like any other female in an anime but, believe me, that is not the case.Enjoyment: 9The Show starts out slow, and those people who want constant battle may not enjoy that element of the series. But, know this: there is always a reason for the fights in this show and the after effects of the battles are just as important as the fights themselves, if not more so. Overall: 8With great music, realized characters, and an incredibly enjoyable second half; this show would have been an easy ten. If not for the slow start, that I understand some people will not enjoy, and a less than satisfying ending. That said: The journey to the end is more than worth it.

Surprisingly good anime, to say the least. When I first started watching Mai-Hime, I didn't really check out what it really was. I was simply expecting an anime with average entertainment, and I was wrong. It had a good story and a strong character development, though it can feel a bit slow in the start for some viewers. I personally got my eyes wide open in episode 8!  And it comes from a manga as far as I know. I don't really read manga, but I surely want to read this one in the future! To begin with, I didn't really plan to write a review since I rarely do it. But when I was a guy's review that only said untrue stuff and shit, I felt that this anime deserves way better respect. (There are better reviews out there.) This is still gonna be a bit short. Story (spoiler-free): Girls with superpower of some sort, and with a mecha pet known as "Child" gathers at a particular school to fight. And with the power of love and friendship, they will save the world.. Ops, wrong anime. But its along the line of saving the world or people to start with. But its without the friendship thingy. I don't thing they all is that good friends, thought they can live by eachothers. Infact they don't really know who have the powers or not to start with, other than it have to be a girl and its only 12 of them. To be true, its hard to say much about the story without spoiling too much.  Animation: I really like the animation. And to be made in 2004, I would think they did a really good job here. The backgrounds was perfect, and the characters had a good design. Ofcourse they could use light and dark tones ever so slightly better, but it's still a good artwork.  Sound: The sound is near perfect. I love the music, the sound-effects and the voice-actors or our heroes!  Characters: The character development is strong in this one. At least the anime convinced me though. Mai is a character I ended up liking a lot. How the whole story takes on her and her friends is one of the strong points in the anime.  Personal enjoyment: I newly finished the anime before I wrote this, and I enjoyed this anime. It was amazing, and is definitely hitting my top list of all anime, and a recommendation to many. I know there is a spin-off series, and I will watch it. When I looked at character list there, I got a bit sad that I didn't see Mai listed there at all. But I'm still gonna watch it (it's named Mai-Otome).

I really adore this anime, the only thing i was disappointed with was the filler episodes. They were great to watch but i just felt like they could of added more relevance to the story. It was also very sad and still makes me cry when i watch is XD

Start a new discussion for Mai-HiME anime. Please be fair to others, for the full rules do refer to the Discussion Rules page.