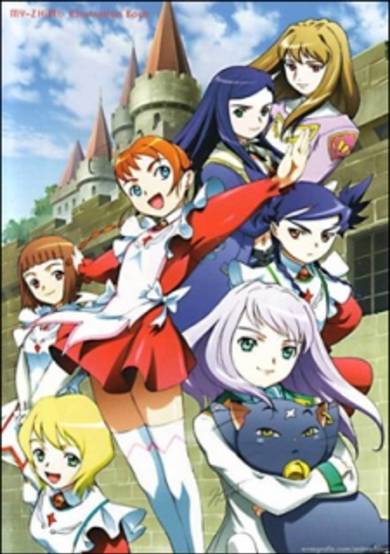 Arika Yumemiya has traveled far in search of her goal: the prestigious Gualderobe Academy. This is the school where young girls are trained to become Otomes, protectors of royal leaders throughout the lands. Here, Arika makes plenty of friends, but some enemies know something about her past that she does not. Nevertheless, her spirit and determination will keep pushing her forward. Adapted from its predecessor, Mai-HiME, this series is not a direct sequel, but an alternate universe setting featuring some of the Mai-HiME cast (though with different personalities). (Source: ANN)
User Count3578
Favorites Count17
Start Date7th Oct 2005
Next ReleaseInvalid date
Popularity Rank2516
Rating Rank3730
Age RatingPG
Age Rating GuideTeens 13 or older
SubtypeTV
Statusfinished

Young Arika Yumemiya travels to the Kingdom of Windbloom in order to become an Otome. She soon becomes acquainted with Garderobe student Nina, Nina's foster father Sergay, and the rebellious princess Mashiro.

A Hurricane Blowing Through the Garden of Maidens!?

Deeply impressed after witnessing the power of Meister Otome Shizuru Viola, Arika is more determined than ever to become a real Otome and attend the school of Garderobe. However, before her wish can become reality, certain conditions must be met.

In order to acquire permission to attend the Otome school of Garderobe, unexperienced Arika must face Nina in an exhibition battle during the coronation ceremony of Mashiro.

After a safe conclusion to the crisis of the previous episode, Arika is admitted to Garderobe and receives some important lessons on the way. She earns some new friends as well as some new enemies.

the Academy, the Uniform and Me

Arika's studentship is put in jeopardy when her uniform appears in a store. To prove that she didn't sell the uniform, Arika places her trust in her new friends to uncover the true culprit.

Upperclassman Shiho's jealousy towards Nina reaches catastrophic heights, as she decides to sabotage the school's swimming pool during sports class. Once again, it's up to Arika and her friends to clean up the mess.

The Blue Dance / Oath of the Maiden

While helping with the reconstruction of the royal palace, Arika hears a rumor about Mashiro. Arika and Mashiro find a mysterious machine beneath the castle.

After making a contract with Mashiro in the climax of the previous episode, Arika is now responsible for finding a way to cancel it. In order to learn more, Arika and her friends break into the Mausoleum of Garderobe.

As a part of the Otome training, Arika's Coral class begins a 100 km hiking trip through Aries. With randomly chosen pairs, the students enter into wilderness, when things start to go wrong for Arika and her partner Erstin.

That's the Great Crisis of a Maiden

Garderobe, Aries, Windbloom, and Artai move to rescue the two lost Coral students, as a mysterious group, Aswad, moves through the area.

Mai Otome is one of my favorite Anime. The Story is wonderful but lacking, many substories are missing and not mentioned in the series but the good thing is that they are releasing/released prequel (Mai Otome 0~sfir) and Sequel (Mai Otome Zwei) where the story becomes clearer as more and more details are revealed.The art is good, the costumes are exotic but not often found in the series maybe due to the civil environment. Vibrant colours though.The sound tracks used are great some are memorable especially the ending theme but sometimes you need to concentrate more on slower tempo tracks which reflects the mood of the scene.2 Mai Otome characters got a in my character Fav.Arika Yumemia, well this character can easily top your characters favorites (it already hit the top spot in my charac fav). The first 13 episodes are fascinating where you can see Arika's wonderful personality. The Overall character development is very good actually especially with characters such as Nagy and shizuru (Spot in the charac Fav).Enjoyment: The first time i've seen it I was really absorbed to the max for a month, you won't believe that (this might sound eccentric) I had dreams about Mai Otome and Couldn't wait to see the next episode (at that time I forced a 1 Episode/day limit on Anime in order to enjoy them the most).Overall I recommend all of you to enjoy this series which is filled with excitement, fun, pain, action, real life lessons, deepness , principles and values(A Must See Anime Rank: Masterpiece)

Start a new discussion for Mai-Otome anime. Please be fair to others, for the full rules do refer to the Discussion Rules page.