Maison Ikkoku is an old boarding house in the town of Clock Hill. It is relatively comfortable to live in, but unfortunately, it doesn’t provide its tenants with the excitement and modernity that normal college students prefer. So... they improvise. One of the students is 20-year-old Yusaku Godai, a calm and good-natured young man, who is doing his best to make friends and enjoy life. But being a typical introvert, he is often teased and taken advantage of by his other, more assertive roommates. Too stressed to continue living this way, he makes a decision to move out to a more peaceful residence. However, just as he is about to leave the house, he bumps into the beautiful Kyoko Otonashi, who introduces herself as the new manager. For Godai, this is love at first sight, and even though he was set on finding a new place, her charm allows him to see the light at the end of the tunnel. However, despite her youth and kind nature, Kyoko is actually a widow who lost her husband in a tragic accident. This has left her scarred and very vulnerable, and even though she does her best to be positive, it is evident that depression is taking over her. Godai and Kyoko quickly become very close, and he makes it his ultimate goal in life to make her happy, no matter what. 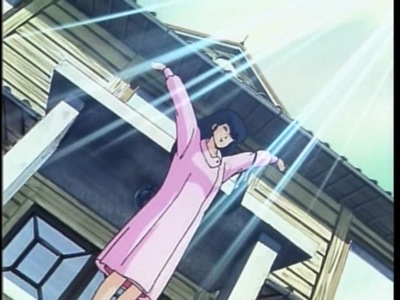 Sorry to Keep You Waiting! I Am Otonashi Kyoko!

Yusaku Godai is fed-up with life as a ronin and his horrible housemates, namely loud and brash Mrs. Ichinose, her bratty son Kentaro, sexy Akemi Roppongi, and the mysterious Yotsuya. As he finally packs his bags and heads for the door he meets Maison Ikkoku's new manager...Kyoko Otonashi. Its love at first sight for Godai, so he toughs it out in order to get to meet the gorgeous new manager a bit better. 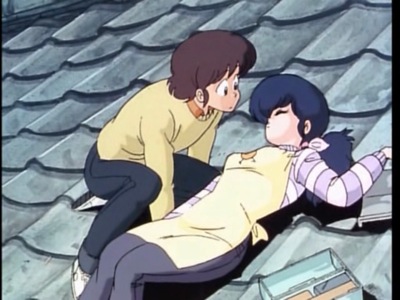 Love Is in the Air! Which One Does Kyoko Love Best?

Godai decides that since its Kyoko's first Christmas at Maison Ikkoku, this would be a great opportunity to buy her a present and tell her how he feels. As will become the norm, he chickens out when the Ichinose's arrive. Meanwhile, he learns from Akemi that Kyoko is already seeing someone and these suspicions are confirmed when he finds a sleeping Kyoko mention someone named ""Soichiro"" on the roof. Hearts on Fire in the Dark! All Alone with Kyoko

With his entrance exams bearing down on him, Godai just can't seem to focus. Kyoko decides its up to her to stop the other tenants from interrupting his studies, but what she doesn't know is that Godai's thoughts slip everytime she's in the room. And just as things are about to settle down...the power goes out. Kyoko's determined to fix the problem and Godai offers his help, but is he really trying to be a good tenant, or does he want Kyoko all alone in the attic? 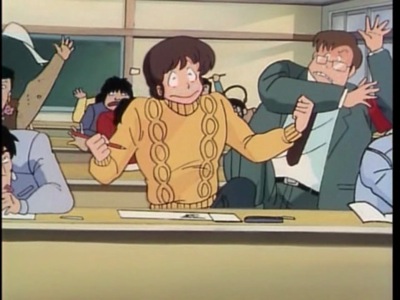 Kyoko's Heart Goes Pitty-Pat! Godai Is Put to the Test

Test time has finally arrived for Godai. As he does all the last minute cramming he can get away with Yotsuya, Ichinose, and Akemi take bets on which school's will reject him. Kyoko does her best to keep them out of Godai's way, but it doesn't do any good. As Godai heads off to take his tests, he misinterprets Kyoko's words of encouragement as a sign of affection, and can't stop thinking about it long enough to do well on a single test. With only one school left, Godai faces another year as a ronin, or overcoming all his distractions to become a full-fleged college student. 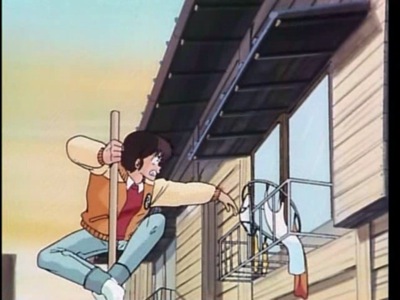 Kyoko's Climbing the Walls! Godai's Headed For the Hills

Godai's grandmother arrives to inform Godai that if he doesn't get into a college, his family will no longer let him stay in Tokyo. Godai does his best to hide from her, but with Kyoko's help they finally track him down, just in time to realize he's going to get to go to college. 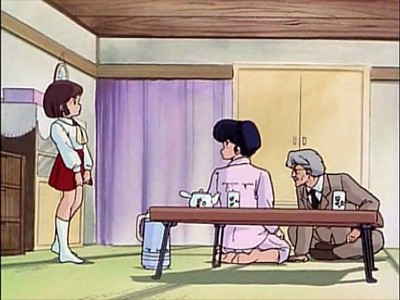 The secret sadness that Kyoko has kept hidden for so long is finally revealed as Godai realizes that Kyoko is a widow. Visiting Soichiro's grave, Godai asks for whom he is offering incense ad realizes that it is Kyoko's late husband. Afterwards, as the two of them walk home, Godai can't help but feel that he has no chance to win Kyoko's heart from a dead man. 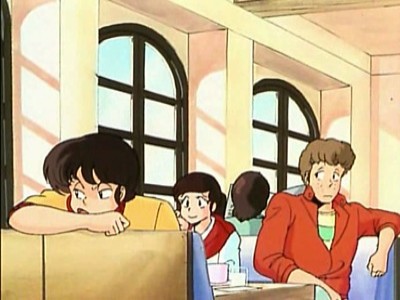 Godai's Agony! The One Kyoko Loves

Mr. Otonashi offers Godai a job tutoring Ikuko, who insists that if she is to have a tutor that it must be Godai. Seeing this as a way to endear himself to Kyoko and to earn a steady paycheck, Godai agrees. Kyoko begins to worry when the other tenants put the idea in her head that Godai might have a thing for Ikuko, and tries her best to resist the idea of Ikuko having a new tutor. Godai's Unspeakable Declaration! If You're Going to Do It,Do It!

Celebrating their arrival into college life, Godai and Sakamoto go out drinking. Feeling depressed about his situation with Kyoko, Godai confides in Sakamoto, who recommends a bit of liquid courage to help Godai tell Kyoko how he feels. Once they arrive back at Maison Ikkoku, Godai not only tells Kyoko how he feels, but the entire neighborhood as well. After his announcement, he marches off to his room with Kyoko in his arms, seemingly ready for a night of passion! 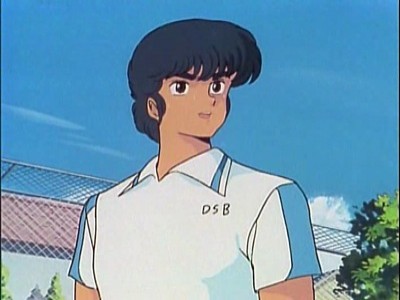 The Mysterious Tennis Coach is the Rival of Love

Mrs. Ichinose decides that Kyoko's been much to glum lately with worrying about Godai's confession and her always looming regret over Soichiro's death, so she signs them both up for tennis lessons. The neighbors confide that the tennis coach is someone they'd have no problem leaving their husbands for. The tennis coach, Shun Mitaka, upon meeting Kyoko instantly becomes enamoured with her, and little does Kyoko know, but Mitaka will become the man she'll come to depend on quite a bit over the next few years, and after Godai's recent antics, she has no problem accepting his friendly overtones. 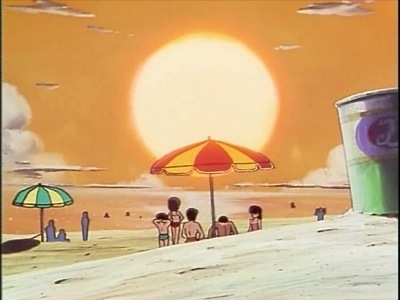 Love Panic on the Beach!

A depressed Kentaro confides to Godai that his family is too poor to ever take him on a vacation. This reminds Godai of his on youth, when he had to stay and work at his family's restaurant while all the other kids in his class went on their summer vacations. Godai happily agrees to take Kentaro to the beach so that he won't have to suffer the teasing of the kids in his class. Mrs. Ichinose is reluctant to leave Kentaro alone with Godai, so Kyoko offers to go along with them, which Godai decides to use as a chance to get close with the Manager. Soon his happiness fades when Ikuko decides to come as well, and Mitaka arrives at Maison Ikkoku to drive everyone there. Feeling extremely dejected at all the new company, Godai makes the discovery that the children have smuggled Soichiro, the Manager's dog, into the car with them. Pulling over to take a break, Godai learns that Mitaka is deathly afraid of dogs, and discovers his rival's one weakness.

Maison Ikkoku is a complete anime adaption of Takahashi's manga, infact it is the only complete adaption of Takahashi's longer works. On to the review... ***Story*** ****The premise of the series is Godai's pursuit of Kyoko (as you might have guessed) but this also runs parallel to the real core which is Godai's (and Kyoko's) personal development. Godai must develop himself from a ronan into a man while Kyoko must release herself of her emotional baggage and become ready for new romantic commitments. This usually takes the form of comedic and romantic slice of life pieces which are dotted with the shenanigans of the rest of the Maison Ikkoku building. ****** Maison Ikkoku's story is absolutely wonderful. As I have already stated, it is a complete adaption and the anime is fully rounded (you will not be left wanting afterwards, only despondent that it is over) but it is a case of "two steps forward, one step back" romance. The show's peak is from about halfway and onwards, earlier episodes are slower paced but nonetheless are enjoyable, light, slice of life pieces. There are twists in the road throughout the story that are emotionally gut-wrenching and heartwarming, as well as funny. Maison Ikkoku is also distinguishable form other slice of life pieces by its age... The 1980s setting makes for a refreshing setting for character interactions. ***Animation*** Fans of hand drawn animation will love Maison Ikkoku, the quality of animation is consistently excellent and the setting is oozing romance and wonder (as can be expected from Studio DEEN). If a representative were chosen to defend hand-drawn TV anime, Maison Ikkoku would be the ideal candidate. ***Sound*** The OP of the first 2 seasons is one of my favorites. Other than that, the OPs and EDs are slow paced and romantic affairs which suits the setting well. The theme of the anime is an excellent slow paced harmonica tune, which illuminates the romantic setting perfectly and is rather memorable. The seiyuus are also perfect; none are lacking in any manner. The English dub is great. At about Ep. 37 (the license was dropped and picked up later), one or two VAs changed, including Godai, but the dub is still of considerable quality. ***Characters*** The heart and soul of the anime - as a truly complete love story the main characters develop marvelously and are truly relate-able. What makes the anime so emotional to watch is the realism of the characters: they really feel like normal people who have been animated on screen. The side characters offer good comic relief from the romance part of the story and almost act as the comical villains of the piece, revelling and aiding in Godai's misery! ***Enjoyment*** Some episodes will be gut-wrenching, others will be heartwarming, others lightly comical but it should also be noted that many, particularly during the early half of the show, will be filler. Of course this is important in offering a break in-between the emotionally charged episodes (and you do learn more about the characters) but the show can only be enjoyed with a fair amount of patience. The anime is best enjoyed over a long period, just to savor the intense and brief periods of romantic tension. ***Overall*** I struggle to be critical of Maison Ikkoku's long winded story when it is so true to real life romance. You will know straight from episode 1 that it will require a fair investment to watch Maison Ikkoku... but the payoff is enormous - and eternal. ***Getting a hold of Maison ikkoku*** A quick word on the the releases for this anime. The DVD release of this anime is pretty collectible. When it was re-licensed for DVD by Viz Media in 2002, they only released it in fairly limited counts and the last volume was cut off early - Making the DVDs [astronomically expensive][1]. The new Blu-Ray release isn't any cheaper either. So unless your Richie Rich, reside yourself to the fact that the Fan-sub will be your only option. (By the time you read this, an HD fansub could also be available). [1]: http://www.examiner.com/article/top-10-most-expensive-anime-box-sets-part-4

when i watched it i could not stop myself untill series stopped. all the character development and the side characters are beautiful.

Start a new discussion for Maison Ikkoku anime. Please be fair to others, for the full rules do refer to the Discussion Rules page.