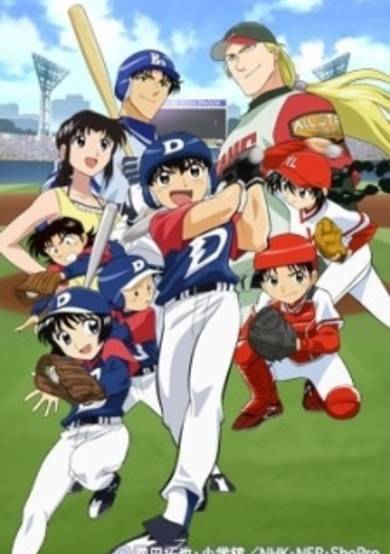 Honda Shigeharu is a Major League batter on the rise. His son Gorou is a Little League pitcher who one day hopes to follow in his father's footsteps. Hoshino Momoko is Gorou's school teacher, and the first woman Shigeharu has been interested in since the death of Gorou's mother. The destines of these three individuals will become intertwined as father and son experience both heartbreak and triumph on the baseball diamond. But when an unspeakable tragedy visits the family, it will take everything they have to pick up the pieces and reclaim their dreams. (Source: ANN)
User Count6598
Favorites Count96
Start Date13th Nov 2004
Next ReleaseInvalid date
Popularity Rank1683
Rating Rank701
Age RatingPG
Age Rating GuideTeens 13 or older
SubtypeTV
Statusfinished 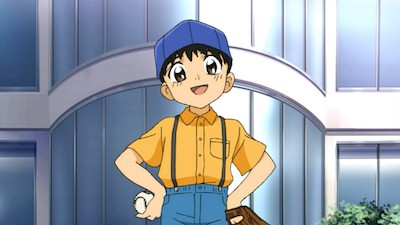 Goro is a young 5 year old boy who admires his Father. His father is one of the star pitchers for the Yokohama Blue Oceans, but when his father injures his shoulder, young Goro must decide what is more important to him- following his love of the game or following his Father's wishes 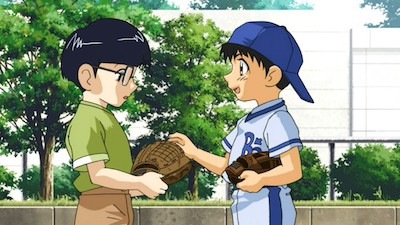 Goro disregards his father's advice and decides to continue training to become a future Pro pitcher. Meanwhile, his father is visited by his old friend and teammate, Shigeno. Shigeno says Honda's true abilities have always been in pitching and not batting, but Honda must decide on his own whether to continue baseball by focusing on hitting or find an entirely new occupation. I Hate You, Daddy!

Goro meets and befriends another little boy named Toshiya, with whom he plays catch. During one of their sessions, they witness a Little League team in play and decide they want to become Little Leaguers. Goro's father forbids it due to the use of hard baseballs. Can Honda reach his son and show him the true reason he won't let him play before they lose their bond? A Birthday One Day Late

Due to her consistent care of his son, Goro, Honda begins to see Goro's nursery school teacher, Momoko Shimizu, in a romantic light. He makes the decision to propose to her after Goro advances from her school. Momoko is asked by Honda to take Goro out for his birthday, as he plans to celebrate it with him a day later. 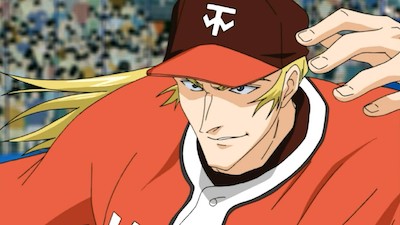 The Man From the Majors

Joe Gibson, a Major League pitcher, has come over to Japan due to a wealthy amount of money he is to receive. Honda decides he will hit a home run off of Gibson at all costs. Honda is successful in his first bat against Gibson, so Gibson retaliates with a beanball to the head. Honda falls unconscious, but he later gets up and goes to first base as though everything is okay. That night after celebrating with his son Honda realizes something is wrong. As he tries to reach his son and give him one final farewell he falls unconscious again and dies. Goro tries to wake his dad up the next day to no success. He is diagnosed as dead at the hospital and Goro's Uncle steps in to take him. Goro runs to his nursery teacher, Shimizu, who has just revealed she was engaged to Honda. She agrees to become Goro's new mom and take care of him over his Uncle It has been 3 years since his dad passed away, but at age 9 Goro is finally old enough to enter Little League Baseball. He returns to the field of the Mifune Dolphins, but when he arrives he learns they only have 5 players and that the team could be folding. To make things worse the soccer club has gotten permission from the city to fully take control of the field. The coach recommends Goro goes to the other Little League team in the city, but Goro is determined to play for the Dolphins and begins recruiting his classmates to play. 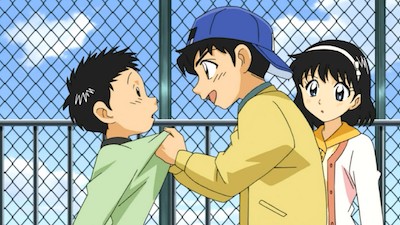 Sawamura decides to get rid of Goro's mitt after Komori decides to play baseball. Komori decides to confront Sawamura about it and is able to prevent the mitt from being thrown into the neighboring river. Neither realize that Goro has followed the two of them. Goro confronts Sawamura about his lack of thinking about people's feelings. After realizing Komori is indeed his own individual Sawamura goes and apologizes to him and Goro. Afterwards he asks permission to join Mifune's baseball. Alone on the Mound

Mifune begins playing the adult sandlot team in an effort to get privileges back to play on the field, but Goro's new teammates aren't sure if they should trust this arrogant rookie who has never practiced with them before. Showdown in the Rain

The adult sandlot team has been taking it easy on the kids. When rain begins to fall the city wants them to call the game and give the adults the win, but the sandlotters are determined to let the Little Leaguers have this one shot at glory. Can Goro keep pitching control in the rain?

Major was my first baseball anime. One of the longest and most popular baseball anime, I am honestly surprised that no one has made a review for this show yet. After enjoying this show a few years ago, I'm now rewatching it and wanted to write a review to help others decide. Story Major S1 is split between two major story arcs. The very early life of Goro and the circumstances of his family make up the first half. The second part of the season deals with Goro's first team baseball experience and their drive to win the regional tournament. While the second half is rather typical of sports anime, the first arc is touching and lays down much of Goro's early motivation character development. Animation/Sound The animation and sound while not being particular good, they do get the job done. The sound of a metal bat hitting a baseball is still very crisp. Character The cast of characters are what you might expect from a shounen sports anime. Head strong main character, supportive family, and the usual bag of teammates. Aside from a couple episodes devoted to his family and teammates, Goro is always the center of the show. Overall The beginning of a long running series will usually make or break your enjoyment of the series as a whole. While the baseball action is rather weak this season (for obvious reasons), more attention is dealt towards Goro's early life development. There's much to like here if sports anime interests you.

Start a new discussion for Major S1 anime. Please be fair to others, for the full rules do refer to the Discussion Rules page.